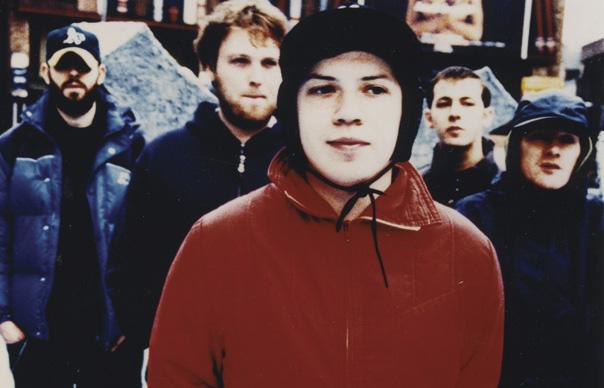 By 1999, Mogwai had a reputation. Their early, John Peel-approved singles saw them numbered alongside Tortoise and Godspeed You! Black Emperor in a transatlantic post-rock movement, although they were in their teens, from Glasgow, and shared some decidedly lowbrow predilections: for Black Sabbath, Celtic FC, and fortified wine. Their music was thoughtful and melodic, but also loud and confrontational. A European tour featured sets at a volume that ruptured eardrums. A remix album featured noiseniks like μ-Ziq, Alec Empire and Kevin Shields, entitled Kicking A Dead Pig. Supporting the Manic Street Preachers in 1998, Uncut watched them play a bellicose “Like Herod”, 10 minutes of noodling that suddenly erupted into a broiling tumult of feedback that persisted until the end of the set. As Manics fans jammed fingers in ears and glasses rained down, bassist Dominic Aitchison walked to the front of the stage, turned his back to the crowd, and dropped his trousers.

For second album, Come On Die Young, Mogwai recorded outside Scotland for the first time, decamping to Dave Fridmann’s Tarbox Road studio in upstate New York. There were few immediate signs of a fresh maturity: a magazine feature of the time found Stuart Braithwaite and new recruit Barry Burns refining something they called “the paedophile chord”. But the finished Come On Die Young offered something quite unforeseen. Melancholy and hollowed out, with Burns filling out the spaces between wandering bass and sparse drums with piano, keyboard and flute, this music was decidedly low-key. It was not immediate. Nor was it possessed of bold messages or complicated time signatures. But in gentle, unfolding suites like “Chocky” and “Waltz With Aiden” lay something enriching, a gloomy introspection traceable to slowcore groups like Low or Codeine, but also further back, to post-punk touchstones like The Cure’s Faith or Joy Division’s Closer. The opening “Punk Rock” samples an Iggy Pop interview on Canadian TV: “I don’t know Johnny Rotten… but I’m sure he puts as much blood and sweat into what he does as Sigmund Freud did. You see, what sounds to you like a big load of trashy old noise is in fact the brilliant music of a genius… myself.” The music itself, though, is spidery and pensive, huffing on Iggy’s spirited iconoclasm, and breathing it out at a hush.

Fifteen years on, this reissue expands the original album to a four LP box and double CD. Much of the bonus material includes unreleased takes from the Chem19 studios in Glasgow and the pre-Tarbox CAVA sessions. There are some valuable additions. Included is the original “Helps Both Ways”, featuring American football commentary from the NFL’s John Madden (for legal reasons, replaced on the album proper by footage from a college game). The previously unheard CAVA sessions track “Spoon Test” and eight-minute rarity “Hugh Dallas” are both worthy of rediscovery, while deleted 2001 EP Travels In Constants is included in full, notably a piano cover of Papa M’s “Arundel”.

The body of Come On Die Young, though, features some of Mogwai’s most remarkable music. For all its prevalent calm, there are crescendos, in the shape of slow-burner “Ex Cowboy” and the 10-minute “Christmas Steps” – a build from pensive guitar chimes to menacing Shellac thrash, finally relenting to elegiac violin courtesy of Long Fin Killie’s Luke Sutherland. The slide guitar-accompanied “Cody”, meanwhile, remains the band’s finest vocal moment, Stuart Braithwaite breathing softly of late night drives where passing streetlights come to resemble illuminated fairground carousels.
While Mogwai themselves have always been reticent to ascribe meaning or concept to their music, their playful titling opens up a world of its own. Non-album rarity “Nick Drake” is a Tortoise-like eddy named after the late English folk guitarist then only in the first fits of reassessment. The tension-release motions of “Kappa” takes its name from a brand of sportswear favoured by the Scottish ned, which Mogwai members wore with pride. The album bows out with a sombre trombone refrain dashed with wintery electronics, so of course it stands to reason it should be titled “Punk Rock/Puff Daddy/Antichrist”.

There is a strange disconnect here. For all their mischief and confrontation, Mogwai’s own music is a serious thing. Here, though, a vision is coming into focus. Making ears bleed was all well and good; but here, somewhere between euphoria and sadness, there was a rich seam waiting to be tapped. It’s a formula that’s served Mogwai well since, but they’ve not yet improved on the mesmeric meditations of Come On Die Young.
Louis Pattison

Q&A
Stuart Braithwaite
What do you remember about the recording of CODY?
I remember it really vividly. We were really excited about recording with Dave Fridmann, and he and his family made us really welcome. His Tarbox Road studio is in the middle of nowhere in upstate New York – it’s about 30 minutes from the closest town. The main shop in that town specialised in hunting gear. I remember one time we were out buying stuff – probably [American fortified wine] MD20/20 – and a guy was targeting us with his gun’s laser target, which was a wee bit scary. But working with Dave was great. We were really prepared and he contributed a lot in terms of extra instrumentation and ideas.

At the time, Mogwai had developed a reputation as a loud band. But CODY is largely a thing of quiet restraint. Was this a matter of conscious intent – to go against what was expected of you?
I think we wanted to show that there was more to our music than radical dynamic shifts, and definitely had that in mind. A lot of very minimal records like Seventeen Seconds by The Cure and Spiderland by Slint were influencing us at the time too. I think it’s aged reasonably well. We tend to avoid doing anything gimmicky on our records, which hopefully helps them from sounding too time-specific. As far as our catalogue I think it has its own place. I still like all the songs and I’m pretty proud that such a bleak record made it into the charts – especially as records actually still sold back then.

Did you get Iggy Pop’s blessing to use the speech on ‘Punk Rock’ – or do you know if he heard it later on?
We didn’t, though I’ve been told that he’s heard it since and thought it was cool. I hope it’s true!
INTERVIEW: LOUIS PATTISON