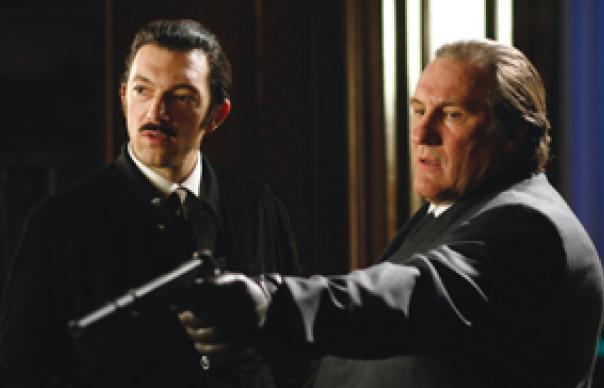 Throughout the 1960s and ‘70s Jacques Mesrine was France’s most wanted man, something of a cult figure: think Dillinger meets Clyde. He multi-tasked fiendishly. Robbed banks. Kidnapped millionaires. Made “impossible” escapes from maximum security prisons – and even from the courtroom during his own high-profile trial. A master of disguise, he was known as “The Man With A Thousand Faces”. He was also a cold, ruthless killer when necessary, and sometimes when not. Ultimately he was gunned down in a hail of police bullets, which is where this epic yet gritty two-part film, based on memoirs he began while incarcerated, comes in, before sending us on a rollercoaster ride of flashbacks.

Mesrine is a role any actor would give everything for, and the electric Vincent Cassel does just that. Switching strange hairstyles and weight fluctuations he makes the super-villain as prickly and complex as Tony Montana. And Richet, given such a gold-mine of material, has a ball. This atypically French director takes on the proud heritage of American gangster movies and, wickedly, trumps them. Mesrine, who was no stranger to the canon of gangster lore, or indeed to egomania, would approve.

Split into two films over four hours, there isn’t a minute where the breathless tale treads water. The first movie, Killer Instinct, introduces us to the young Jacques, an ex-soldier traumatised by the Algerian war. Eager for thrills, untroubled by morals, racing through heists and women, he climbs the crime ladder of 60s Paris, mentored by Guido (Depardieu, relishing his Don Corleone moment.) Imperilled, Mesrine relocates to Montreal, where he becomes ever more ambitious and notorious.

In Public Enemy No. 1 he’s captured and returned to France. But if the first part is Goodfellas meets The Godfather, the second throws in heart-stoppingly exciting blasts of Bullit and Papillon. (In fact while individual scenes have the itchy urgency of Mann, the whole has the sweep of Scorsese, the grandeur of Leone’s Once Upon A Time In America). He escapes again, pitching himself alongside Francois Besse (Amalric) as an anti-establishment rebel, as a pliant media inflates the Robin Hood myth. At one point he attempts to break back IN to jail, on a point of principle. Mesrine’s stunts are by now deranged. And most of them succeed. This is partly down to the ineptitude of the police, who he relishes taunting. When they do finally reduce him to a bloody pulp, his girlfriend (Sagnier) is more shocked that they’ve killed her dog.

Such an unsentimental spin recalls Ferrara’s King Of New York, and Richet shows throughout this roaring marathon that he’s not only learned from the genre’s masters but can match them, too.