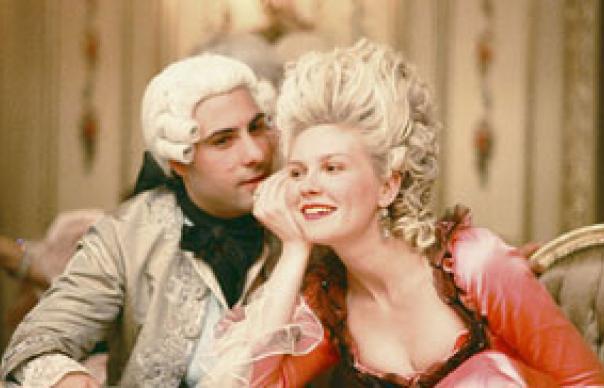 A novel spin on the costume genre, Marie Antoinette – Sofia Coppola’s follow-up to Lost In Translation – depicts the corridors of power as seen by a spoilt aristocratic ingŽnue: an eighteenth-century Paris (or Versailles) Hilton. Kirsten Dunst plays the sheep-loving monarch, a teenage Austrian princess sent to France to form a marital and political alliance with King Louis XVI. Unfortunately His Majesty (Schwartzman) is a gauche ninny, while life at court is ruled by oppressively stiff rules of etiquette. The young Queen soon finds an escape in wanton expenditure, parties and amateur shepherdessing, blithely unaware that revolution is approaching.
Coppola enjoys herself with anachronism, most notably in making the young queen a Californian airhead centuries before her time. The soundtrack is laden with post-punk hits, as if making a connection between 1780s and 1980s excesses – but, while the opening burst of Gang Of Four comes as a bracing shock, later choices (Siouxsie and the Banshees, Bow Wow Wow) are just that bit too obvious for real effect.

Gorgeously shot by Lance Acord, the film is much more like a costume drama in the traditional grand fashion than you would expect from a director with Coppola’s cutting-edge rep. And, despite an elegant handling of ironies in the first half hour, the film quickly becomes much straighter and staider than it promised. Still, Coppola has a dream cast – apart from a sympathetic, sparkly Dunst, the show is stolen by Asia Argento as the scandalous Countess du Barry and by the magnificently crusty Rip Torn as the old Louis XV. A lavish underachievement, nevertheless Marie Antoinette is a tender and elegant film: wilfully superficial, as befits the portrait of a superficial, doomed culture, but hard not to enjoy.