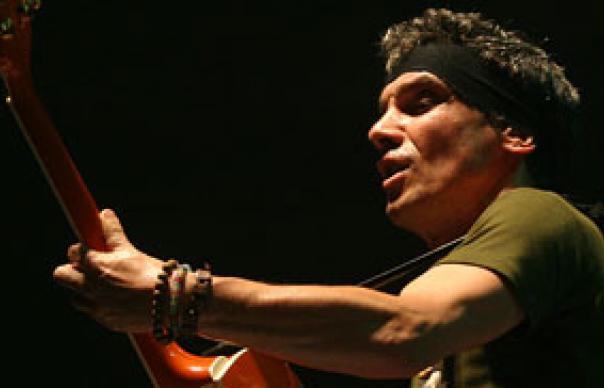 That album’s renegade global mix of rumba, reggae, rock, rai and rap, topped with the type of insurrectionary politics and memorable tunes seldom heard since Bob Marley, proved irresistible throughout the Spanish-speaking world. Britain, however, remained largely immune to the phenomenon, in part because Virgin initially declined even to release the album here.

The follow-up, 2001’s ‘Proxima Estacion Esperanza’, was in effect ‘Clandestino Two’ but since then Chao has been oddly reticent, releasing only a live album, the French side project Sibérie M’était Contée and producing the blind Malian duo Amadou & Mariam. Recorded at his home in Barcelona with additional mixing by Mario Caldato (Beastie Boys/Beck), now comes his first major statement in six years – and without wishing to push the Marley comparisons ‘Exodus’.
His familiar trademarks are all here – the Latin folk melodies, flamenco and other world rhythms, simulated radio patter, surreal samples and the street-protest sloganeering on tracks such as “Politic Kills”. But like ‘Exodus’, ‘La Radiolina’ reaches out beyond it’s core audience to a universal constituency, not so much a world music record as a global-rock mission statement.

It’s all articulated in a musical Esperanto. From the galloping rockabilly-blues of the opener “13 Dias” through the frenetic energy of “Panic Panic” and the driving rock beats of “Rainin In Paradize”, to the catchy, grown-up pop of “Bleeding Clown”. The latter sounds tailor-made for Robbie Williams, who covered Chao’s “Bongo Bong” with Lily Allen on his last album. Chao started out in Mano Negra wanting to be Joe Strummer. The two subsequently became friends and the Clash man ended up wanting to be Manu Chao. He would’ve loved ‘La Radiolina’: with its manifesto of globalista politics, maverick beats and gypsy soul, it’s what he was latterly striving for.