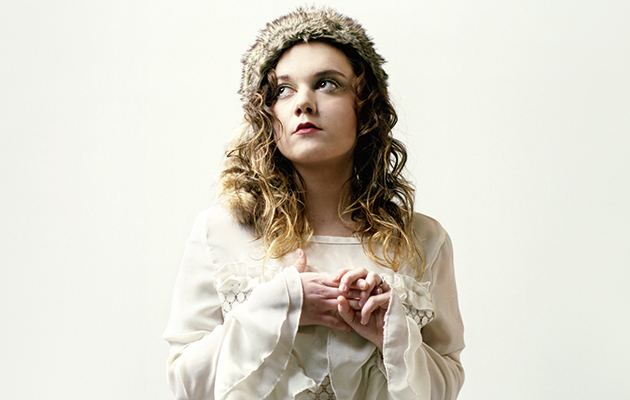 It’s a small moment, but a telling one: nearly two minutes into “More Than Ever”, a fraught song about love gone horrifically and perhaps therefore hilariously wrong, Lydia Loveless lets out a chuckle, a short, sharp exhalation of breath, before delivering the next line, “But if self-control is what you want, I’d have to break all of my fingers off.” It’s a wonderfully unscripted moment, nothing likely to appear in the lyrics sheet for her third album, Real, but that sly “huh” carries as much meaning as the actual words: that Loveless has seen love go bad before, that she is no stranger to a sexual desire that ignores reason and self-preservation, that she can find some humour in her failings, that she’d remove every last digit if that’s what it takes. Most crucially, that chuckle reveals that Loveless has become as ingenious a singer as she is a songwriter.

Few songwriters in any genre are chronicling the vagaries and vulgarities of commitment with as much wit as this Ohio native, and few singers are bending notes and breaking syllables with as much soulful self-abnegation. After recording her debut LP at 15, Loveless signed with venerable alt.country label Bloodshot for 2012’s Indestructible Machine and 2014’s Somewhere Else, and with each record has sharpened her language as well as her observations. Real is even smarter, even more precise in its insights and even more merciless in its hard truths. In other words, it’s her best yet.

Similarly, with each record, Loveless (now in her mid-twenties) and her road-tested backing band have been gradually and self-assuredly moving away from the slick production of her first album and the hard-knuckle alt.country of her second towards a kind of Midwestern rock sound: all rough edges, slurred delivery, industrial guitars, torn hose, smeared lipstick. This is an album where it’s always 2am on a bad night, where every song is set in an empty bedroom or a crowded club. The guitars chime and churn rather than twang, kicking up a kind of flyover-state jangle that’s sympathetic one minute, jeering the next, and producer Joe Viers underlines everything with a bed of austere synths.

This country-not-country palette allows Loveless to be just as adventurous musically as she is lyrically. “Heaven” builds off an earworm bassline that jabs at the listener, as though shadowboxing, while Loveless adds a compact and sharply barbed hook that’s as catchy as it is fatalistic: “Paradise is for the weak, man/No-one goes to heaven!” Later, she strips everything down to guitars and some industrial machinery on “Out On Love”, one of her best and most devastating performances.

That’s the remarkable irony of Loveless as a singer-songwriter: she never sounds quite as strong or quite as confident as she does when she’s at her weakest. She provokes fights with friends, takes back cheating lovers, falls for the wrong guy over and over again, and generally does all the things she knows she shouldn’t do. Real is a catalogue of bad decisions and questionable actions, yet she sounds most comfortable when she’s at loose ends, whether she’s peeping through an ex’s window on “European” or contemplating calling up a married man on “Desire”. Oddly enough, Loveless has explained that the album and its title were inspired by a newfound confidence in herself, an acceptance of her own and others’ faults. Happiness has softened a lot of songwriters, but she is wisely suspicious of contentment, as much for emotional as for creative reasons. So even a song like “Bilbao”, with its devotional chorus – “Marry me, there’s nowhere in the world I would rather be” – is shot through with melancholy and loss, a dread not of the end of happiness but the surrendering of self. Loveless knows you lose a little something of yourself to any lover, but she’s fighting to have it both ways and answering the world with a resounding chuckle.

Q+A
Lydia Loveless
As a vocalist, how do you get in the right headspace to convey the complex emotions in these songs?
I wish I could say I was capable of routines. In the past, I was too eager to get as much shit done in one day as possible, but now I realise if I want to sound my best, I need to sleep more and actually focus on my voice. Maybe this isn’t news to a lot of artists. Also, Throat Coat tea. And good-luck American flag bandanas.

You’ve been gradually moving away from alt.country…
I’d say it’s a natural progression. I go back and forth so constantly with what I like to play. It’s a mood thing. I was just in a very poppy headspace. Right now I’m a little sadder, so I’m writing more folk stuff lately. I want to be known as a songwriter, not a “honkytonk whiskey-guzzlin’ princess” or whatever.

What’s it like to live with such personal and dark songs and play them night after night? Is it exhausting or cathartic?
These songs are the only things that get me through, so I would say cathartic. Without them all I would have to look back on is the horrible emotions and behaviours from the time period in which I was writing them. I was in a dark, dark place, and I’m ready to come out of that phase and hold these songs up like, “Yeah! I lived! And I’m better now.”
INTERVIEW: STEPHEN DEUSNER