East LA’s finest return to their roots and deliver a landmark album... 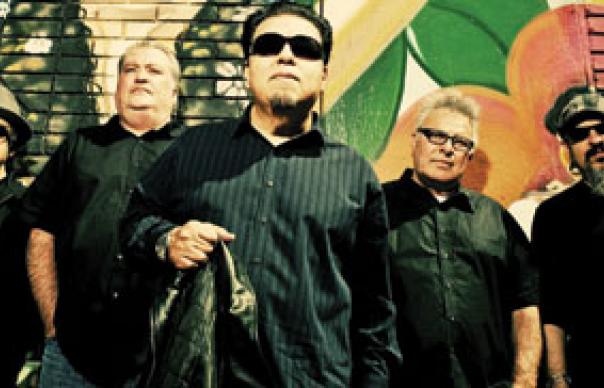 Los Lobos recorded a bunch of Mexican folk songs for their 1978 debut LP, titling the collection Just Another Band From East LA. During the ensuing third of a century, singer/guitarists David Hidalgo and Cesar Rosas, drummer/guitarist Louie Perez and bassist Conrad Lozano – joined in the early ’80s by Philadelphia-born sax player and producer Steve Berlin – have put the lie to that description, cementing their status as one of America’s most reliably adventurous bands.

This is a band who have traditionally marched to a beat that’s entirely their own: a seamless amalgam of rock’n’roll, blues, R’n’B, country and Tex-Mex, all topped with Hidalgo’s achingly soulful vocals. When they scored a big hit with the theme to the Ritchie Valens biopic La Bamba, the band followed it up with an album of traditional Mexican music. For this 14th album the band respond to new circumstances – as Steve Berlin puts it, “new label, strange times” – in a similarly powerful way. Los Lobos’ baseline is so high, when they surpass it, as they do here, their music is as good as it gets, period.

For Tin Can Trust, the band holed up in a funky studio in an East LA neighbourhood not far from where the four core bandmembers grew up, and built the album from scratch, having arrived without any completed songs or any particular course to pursue. Despite the lack of direction going in, the resulting LP is as sonically coherent and thematically unified as anything they’re done.

Reliably enthralling writers, Hidalgo and Perez have the ability to transport their band into the mystic, as they do here on “The Lady Of The Rose”, a magical-realist narrative about a visitation from the Virgin Mary. The metaphysical blues nocturne “Jupiter Or The Moon”, and the closing “27 Spanishes”, a fabulist take on the conquistadors’ invasion of what is now Mexico, perform similar high-quality work. The latter has an audacious kiss-off line: “Later they became muy friendly/and their blood was often mixed/Now they all hang out together/and play guitars for kicks”.

These are the album’s most atmospheric moments, along with the loping cityscape “On Main Street”. But the partners can also raise the temperature to Mojave levels, channeling a lifetime of desperation and defiance into the molten opener, “Burn It Down”, pushed along by the thick plunks of Lozano’s fingers on a stand-up bass. Susan Tedeschi’s harmony vocal echoes Hidalgo’s innate soulfulness – the track concludes with his guitar pyrotechnics. The title track, meanwhile, is built on a Perez lyric of resilience in the face of a world seemingly without hope, and the band gets to its pumping heart.

Rosas contributed a pair of originals en Español, and collaborated with Grateful Dead lyricist Robert Hunter on the minor-key lament “All My Bridges Burning”. Interestingly, the language of this seasoned writer, though thematically on-point, lacks both the colour and the lived-in credibility of Perez’s lyrics – but it’s saved by yet another breathtaking Hidalgo solo. Indeed, whatever else it is, Tin Can Trust is a kick-ass guitar record showcasing Hidalgo’s ability to fuse his virtuosity with the emotion at the core of each song.

Now in their mid-fifties, Los Lobos aren’t remotely close to losing their edge, in stark contrast to many of their tapped-out fellow veterans. Tin Can Trust is a masterful album from an undeniably great American band, at the peak of its considerable powers.
Bud Scoppa

Q+A Steve Berlin
What is the character of this record?
We’ve never really had any concept, with the exception of Pistola… [1988] and The Ride [2004], where we paid tribute to the artists who inspired us and played with them. In a weird way, this record is paying tribute to the music we grew up with. It was evocative to be back in East LA after 30 years. We weren’t trying to go retro, but it inevitably fell that way by virtue of where we were and because the songs were put together on the spot.

This is also a killer guitar album that shows what an underrated player Hidalgo is.
It’s not like we set out to change that mindset, but as the record unfolded, we realised he’d played some really tasty solos. On “Tin Can Trust”, as Dave was doing the vocal, he had his guitar in his hands, like a security blanket, and on one of those takes he let that solo rip. There were no mics in front of the guitar and the amp was across the room, so the sound of that solo is through his vocal mic. But it doesn’t get any better than that, so we had to use it.
How does Tin Can Trust stack up against the previous 13 LPs?
There was a lot more uncertainty going into this record – new label, strange times – and the fact that we came out with a really good record that really sounds like us, that’s what I’ll be taking away from this one. INTERVIEW: BUD SCOPPA