Hyped Texan's blast for the past hits the sweet spot 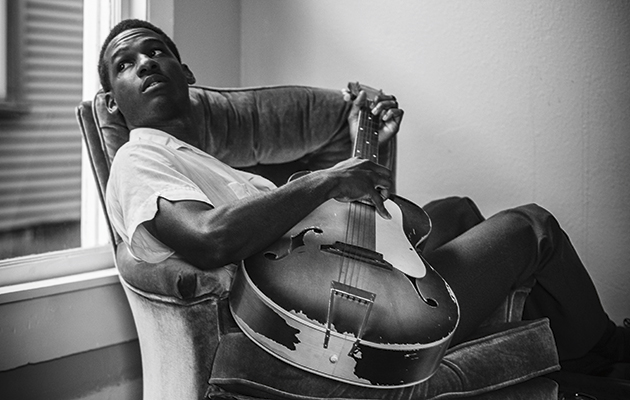 “Retro soul” is arguably a clunky and inadequate tag to hang on artists as diverse as Amy Winehouse, D’Angelo and Sam Smith, but there’s no denying the depth of that particular mine, or its profitability. So much so, that it would take little effort to be cynical about new kid on the block Leon Bridges.

A 25-year-old Texan singer/songwriter and former dance student, he arrives with a sweetly anecdotal back story. In 2013, he was washing dishes in a Fort Worth grill by day and playing open-mic events at night; in October of 2014, three demos he posted on SoundCloud generated a loud online buzz with their unforced and uncannily accurate recreation of late-’50s/early-’60s soul; two months later, he was signed to the same record company as Adele. Coupled to this narrative is Bridges’ on-point image – an Instagram gallery of black-and-white photos depicts him in Sta-Prest slacks, single-button jacket and fedora, sat at a diner counter, in church, on a stoop… really, it’s hard to imagine how this retro-soul package could be more complete.

And yet, any concerns about contrivance evaporate with the tenderly smoked, over-easy opening lines of his debut album. The title track – Bridges’ online calling card, re-recorded as his first single – instantly cements the Sam Cooke comparisons and he admits to the impact “A Change Is Gonna Come” had on him the first time he heard it, but it’s precisely the props given to that period that make Coming Home such a strong and interesting record. Interesting, in that it fixes on the R&B/gospel hybrid that is southern soul – not the usual choice of young revivalists – and it conspicuously lacks a “contemporary pop edge”, despite the younger Bridges’ fondness for Ginuwine and Usher. Strong, because retro-soul records are often painted with such broad interpretive strokes that they struggle to transcend pastiche. Simple Coming Home may be, but it’s in no way simplistic.

Produced by fellow Texans Joshua Block and Austin Jenkins – drummer and guitarist respectively of White Denim – and recorded to tape in an empty warehouse, using Block’s armoury of vintage gear, it sounds like a love-in watched over by the spirits of Cooke, Eddy Giles and Otis’s Redding and Clay. Block and Jenkins also play on the record, along with musicians drawn from local bands and backing singers chosen by Bridges. Unvarnished and direct is how they deliver it, whether via the doo-wop swing of “Brown Skin Girl”, “Pull Away”, a smoochy ballad with a see-sawing rhythm or the sax-blasted “Smooth Sailin’”, which conjures teens jiving on talc-dusted boards. “Lisa Sawyer” and “Twistin’ & Groovin’” are at opposite ends of the mood spectrum; the former (one of those early online demos) is a touching biographical tribute to Bridges’ mother, in which his caramelised croon grows so soft the “s” in “New Orleans” falls away; the latter – where a buzzy guitar riff slices through swinging R&B/Cajun-blues – is pure soda-shop jukebox.

There’s so much sweetness and light here, it’s almost a shock to hear Bridges hint at darkness in his past and refer directly to his faith, as he does on “Shine”, an echo of James Carr’s “The Dark End Of The Street”. Over Hammond organ and a murmurous choir, he pleads, “Lord, don’t remember my sins from my youth… use me as your vessel; I want to shine like the burning candle in the room.” But it’s on gospel closer “River” that he really pins his heart to his sleeve. Strumming the simplest of chords on an acoustic – Bridges’ only instrumental contribution to the record – and with tambourine and backing vocals the only other accompaniment, he sings openly about finding his belief again after “10,000 miles gone”. It’s both heartfelt and humble.

Lurking in the wings of all such records is the thorny issue of “authenticity” – more often raised in a pissing contest over appropriation rights than expressing real concerns about commitment and respect. But there’s both in spades on Coming Home, a throwback album also blessed with modesty. It sounds oddly refreshing, five decades on.

Q&A
Leon Bridges
Why the move away from modern R&B-pop into vintage soul?
Classic soul music was just very refreshing to me over the newer R&B. The song’s themes back then were not vice-oriented, but left very clean and simple.

How did you arrive at the LP’s mix of soul, doo wop, gospel and ’50s rock ’n’ roll?
I’m a great fan of all those sounds, so I really wanted to incorporate them into this record. The overall sound is the result of my band’s interpretation of the songs, so it constantly evolved as we collaborated, with all sorts of different influences.

What did the White Denim guys bring to the record?
Austin and Josh can play any type of music that they wish to. They are hard-hittin’ musicians that brought a real subtlety to this record. It’s an arrangement that caters to the singer – which is perfect for me.

Your vocals are strong and assured, but you never belt it out. Why not?
I’m not naturally a “belt it out” kind of singer; I’m just not vocally capable of doing it. So, I lean on making melodies and interesting phrasing. Low-key, smooth “revival” music is not a popular thing right now, so subtlety is refreshing for people.

“River” is a deep track to exit on; is that fair to say that it’s about faith?
It’s interesting; I’ve noticed a lot of the soul singers of the ’50’s and ’60’s used river metaphors. The river in my song is a metaphor for being born again.
INTERVIEW: SHARON O’CONNELL