Fleeing his failing label and the Vietnam War, the country-pop cult hero makes an unlikely masterwork in the land of the midnight sun 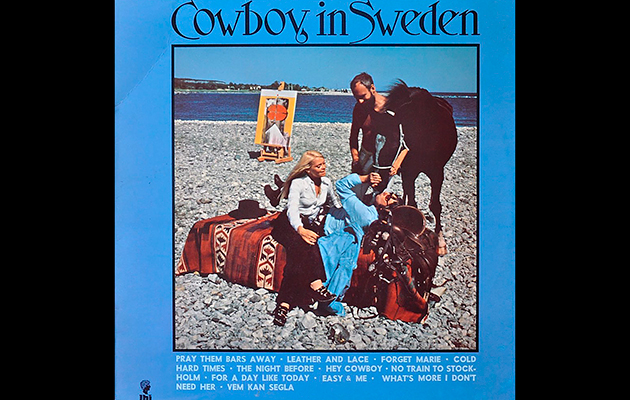 In several scenes in Cowboy In Sweden – a TV special that undoubtedly confounded many Scandinavians when it first aired in 1970 – Lee Hazlewood drops the horse-riding, mystic-cowpoke-Casanova schtick that he uses for most of his screentime in favour of a different guise. Instead, he’s the wry American newcomer who marvels at the traits and traditions that best define Sweden. And though he’s clearly most enthused about the beautiful women he’s forever ogling, he’s just as keen on the midsommar celebrations and “the genius Ingmar Bergman”.

While standing on a Stockholm street, Hazlewood praises another hallmark of Swedishness. “Y’know,” drawls the denim-clad Oklahoman to the viewers at home, “if you make a good movie, chances are at the end of the year you’ll win an Oscar. And if you discover something that’s kind of important, well, chances are again they’ll give you an Alfred… an Alfred Nobel, sometimes known as the Nobel Prize. Now, I’ve been doing a little research….” He pauses to blows dust off the book he’s holding. “…And I found out one thing: there’s no category for song. And that’s really too bad cuz I think this next song ought to get me an Alfred.”

Suffice to say, the song in question – “No Train To Stockholm”, an exquisitely winsome country-pop ballad specially crafted to further Hazlewood’s popularity in his newly adopted home – did not win a Nobel Prize. And if Hazlewood was still around today when the committee members finally gave one to a songwriter nearly 50 years after he made his bid, he’d have been none too happy to see his Alfred go to another American. (Nor would there have been any doubts about Lee showing up at the ceremony to accept his prize money.)

At least the old salt could take pleasure in knowing Cowboy In Sweden has so many admirers far from Uppsala. Light In The Attic’s Lee Hazlewood Archival Series first made the TV special and its soundtrack available as part of 2013’s Grammy-nominated There’s A Dream I’ve Been Saving: Lee Hazlewood Industries, its massive history of the largely hit-less record company that Hazlewood launched at the height of his success in 1966 but was hitting the ditch by the time he emigrated to Sweden. The move was precipitated for many reasons, including Hazlewood’s anxieties about the escalating war in Vietnam and his teenage son nearing draft age. Yet the land of the midnight sun clearly represented a fresh start to Hazlewood in professional and personal terms, the collapse of LHI and his European travels coinciding with his breakup with longtime muse and business partner Suzi Jane Hokom. Such was the extent of their estrangement, Hokom’s one scene in Cowboy In Sweden – performing “For A Day Like Today”, LHI’s final 45 – was filmed in the fjord-less location of San Bernardino, California.

Presented here in a single CD/LP edition with alternate versions of two tracks, Cowboy In Sweden was primarily intended for the Swedish market, a strategy flagged by the inclusion of songs like “Vem Kan Segla (I Can Sail Without The Wind)”, a half-English, a half-Swedish duet with Nina Lizell, his comely blonde co-star. Adding to the air of hastily-assembled-cash-in was the presence of several songs that had already appeared on recent Hazlewood albums, including “Forget Marie”, a forlorn and gorgeous number that he’d recorded in Paris for 1968’s Love & Other Crimes.

Suspicions may be raised by the disc’s provenance and the many ridiculous moments in the special, which also included guest performers such as the George Baker Selection, whose frontman gamely mouths the lyrics to the Dutch band’s hit “Little Green Bag” in a restaurant while apparently waiting for lunch (you can savour it all on the DVD in the deluxe edition). Yet Cowboy In Sweden is frequently astonishing as a testament to Hazlewood’s continued prowess as a performer, writer and producer, despite the atmosphere of disarray during LHI’s death throes.

An idiosyncratic take on a prison blues (refashioned as a weirdly funky jam in an alternate version), “Pray Them Bars Away” vividly demonstrates the wonders Hazlewood could achieve by combining his bullfrog baritone with his baroque, psych-folk spin on the orchestral-country sound that had been pioneered by Owen Bradley in the 1950s. A romantic melodrama repackaged as pocket symphony, “The Night Before” sees Hazlewood take on the guise of regret-filled lover, surrounded by “empty wine bottles” that “stand accusing on the floor”. “What’s More I Don’t Need Her” was recorded during sessions with Shel Talmy and a team of English sessioneers that included Nicky Hopkins. A bewitching piece of silver-plated spite augmented with harpsichord, horns and a backing chorus of cooing females, it anticipates Hazlewood’s Hokom-inspired lamentations on Requiem For An Almost Lady, the 1971 fan favourite that was also released only in Sweden.

Even the most cravenly Scandinavian songs are richer than they have any right to be. One of the three songs with Lizell, “Hey Cowboy” has much goofy charm thanks to Hazlewood’s laconic hipster-on-a-horse routine, which works much better without the cringe-worthy visuals. Sung from the perspective of an American draftee who has little chance of escaping the fate that Hazlewood feared for his son, “No Train For Stockholm” boasts a poignancy that may be surprising given Cowboy In Sweden’s kitschier trappings. Whether the song merited an Alfred is another matter, but like the rest of the music here, it should’ve earned him a lifetime’s supply of gravlax.