One lush masterpiece, and its inscrutable follow-up, reissued with extras... 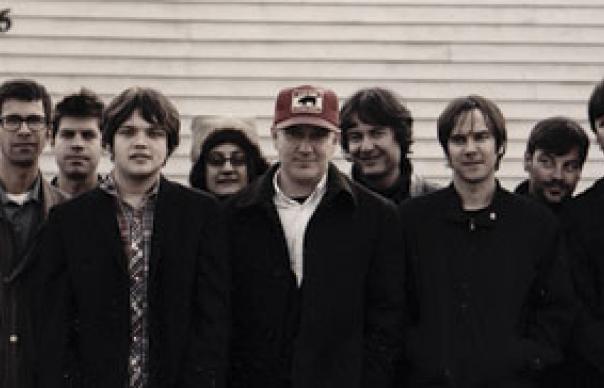 For most Lambchop fans, Nixon – Uncut’s Album Of The Year in 2000 – remains a singular pinnacle, the band’s masterpiece, a high-water mark of 21st century Americana. On release, of course, it raised eyebrows, surprised a lot of people, the bulk of whom hadn’t properly been listening to what Lambchop had done previously and were therefore unprepared for the record’s extraordinarily rich and intoxicating mix of styles, which elegantly embraced burnished Southern soul, psychedelia, dark country noir, gospel hallelujahs, orchestral pop, feedback psychosis, far-out funky strutting, languid introspection and engulfing ballads.

To the extent it was the place their career had been leading them towards, you can hear aspects of it taking shape on the four full-length albums and one EP that preceded it – on, for instance, the call-and-response soul of “Betweemus” and the lysergic shimmer of “Soaky In The Pooper” from their 1994 debut double-album, I Hope You’re Sitting Down/Jack’s Tulips; the increasingly gnomic deadpan turns of Kurt Wagner’s songwriting on the 1996 “Hank” EP and that same year’s How I Quit Smoking; the delicate murmurings of “My Face Your Ass” and horn-fuelled “Your Fucking Sunny Day” from 1997’s Thriller, whose title track was an ambient instrumental, and more immediately the covers of Curtis Mayfield’s “Give Me Your Love (Love Song)” and Frederick Knight’s “I’ve Been Lonely For So Long” on 1998’s What Another Man Spills.

Re-released a decade on as part of the City Slang label’s 20th anniversary, Nixon, by virtue of sounding in the first place like it had come from somewhere beyond time, hasn’t dated at all. What was ravishing in every detail 10 years ago is ravishing still. How quickly on re-acquaintance you become immersed again in, for instance, the quizzical narcoleptic drift of songs like “The Old Gold Shoe”, “Grumpus” and “Nashville Parent”, which find Wagner looking at the world in quiet wonder and wondering in turn at its inconsistencies and variables, the fragile perishability and impermanence of things particularly troubling to him. Hence the celebration in his songs – here and elsewhere – of the so-called ordinary, everyday rituals and routines, the stippled repetition of familiar household chores and the talismanic virtues of the morning hug, the barking dog, a dreaming bird, the creak of familiar floorboards, the unfolding universe.

The band’s musical palette, meanwhile, would never again seem so lavish. The cunnilingual swirl of strings and brass, in which instruments swim and mingle in blurry sonic alchemy, on tracks like “What Else Could It Be?”, “You Masculine You”, “The Distance From Her To There” and “The Book I Haven’t Read”, is wholly magical. The record’s occasionally spectral cast is nimbly underlined by weird sonic rumblings, guitar static and myriad spooky cracklings, which are especially unnerving on the nocturnal distress of the two songs that end the album – a re-working of their own “The Petrified Florist” and traditional lament “The Butcher Boy”. These are by some distance the darkest moments in Lambchop’s music – “The Butcher Boy” is frankly terrifying – but Nixon will forever be defined for many by the robust holler of “Up With People”, which starts with not much more than a strummed guitar and ends with handclaps, horns and gospel choir.

This ‘deluxe edition’ comes with a good-to-have DVD of Lambchop’s May 2000 concert at the Queen Elizabeth Hall, which like the album it closely followed, finds them at a peak, from which they began a slow descent with their next record. Where Nixon was vast, in many respects its follow-up, the somewhat problematic Is A Woman, found Wagner and Lambchop more inscrutably withdrawn than previously. The soaring strings and horns were here replaced as musical focal points by Tony Crow’s limpid jazz piano and the sometimes fuzzy heavy gauge clunk of Kurt’s vintage Gibson L-3 guitar, perhaps the group’s most consistent musical signature.

So consistent is the album’s mood and tempo, you may at times think you’re listening to a single song, something evolving at length, in its own time, slowly, with great deliberation, an unhurried yawning followed by a discreet awakening, none of the 11 tracks apparently in a hurry to get anywhere, a somnambulant progression. Even more often than Nixon, and most conspicuously on something like the eight-minute “My Blue Wave” or the sublime “The New Cobweb Summer”, Kurt’s songs were poised between whimsical reflection and grim tragedy. It was the point for many, however, where inscrutability gave way to a kind of obduracy, and they started drifting away, preferring Nixon’s opulence to the sparse sound essayed here and carried over onto the looming landmass of Aw Cmon and No You Cmon, two discs, simultaneously released in 2004, but not, we were given to understand, a double album.

Is A Woman also comes with a bonus disc, recommended, that gives home to miscellaneous odds and ends, outstanding among them the exquisite “The Gettysburg Address” (a long-time personal favourite), the beautifully droll “Kurt Wagner’s Heart Attack” and “We Shall Not Be Overwhelmed”, with its muted “Sister Ray” backbeat. Also here are Lambchop’s cover of The Rolling Stones’ “Backstreet Girl”, originally recorded for an Uncut CD, and their simply amazing version of The Sisters Of Mercy’s “This Corrosion”.
Allan Jones