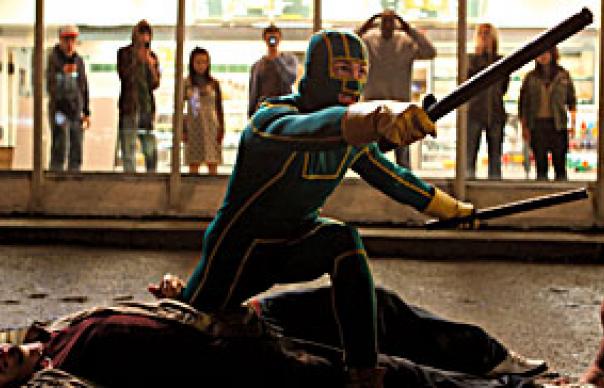 In one of the more predictable moments of pre-release publicity for Kick-Ass, The Daily Mail declared itself morally perturbed by the way the film blurs the line between adult and children’s entertainment: a charge you could make against Wallace & Gromit, or James Bond, or virtually any mainstream Hollywood movie.

But the tenor of this tabloid outrage was interesting. In content, it wasn’t far from the punk-era headline that greeted the Sex Pistols: “Must We Fling This Filth At Our Pop Kids?”

But here’s the thing: Kick-Ass is shocking. The opening scene, for example, offers a brisk slap to audience expectations. It’s a short scene, played for laughs, in which an admiring crowd watches a superhero launch himself from the top of a skyscraper. He doesn’t soar so much as plunge. Turns out, he’s a mental patient with decorative red wings and an urgent appointment with the sidewalk.

Then there’s a scene where Nicolas Cage, playing gimpy gun-nut Damon Macready, uses his daughter, Mindy (Chloe Moretz) for target practice: “So you won’t be scared when some junkie asshole pulls a Glock.”

So, Kick-Ass is no ordinary superhero movie. It is a film that is happy to mock audience expectations of a comic book adaptation, while also being faithful to the traditions of the genre. In this, the film is true to the spirit of Mark Millar’s original comic series (issue 2 of which featured a coverline declaring, “Sickening violence: just the way you like it!”).

Following the example of comic book authors like Frank Miller and Grant Morrison – whose various deconstructions of Batman helped set the tone for the best of the subsequent movie versions – Millar’s approach is both studied and knowing. He is fluent in the grammar of superheroes, and sincere enough in his admiration of the genre. Yet he brings a dark humour and contemporary resonance to much of his work. In Kick-Ass he poses a question so simple, you have to wonder why no-one thought of it before: what would happen if an ordinary person in the “real world” decided to become a superhero?

That someone is Dave Lizewski (Aaron Johnson, last seen as John Lennon in Nowhere Boy), a comic-loving geek, who lets his imagination run wild. After enduring an adolescence in which he is bullied and never gets the girl, he takes emergency measures, ordering a rather unprepossessing superhero outfit from the internet. He trains himself for a life of crime fighting by bunny-hopping in alleyways and running over rooftops.

But, as the voiceover notes: “Like every serial killer already knew, eventually fantasising doesn’t do it anymore.” So he tries his hand at crime fighting, interrupting a pair of hoods breaking into a car. Strangely enough, the thugs are not deterred by the attentions of a weedy teenager dressed in a body stocking, and he is promptly thumped. Actually, he is more than thumped, but what happens next is one of those abrupt shocks you might wish to experience for yourself. Suffice to say he doesn’t die, and on emerging from hospital, medical intervention has gifted him a hint ?of a superpower: his pain threshold is heightened. On the other hand, his hasty attempts to cover up the fact that he was dressed in a superhero costume backfire when the hot girl at school assumes he is gay. After all, why else would he have been found naked and beaten in the street?

In a thoroughly modern twist, Lizewksi’s crime-fighting efforts turn the “wetsuit crusader” into an internet phenomenon. This takes him into the orbit of Macready and Mindy, who are pursuing a similar path with greater success. Macready (in bad Bat-mask) and Mindy (in purple wig) are a post-modern, post-watershed riff on the Batman and Robin double act, calling themselves Big Daddy and Hit-Girl. Cage’s Big Daddy is an ex-cop spurred into vigilantism by his mistreatment at the hands of crime boss Frank D’Amico (Mark Strong) and his geeky son Chris who longs to enter the family business. (Chris, too, will go to the masked ball, as supernerd Red Mist.)

So, what you have is something close to Mexican wrestling, where masked characters do battle in ways that are predictable, but frequently entertaining. The tone is faithful to the skewed universe of the comic book; only rarely does the black humour threaten to puncture the mood. The performances are similarly sympathetic. Cage is at his ridiculous best, and delivers a performance so deadpan that you forget that it bears no relation to the description of his character: far from being a hard-boiled cop, bent on revenge, he plays Macready as a polite psychopath. But it’s to Layer Cake director Matthew Vaughn’s credit that Cage’s tendency to moon is kept in check. Johnson is similarly controlled, resisting the urge to be anything more than wide-eyed and weak-kneed, while propelling the action with endless self-deprecation. But it’s Moretz, as Hit-Girl, who steals every scene. She has all the best lines, and some of them involve comedic swearing, pop kids.

The choreography is gloriously intense. The climax, with superheroes fencing inside a hall of mirrors – and, in an adjacent room, a scene involving a bazooka, a jetpack and a sudden burst of Elvis singing “American Trilogy” – makes Tarantino look like a wallflower. The use of music is inspired throughout: there is a bit of Morricone, a blast of the Banana Splits. It’s top quality sherbet.

What’s not to like? Well, I could have done without seeing Hit-Girl get kicked in the face by a grown man. But that makes me an adult, flinching at child’s play.
Alastair McKay