The Louis Vuitton don ditches the rapping and the soul and is left with… well, not much, actually 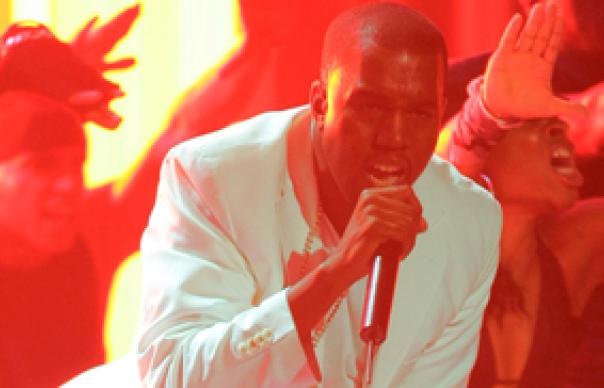 Even if you factor in the hyperinflated claims of the average American rapper, Kanye West’s elephantine ego really is something else. This is a man who has posed as a tortured Christ and as a winged angel, who has described himself as “the closest that hip hop is getting to God”, who has said that, were the Bible written in this day and age, he would be a key figure in it.

Unfortunately for his detractors, Kanye’s first two albums seemed to justify such braggadocio. “The College Dropout” and “Late Registration” were almost faultless works, filled with killer pop hooks, screeds of witty rhymes and more musical ideas that most artists get through in an entire career. He also sought links with unlikely sources – he expressed his love of Portishead, befriended Chris Martin, roped in AOR producer Jon Brion for his second album and even got Bonnie “Prince” Billy to appear in one of his videos.

Ego, notwithstanding, collaborators of a musical kind have been very important to West. As well as his work with Brion, his first two albums were written in conjunction with pianist/songwriter John Legend. Since that collaboration has lapsed, however (West, said Legend is “someone with a great sense of musical vision. What he occasionally needs is someone who can execute some of the more musical aspects that are inside his head.”), West has struggled.

His third album “Graduation” – his first without Legend – saw him running out of ideas and becoming increasingly reliant on old samples, to the point where a track like “Stronger” featured Kanye merely talking over the top of a six-year-old Daft Punk song.

So a change was needed – and, to his credit, “808s And Heartbreak” is Kanye’s step into the unknown. It sees him making the brave decision to use no samples, with every track instead based around a programmed rhythm from a Roland TR-808 drumbox, backed with minimal, lo-fi analog synths. And Kanye – a literate and compelling rapper – has elected to not rap at all here. Instead he sings using AutoTune, the digital recording corrective which Cher’s “Believe” turned into a now-ubiquitous special effect.

The opening track “Welcome To Heartbreak”, sets the tone, all strident synths, pounding tom-toms and heartbroken Dalek vocals. The single “Love Lockdown” continues in this vein, in which a robot-voiced Kanye recites his bleak lyrics as a minimal sub-bass taps out a Morse-code pulse, backed only by occasional splashes of plinky-plonky piano and, on the chorus, a burst of Adam And The Ants-style drum stomping. “Robocop” mixes a similar bass line with gunshots and police sirens (its somewhat insubstantial backing track is rumoured to be being fleshed out by Herbie Hancock before release).

One certainly can’t accuse Kanye of slacking – this is his fourth album in as many years (fifth if you include his live orchestral album “Late Orchestration”), and is to be followed by yet another studio release in mid 2009. The only problem with “808s & Heartbreak” is that, on the evidence of a single playback in the Universal offices (one that left off three incomplete tracks) is that most of the songs just aren’t good enough, something rather shocking when you consider how full-to-bursting his earlier albums have been with melodic ideas.

Her Majesty’s Music Press weren’t given any album credits, but apparently the bookish Oxford graduate Ben Hudson – from Mr Hudson And The Library – serves as Kanye’s John Legend here, and his sonic fingerprints seem to be all over “Paranoid” (also leaked on the internet as “Anyway”). It’s the album’s best track by far, where a bleepy, pulsating bassline is topped by Stevie Wonder-ish major and minor-sevenths and a compelling vocal. Also worth checking out is “Street Lights”, a minor-key ballad where a Cocteau Twins guitar shimmers and throbs under a 6/8 beat.

Otherwise, the lo-fi production makes everything sound like an unfinished demo, the songs are largely forgettable and the AutoTune’d vocals become a little tedious. From a lesser talent like, say, Usher or Akon, “808s & Heartbreak” might be a forgiveable oddity; from Kanye it’s a major disappointment. Even God, it seems, needs a few talented friends to help him out sometimes.