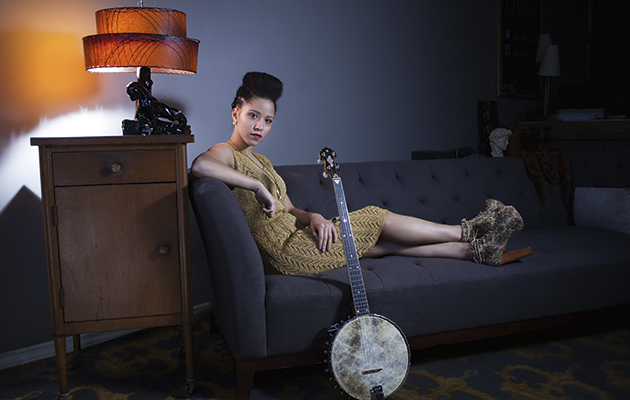 In cultural terms, Appalachia is often used to signify music from a specific area of the American South, namely the slanted trail through the Virginias, Kentucky and North Carolina. Less well acknowledged is the fact that the Appalachian Mountains extend north into the eastern lip of Canada, an area that includes Newfoundland, Nova Scotia and Quebec. This geological belt has doubled as a musical one down the years, an exchange route that’s allowed folk ballads and traditional songs to pass back and forth across territorial lines.

The most striking new addition to this rich heritage is 23-year-old Kaia Kater. Born in Quebec to a Canadian mother and Caribbean father, Kater grew up listening to a broad range of styles – American rap, hip-hop, folk, soul – before devoting herself to the study of Appalachian music at college in West Virginia. Roots music runs particularly deep in the family, her fascination with old-time songs partly fostered by her mother’s directorship of Folk Music Canada, a job which has seen her captain the Ottawa and Winnipeg folk festivals.

Kater’s love of idiomatic rural music was neatly displayed on last year’s Sorrow Bound, a debut that blended new and traditional elements into an artfully understated whole. Its promise has now been fulfilled, in emphatic fashion, by Nine Pin, an extraordinary piece of work that posits Kater as a major new voice in folk-roots music. It’s a record that’s near-perfectly weighted between her rich, sorrowful tenor, clawhammer banjo-playing and a judicious use of brass and harmonies. And one made all the more remarkable considering that it was recorded in a single day during a winter break from college.

On one level, Kater belongs to the same lineage as people like Elizabeth Cotten, Alice Gerrard and Jean Ritchie, artists who expanded the province of women in the male-dominated environs of blues, folk and country. But she’s a modernist in the style of Gillian Welch or Rhiannon Giddens too, using traditional forms as infinitely malleable source material from which to shape something vivid and original. Her low gospel tones and fearless approach also align her to Nina Simone, a key influence both creatively and thematically.

This is most evident on the majestic “Rising Down”, a strident commentary on Black Lives Matter and the ongoing struggle for racial equality. “I am meat for the taking, in this town/But in my home, in my home/There are kings and queens and blessings”, Kater sings over a bony banjo line. The discreet swell of a trumpet, courtesy of Caleb Hamilton (a salient presence throughout), serves to underline the message of solidarity: “Your gun, your gun/Is a symbol of my lynching/But I won’t run, I won’t run/I will stand with my people, as one”. In its own quiet way, the song is a powerful corollary to Simone’s “Mississippi Goddam”.

Kater is a diarist of the lost and forsaken. “Paradise Fell”, her voice and banjo softly shaded with brass, backing harmonies and the electric guitar of co-producer Chris Bartos, addresses what it means to be a lonely soul in a new city, conceived as a belated companion to John Hartford’s mid-’70s gem, “In Tall Buildings”. The same theme informs “Harlem’s Little Blackbird”, a song made all the more hypnotic by being entirely centred around Kater’s voice and the foot percussion of Katharine Manor. It is also, surely, a tribute of sorts to 1920s Broadway sensation Florence Mills, the black starlet and passionate campaigner for equality, whose signature tune was “I’m A Little Blackbird Looking For A Bluebird”.

The caressive timbre of Kater’s vocals are offset by the sparsity of these arrangements. It’s a persuasively disquieting trade-off that feeds into the subject matter of the songs. She isn’t averse to a romantic ballad, for instance, but they often detail the kind of love that strays into dark and dangerous obsession. The beguiling “Saint Elizabeth”, a gothic tale about a sinful rogue infatuated with an angelic woman, never suggests a happy ending. “Can’t you hear me calling from beneath?” she sings, stalked by the muffled harmony of Joey Landreth. “With blackened frozen feet/White roses all around/And covered on the ground”. Like most everything on Nine Pin, it’s a strangely seductive proposal.

Q&A
KAIA KATER
Why does Appalachian music appeal to you so much?
I’ve been fascinated by narrative stories for a long time, especially ones that deal with violence or apocalyptic notions. The dichotomy of describing ugly or terrifying events with poetic language is amazing to me. There’s a stark, gothic element to a lot of Appalachian ballads that’s truly incredible. I studied Appalachian music and dance in West Virginia for four years, and was consistently fascinated by old baptist songs, or songs about labour and death, or murder ballads. There’s a depth to the music that seems to be so easily and quickly overlooked.

“Rising Down” is a key song here…
It was specifically written to reflect what I felt as a person of colour in America. I wanted to make a statement about Black Lives Matter and the horrors and injustices that black people face every day. Racism is not only a state of mind, but a base system through which America operates. It’s the prison-industry complex, forced ghettoisation, the repealing of the Voting Rights Act, the segregated school systems, the unchecked police brutality.

What were the advantages of recording the album in a single day?
My producer Chris Bartos came up with the idea to get a really tight band together, get a bunch of rehearsals in and do live takes. It was challenging, but I think it forced us to make some very good decisions about the sound we wanted and the aesthetic of the record. We were in and out of that studio in eight hours.
INTERVIEW: ROB HUGHES