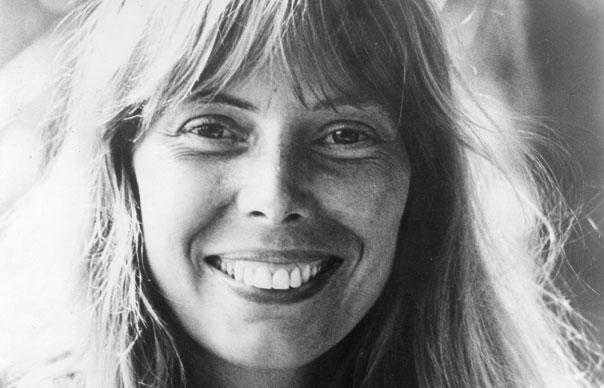 Joni Mitchell may be the most influential female artist in music history. While there have undoubtedly been more impressive singers, from Billie Holiday to Aretha Franklin to Dusty Springfield, prior to Mitchell’s emergence female performers were largely restricted to interpretive roles. Even the formidably talented Carole King had to wait until the ’70s for significant success as a singer-songwriter with Tapestry.

But Mitchell’s wider influence is undeniable, with artists far removed from her initial folk-music scene acknowledging her impact – Prince, famously, is a huge fan, and Madonna has admitted that “of all the women I’ve heard, she had the most profound effect on me from a lyrical point of view”. Not to mention, one imagines, Mitchell’s presentation of herself as a sexually self-determining woman at a time when submissive acquiescence was the dominant mode afforded newly “liberated” women; nor her capacity to negotiate some of the most complex and unvarnished emotional analyses ever set to music. Joni Mitchell was a true emancipator, a suffragette of sensuality blessed with a heightened poetic sensibility.

There is no better evocation of the dawn of a new, more questing consciousness than Joni’s early albums: the very album title Ladies Of The Canyon is redolent of flaxen-haired damsels in Angeleno hippie paradise. Mitchell had been discovered by David Crosby, who became the first of her Laurel Canyon lovers. As producer of her debut album Songs To A Seagull, Crosby’s main aim was to capture her talent as clearly as possible, unencumbered by overweening arrangements. “I didn’t do a very good job producing it,” Crosby once told me modestly, “but she did make an astounding record.”

The opening track “I Came To The City” deals with her early marriage, as if opening the album with a line drawn under her previous life. As such, it presages the strain of confessional honesty that runs throughout her work. Couched in imagery of pirates and seabirds, gems, flowers and fabrics, the rest of the album expresses her driving need for freedom, especially from the anchoring restraints of would-be suitors keen to pin her down. Heard retrospectively, the cold detail of the songs, and the austere purity of her voice, speak volumes about her clear-eyed ambition.

Studded with the early classics “Chelsea Morning” and “Both Sides Now”, Clouds is suffused with romantic uncertainty, hope and betrayal, like a ledger of the emotional accounting of the free-love era, profit and loss measured not just in love, but in the restraints and expectations love places upon us: the older woman “left to winter here” in “The Gallery” and the hesitant steps into new territory taken in “Tin Angel” and “I Don’t Know Where I Stand”. Ladies Of The Canyon added “Big Yellow Taxi“, “Woodstock” and “The Circle Game” to her burgeoning canon of classics, while “Willy” – lover Graham Nash’s nickname – became one of the earliest examples of the new mode of autobiographical revelation that turned Laurel Canyon scenesters’ songs into diaristic soap operas. But Blue was the landmark album, the apotheosis of Joni’s early style in which her lyrical strategies, melodies and vocal approaches were handled with a compelling confidence, and sequenced with an intelligent regard for what might be called the album’s emotional topography. Even today, there is no better evocation of the light-hearted joy of romance than “Carey”, with its see-sawing melody, and a delivery that slips so easily between affectionate yearning and bubbly excitement.

The same themes sustained through For The Roses in the fretful self-absorption of “Woman Of Heart And Mind” and “Lesson In Survival”, while both “You Turn Me On I’m A Radio” and “Blonde In The Bleachers” dealt head-on with the difficulties of sustaining relationships between musicians. But it was Tom Scott’s reeds that offered the clearest indicator of how Mitchell’s music would develop through the ’70s. The fuller arrangements of Court And Spark, with their jazz-inflected horns, have the effect of freeing up the songs: the material is just as romantically themed as before, just as anxious about appearances and social graces, but the general mood is lighter and less insular: the backing vocals, flute and Larry Carlton’s guitar give a mousse-light soul mood to a song like “Help Me”, while the jazz-pop texture of “Car On A Hill” offers an early blueprint of the sophisticated sound for which Steely Dan were searching at the time.

With Carlton, vibraphonist Victor Feldman and the Dan’s Jeff ‘Skunk’ Baxter involved, that sound came even closer on The Hissing Of Summer Lawns, perhaps Mitchell’s greatest accomplishment. The arrangements this time incorporated bass flute, flugelhorn, and miasmic electric piano, with “The Jungle Line” offered the most dynamic expression of the album’s overall theme tracking the thin veneer, between the primitive and the sophisticated. The album’s protagonists live in gated communities like prisons (“He gave her a room full of Chippendale that nobody sits in”), disguise themselves in the “stolen clothes” of long-gone movie icons, and engage in the courtly rounds of “The Boho Dance”, pointedly contrasted with the reminiscence of a furtive but free youthhood of romance and rock’n’roll in “In France They Kiss On Main Street”.

Besides Larry Carlton, bassist Jaco Pastorius had the biggest impact on Mitchell’s late-’70s sound, his floating fretless tones and deft harmonics at their most sensuous on the lovely “Coyote” from Hejira, an album about her constant search for love and music, depicted as a flight from both boredom and the anchorages of partnership and marriage. Accordingly, the songs are missives from a variety of locales (New York, LA, Memphis, Savannah), a succession of hotel rooms, and a string of lovers – literally, in the closing track’s title, “The Refuge Of The Roads”.

Unfortunately, Joni’s Jazz Odyssey leads her into less agreeable territory on the double-album Don Juan’s Reckless Daughter and Mingus, the tribute album of songs co-written with the late Charles Mingus. On the former, Pastorius’s bass becomes deeply irritating, evoking the supercilious self-satisfaction of ’70s jazz-rock, while the side-long semi-improvised jazz symphony “Paprika Plains” is one of the least appealing items in Mitchell’s catalogue. One can’t help thinking that Tim Buckley blended folk and jazz so much more guilelessly, and infinitely more enjoyably, ten years before.

Sadly, Mingus finds her more deeply embroiled with such as Pastorius, Wayne Shorter and Herbie Hancock, pursuing the etiolated, lifelessly academic jazz style of the era. Her description of the pieces as “audio paintings” exactly fingers the problem: I don’t want audio paintings from a great songwriter, I want songs. Is there something wrong with that?
Andy Gill