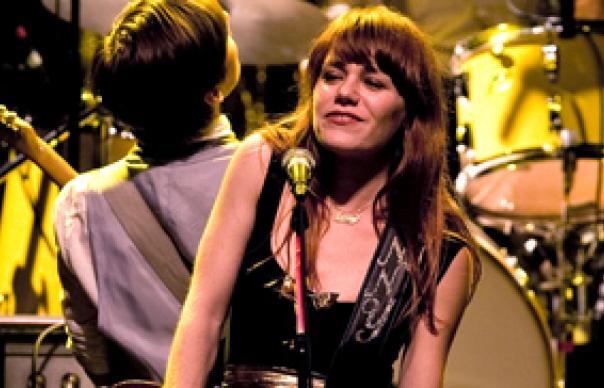 There are many worse positions for an artist to be in than burdened with the necessity of following up a classic. Jenny Lewis’s 2006 solo debut, Rabbit Fur Coat, co-credited to backing vocalists The Watson Twins, was just such an artefact, a nigh perfect collection of deceptively diffident, wickedly barbed country songs wondrously illuminated by Lewis’s astonishing voice: an instrument which somehow combines the guileless balladeer’s sincerity of a Linda Ronstadt with the deadpan comic’s timing of a Liz Phair.

Delightful though it would be to be able to report that Acid Tongue merits the same deafening applause as the tough act it follows, it would also be dishonest. Though the new album’s flaws are largely due to the always eminently forgiveable fault of over-ambition, Acid Tongue as a whole lacks the keen focus of its predecessor (a similar trajectory, coincidentally, can be detected in Lewis’s other job with Rilo Kiley, from their magnificent 2004 album More Adventurous to last year’s muddled Under The Blacklight). Rabbit Fur Coat had the clear sense that Lewis had a plan – ie, to make a witty, wise, gently sarcastic country record – and had executed same with nerveless efficiency and considerable panache. Acid Tongue feels much more like the result of assembling a bunch of one’s (admittedly, in Lewis’s case, unusually musically distinguished) mates in a studio to see what happens.

And some great things do – as is probably inevitable when your supporting cast includes Zooey Deschanel, Black Crowes’ Chris Robinson, Rilo Kiley’s Jason Boesel, Beachwood Sparks’ Dave Scher, Elvis Costello, Johnathan Rice, Paz & Ana Lenchantin, and M Ward, among others. Said great things are a while in arriving, though. The opening tracks, “Black Sand” and “Pretty Bird”, are both slight if attractive enough, introducing a hitherto rarely heard fragility in Lewis’s usually warm vocal, but they’re quickly overwhelmed by an eruption of hubris so monumental that it’s strangely impressive. “The Next Messiah”, which clocks in just short of nine minutes, is a baffling jerry-rigging of four discrete movements, any one of which might have been a decent, if modest tune – especially the introductory episode, which suggests Bobby Gentry warbling something by The White Stripes. In the event, however, the listener who sits through the whole thing is likely to end up feeling rather like a golden retriever being taught backgammon, ie somewhat perplexed. “Bad Man’s World”, which follows, is another sparse, brittle tune, an obvious swing at a classic torch ballad (“It’s a bad man’s world/I’m a bad man’s girl”) which fails to connect only because one can, at this point, reasonably expect more from Lewis as a lyricist.

From that point on, fortunately, there’s a perceptible sense of Lewis finding gear. The title track is a rueful reminiscence buoyed by a knelling acoustic guitar and a choir of Lewis’s stellar collaborators on backing vocals, “See Fernando” a gleeful rockabilly thrash with a fantastically unreconstructed guitar solo punctuated by surf-rock drum fills, “Godspeed” managing somehow to be everything the opening two tracks weren’t, quite: it’s a beautiful song, a angry yet affectionate open letter to someone making things unnecessarily difficult, blessed by an impeccably judged string arrangement.

Lewis was a key presence on Elvis Costello’s terrific “Momufuku” of earlier this year, and he returns the favour on “Carpetbaggers”, snarling and sneering in fine old-school fettle: the song itself is a playful mid-tempo country thrash, something of a throwback to the duet “The People’s Limousine” that Costello once recorded with T-Bone Burnett under the name The Coward Brothers. The tunes that follow soar to heights all the more startling given that Acid Tongue has taken so long in taking flight. There’s the show-stopping gospel-tinted ballad “Trying My Best To Love You”, slow-building romp “Jack Killed Mom” – which features a guttural monologue from Benji Hughes, and may have invented the Motown country death ballad – and self-consciously grand finale “Sing A Song For Them”, a big-hearted shout-out to the broken and beaten.

Acid Tongue is imperfect, but nevertheless slightly more than halfway to astounding. Its trespasses, which at least have the grace to be entertainingly odd, should be forgiven.

“I tend to just write songs regardless of where they’ll end up, then the songs seem to dictate where they belong. But I do enjoy the challenge of writing outside my comfort zone.”


Was the cast of backing musicians assembled deliberately with the songs in mind, or did it happen more organically?

“We carefully chose the musicians based on the tunes, although we did recut several songs on the record with different band configurations. For example, ‘Pretty Bird’ was an off-the-cuff recut that eventually edged out the original.”


How does a (well, nearly) nine-minute song in four movements happen?

“Very carefully! The song was originally three different songs that were trimmed and strung together. The transitions were the tricky part – how does one segue from one feeling to another, or into a completely different tempo? We had a lot of fun arranging that song – it was a triumph if we made it through the entire song without stopping. But the truth is that I’ve always wanted to sing a medley, a la Barbra Streisand.”