Her most intimate and imaginative yet 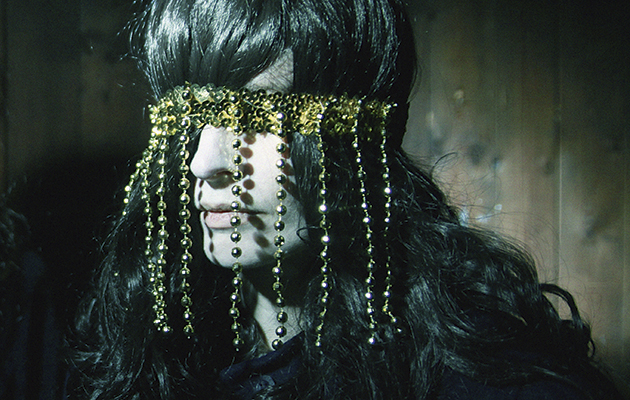 Throughout her career, Jenny Hval has seemed to take pleasure in picking the scabs off our futile inhibitions. On Blood Bitch, however, as its uncompromising title suggests, the Oslo-based musician has picked one of the last taboos: menstruation.

It’s not a topic that’s new to her, as her low-key debut, To Sing You Apple Trees (2006), will attest. Released under the pseudonym Rockettothesky in 2006, it offered a set of gorgeous melodies delivered in a sweet, girlish voice to an appealingly quirky backing that ranged from confessional to indie-pop. These rosy-cheeked songs suggested a fondness for structural playfulness, something she’s increasingly exploited since. But Hval’s greatest strength was, even back then, her lyrics. Some excelled simply for their poetry – “Leaned against the bar like a straw in a cocktail glass” (“Cigars”) – but others leapt out for their focus on ‘unmentionable’ subjects, not least the candid opening to the facetiously titled “A Cute Lovesong, Please”: “When you think of me do you masturbate?/I want to know that I can make a man ejaculate/You know it’s not pretty but you make me menstruate”.

Since then, Hval has been quietly carving a niche that’s almost exclusively hers, gliding fearlessly from mournful torch songs to musique concrète as she refines her explorations of physicality and desire. 2015’s metamorphic Apocalypse Girl stirred greater interest, not only for her resolute reclamation of the word ‘cunt’, but her latest is not only her most sophisticated, but also her most distilled. Inevitably, much of its allure arises from its lyrical complexity: few artists could sing with such tenderness and conviction of being caught in “a sexual holding pattern/Stuck in erotic self-oscillation”. But its restless, reckless shifts in musical style are just as astonishing. Much of “In The Red”’s 145 seconds are taken up by the sound of Hval panting, and a field recording of a seemingly flippant conversation opens “The Great Undressing” with the disclosure that the album is about vampires. On the exquisitely tense “Female Vampire”, however, her voice is at its most delicate, bounced between blunted synth jags and subtly driving percussion, and “Conceptual Romance”’s mood shifts from the heartbroken to the angelic, Hval swathed in pillowy keyboards that can’t help but recall 10cc’s “I’m Not In Love”.

“Secret Touch”, meanwhile, finds her returning to the lo-fi simplicity of her debut, testing the limits of her voice over a beatbox rhythm as she declares that “flesh is the loneliest creature”, before going on to offer a startling confession about how kisses help her “to avoid thinking of death”. Elsewhere, her material is even more challenging, but no less captivating: on “Untamed Region”, amid ghostly wails, documentary maker Adam Curtis can be heard discussing “the strange mood of our times”, before Hval recites details of dipping her finger in blood she’s left on hotel sheets. “The Plague”, too, stitches together tabla drums, radio samples, distorted shrieks, early ’90s Norwegian black metal drones and an amorphous lullaby.

Some of it is occasionally – suitably – impenetrable. But it indicates, too, how Hval blurs what is and isn’t traditionally appropriate for musical composition, just as Holly Herndon and, in her more recent work, Björk have done. It also underlines her intent to create a narrative without Blood Bitch ever disappearing into the realms of the ‘concept album’. Speaking to Uncut, she talks of her desire for the record to “stumble into new, noisy rooms with their own life”, and this indeed encapsulates the unique and, crucially, feminine voyage it undertakes.

Nonetheless, though Hval steers us from a revelatory fascination with her body to critiques of capitalism and romantic deprivation, from lush synth-pop to knowing, mutilated soundscapes, Blood Bitch is not without its sanguine displays of humour: the knowing puns in its song titles, for instance, or the description of a doctor’s appointment in which “the speculum pulls me open/Spacing the space/ Accidental sci-fi”. Hval’s approach has always been equal parts instinctive, intellectual and whimsical, but Blood Bitch confirms her singular methodology is now at its most surgically precise and bold. In realising her uncontainable, bewildering ambitions, one might even suggest it represents Hval’s coming of age.

Q&A
Jenny Hval
What provoked your fascination with the body?
Uncontainable desire and a broken heart. And the need to create a more interesting body than the one I was given and the way it was addressed. What I had just wasn’t enough.

Why do you think so few people are prepared to delve into these topics in such depth?
Fear and good manners. But art doesn’t have good manners, so I don’t understand why pop lyrics should.

Do you think male critics spend too much time dwelling on these themes?
Yes. When you become so focussed on society’s interpretations of isolated elements in an artist’s work, it’s easy to forget that the core of mine is not themes or issues or provocation. I might seem to talk about these aspects of my work a lot in interviews, but it’s because I answer questions. And when I return to making or performing music, I’m reminded that the core of my work is desire and expressing desire. But that is harder to talk about and acknowledge.

The new album boasts a certain theatricality that’s become increasingly important to your work. Have you encountered resistance to your willingness to step outside ‘accepted’ boundaries?
I think working with Lasse Marhaug has been very liberating for me in that he is equally disinterested in the difference between a song and a sound. This also means that we’ve worked incredibly detailed with the album as a sonic narrative and a sonically moving experience, and the accessibility of the sound of boiling water as much as the accessibility of a chorus.
INTERVIEW: WYNDHAM WALLACE