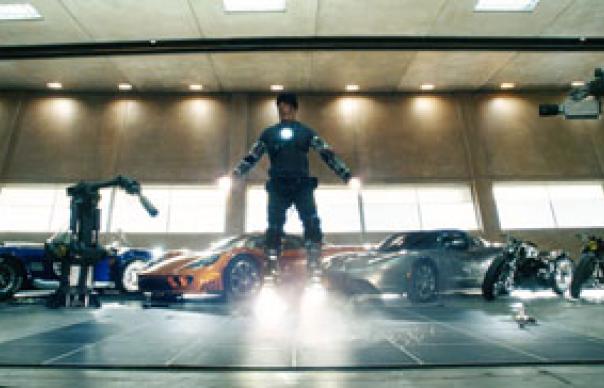 A glance at those involved – that swinging actor-turned-director, a smart cast with a light, ironic touch – leads you to hope this adaptation of the travails of the Marvel super-hero might be a knowing and exciting addition to the blockbuster canon, like Christopher Nolan‘s reinvention of Batman. It nearly is. But not quite. Somewhere in its narrative arc (there’s the sense a committee of re-writers has been involved) it loses sight of what it’s trying to be. CGI crowd-pleaser or hip, winking, one-liner fest? Solid franchise opener or comedic one-off allowing Robert Downey Jr to shine? It’s a bit of both and yet neither. A cracking first hour lapses into a noisy mish-mash of Transformers and RoboCop, and the generic finale doesn’t even cut it in terms of pure, budget-burning spectacle.

That said, there are many splendid moments. Iron Man‘s genesis is compelling. Billionaire arms magnate Tony Stark (Downey Jr) is a shallow, womanising, wisecracking, egotist. Naturally, Downey front-loads him with charm and wit. Kidnapped by terrorists in the Middle East, told to build them a WMD, he escapes by inventing a bulletproof suit. Which flies. Back in the USA he renounces warfare and becomes a maverick force for good. This displeases business partner Stane (Bridges, unrecognisable with bald pate and evil Lex Luthor cackle) and wins the admiration of his Girl Friday, “Pepper” Potts (Paltrow, bafflingly electing to play Lois Lane in the manner of Nicola from Girls Aloud).

The sky-borne duels of the deafening climax rather undermine the shrewd, often very funny set-up and the initially deft characterisation. There’s enough here, though, to suggest that now the obligatory rockets have been sent up, a sequel might focus on Iron Man’s brain, not bulk.