The many sides of Bob Dylan: provocatively, brillinatly imagined 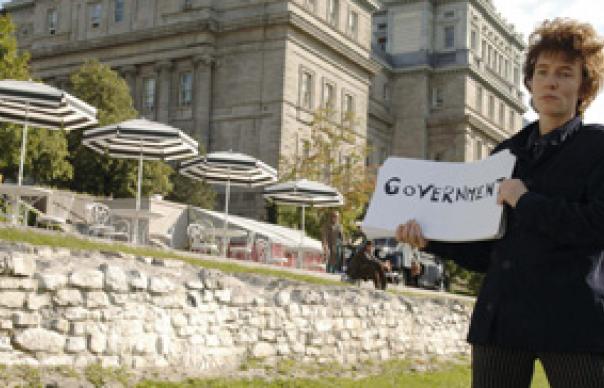 
I was worried beforehand that Todd Haynes’ I’m Not There – a film based on “the music and many lives of Bob Dylan” – would be a fiasco similar to his glam rock movie, Velvet Goldmine, an excruciating misfire, which seemed to me to get everything wrong that it possibly could. Here, though, Haynes gets everything right and the result is electrifying – an audaciously prismatic portrait of Dylan wholly as contrary, confrontational, playful, provocative, unpredictable, enigmatic, allusive and often just as downright funny as its subject. I loved the fuck out of it.

Drawing on Bob Dylan for its music and dialogue, some of it quoted directly from song lyrics, interviews, press conferences, various public utterances and the pages of Chronicles – which supplies, for instance, an early appearance by the “great wrestler”, Gorgeous George, who Dylan as an awe-struck teenager meets “in all his magnificent glory” – I’m Not There is on another planet entirely to the lumpy likes of Ray and Walk The Line, with their dull actualities and factual pedantry. Haynes is brazenly less concerned with straight biographical detail than the sheer magic of Dylan’s “many lives”, which he treats with amazing imagination, finding an appropriate visual style to illustrate his kaleidoscopic narrative by turning for inspiration to the films of Woody Allen (Stardust Memories, especially), Fellini, Godard, Richard Lester (and not just because of the slapstick sequence featuring The Beatles), Rob Reiner and Billy Wilder.

Much has been made of Haynes’ casting of six different actors – one of them a woman, another a 12-year old black boy, the astonishing Marcus Carl Franklin – to play ‘aspects’ of Bob. Dylan, however, is multitudes and I wondered, in fact, if six would be enough. In the event, it is, their stories inter-cut and overlapping, spanning decades but apparently all taking place at once.

Franklin is Woody, a brilliant personification of the Guthrie-smitten young Dylan, riding boxcars with his guitar, his head full of hobo dreams, given to colourful fabrications about his past and where he’s from, the sharpness of his banter reminiscent of Dylan’s quick-witted performances at so many legendary press conferences to come (“What brings you around these parts?” he’s asked. “Carelessness,” is the swift, hilarious response).
Christian Bale, meanwhile, is Jack Rollins, “the troubadour of conscience”, “the unwashed phenomenon” – a manifestation of Dylan as the emblematic voice of the protest movement, gaunt and unforgiving as the portrait of Bob on the sleeve of The Times They Are A-Changin’.

Rollins’ career is shown as a film-within-a-film, a series of extracts from a No Direction Home-style documentary – a highlight of which is a series of cameos by Julianne Moore as ‘Alice Fabian’, clearly and hilariously based on Joan Baez – that at one point recreates with evocative fidelity Danny Lyons’ pictures of the Civil Rights rally Dylan made with Pete Seeger in Greenwood, Mississippi in 1963. There’s also a vivid reconstruction of Bob’s famously drunken award speech to the Emergency Civil Liberties Committee, where he boozily castigated the audience of veteran liberals and identified himself with Lee Harvey Oswald, the alleged recent assassin of President Kennedy.

Haynes goes on to make an explicit and wholly plausible connection between the accusatory Dylan of the protest period with the born again Dylan who converted to Christianity and joined the Vineyard Fellowship in the San Fernando Valley, which here becomes a Pentecostal church in Stockton, California, where Rollins has become Pastor John, delivering sermons to his congregation in an echo of Dylan’s own performances at the time.

Bale’s cheerless intensity, well-wrought in a somewhat thankless role, is in marked contrast to the cocky swagger of Heath Ledger’s Robbie Clarke, a hip young actor, hailed as the new James Dean. Robbie, in the aviator shades and belted leather coats briefly favoured by Dylan in the early 70s, makes his name playing Jack Rollins in an angsty biopic called Grain Of Sand (closing line, despairingly delivered by Robbie/Jack: “I was only a pawn in their game!”). In a narrative strand played out against a background of the Vietnam, Haynes unflatteringly examines Dylan’s relationships with Suze Rotolo and Sara Lownds, here merged into a single character, Claire, played by an increasingly distraught Charlotte Gainsbourg. Robbie, shiftless arrogance to the fore, goes from loving Claire almost unconditionally to treating her with thoughtless contempt.

Prior to this, we have also seen Ben Wishaw – a dazzling young Hamlet a couple of years ago at the Old Vic – as Arthur, a mesmerising blending of the French poet Arthur Rimbaud and Don’t Look back-era Dylan, from whose press conferences Wishaw affectedly quotes as if in response to questions being asked under harsh lighting by unseen interrogators. Earlier, too, we have been astonished by Cate Blanchett’s Jude Quinn, who is the Dylan of Highway-61, a wired ghost, heading for meltdown, whose death in a motorbike accident opens the film. Blanchett is an actor I don’t often enjoy, but is here extraordinary, capturing with delirious perfection Dylan’s frenzied restlessness, fright, fragility and fatigue, as he fast approaches ultimate burn-out on the 1966 world tour.

Finally, in a Western sequence of weird beauty, populated by characters inspired by The Basement Tapes and The Rolling Thunder Revue, a grizzled Richard Gere is Billy The Kid, who in this dreamy version of well-known events has surrendered any claim to legendary immortality by not dying young at the hand of Pat Garrett, living now into old age in anonymous decrepitude, just his dog for company and the country going to the dogs around him – something ominous lurking in the distance, a call on the wind he must eventually answer. This is the Dylan of both Woodstock exile and rudderless 80s, remote and latterly bereft.
When Billy’s sense of who he was eventually is stirred, we see him hopping a freight train and in a boxcar finding the young Woody’s guitar, Dylan’s creative re-birth via the Never-Ending Tour neatly conveyed. Another new beginning for Dylan thus ends an amazing film.
Oh, and the music by the way is fantastic.