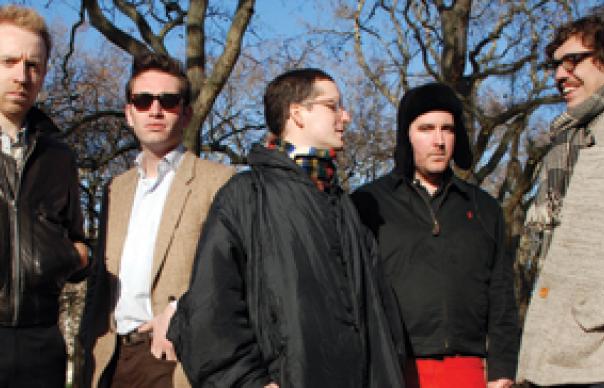 It cannot be said of Hot Chip’s particular muse that she is a complacent, idle creature.

In the decade that the London group have existed, they have done all of the following, mostly with considerable panache: become ardently beloved festival favourites, been the subject of widely celebrated music videos, acquired formidable reputations as DJs, collaborated with Robert Wyatt and Peter Gabriel, and remixed what feels like a substantial percentage of all the popular songs ever recorded. They’ve also now made four albums of their own, each at least interesting and at most astonishing. One Life Stand, by no means perfect is, at its best, their best yet.

It says much about Hot Chip that their errors tend to be of enthusiastically overcooking good ideas, rather than desperately wringing out bad ones. The opening track here, “Thieves In The Night”, is a case in point – a slow-building, multi-layered funky disco saunter, densely populated by ghosts of Visage‘s “Fade To Grey” too numerous not to have been deliberately summoned. It’s an extraordinary confection, supporting a soaring vocal melody, but rather outstays its welcome at just over six minutes. Not for the last time here, Hot Chip sound like they’re having too much fun to know quite when to stop.

The upside of this is that for the first time, Hot Chip sound entirely relaxed about the idea that they’re a pop group – One Life Stand contains little trace of the discordant outings or rather rigidly utilitarian dance grooves they seemed to feel obliged to deploy on previous albums. This is an album that sees Hot Chip freeing themselves of the surly bonds of their more orthodox dance and electronic influences and settling comfortably into the orbit of New Order and Pet Shop Boys (and possibly beyond, indeed – it is supremely undifficult to imagine “I Feel Better” as a globally ubiquitous hit for Madonna, and not just because of a passing resemblance to “La Isla Bonita”).

There are several possible shots at the big time here, all the more impressive for their apparent insouciance. The supremely pretty, melancholy gospel affirmation “Brothers” reminds why it was a shame that mid-’80s synth-pop pathfinders Dream Academy and It’s Immaterial didn’t have a second hit each. “Slush” is a quietly epic piano ballad, not unrelated to REM‘s “Everybody Hurts”, haunted by the ghostly babble of the positively Swingle Singers-style a cappella backdrop that loops behind it (a trope revisited on the album’s most obvious dance track, “We Have Love”). The title track is a brilliantly orchestrated corralling of Hot Chip’s riotously disparate influences: thunderous Daft Punk keyboard riffs, clamorous steelpan drum (contributed by Trinidadian legend Fimber Bravo), sounds which might well have been borrowed from a 1980s computer game, a warped vocal sample that might have wandered into the mix from Radiohead‘s Amnesiac, and a dash of Orange Juice-ish rhythm guitar.

These fabulous mŽlanges are decorated further by the voices of core Hot Chip members Alexis Taylor and Joe Goddard – the former fragile and feather-light, the latter mournful and mumbled, the both eerily complementary (as best demonstrated on the duet “Keep Quiet”). By accident or design, the lyrics repeatedly threaten to subside into the mindless positivity which makes so much electronic music feel like an aerobics lesson, only to reveal themselves as something darker, something deeper: for every “We have love, give it up, give it up”, there’s at least one “Heaven is nowhere…”

It isn’t a coincidence that this, Hot Chip’s most focused album, is also their finest – more ruthless editing in future will doubtless yield even more spectacular results. The most emblematic track of One Life Stand is “Hand Me Down Your Love” – a disco song set to a four-square rock beat, which briefly promises to erupt into a hands-in-the-air-like-you-just-don’t-care floor-filler before instead blooming into an expansive chorus and exquisite string arrangement. Like the album as a whole and the group who made it, it’s intriguing, beguiling, occasionally too clever by half – but never, ever boring.

Do you think of each LP as a progression from/reaction to its predecessor?
There was a fair amount of reaction to the last record, in that for that one we made a virtue of stylistic and acoustic/spatial differences, in small tribute to some of my favourite sprawling double albums. For this one, we felt it would be nice to make something which was more coherent as a listening experience.

With such a diverse array of influences – and band members – how torturous or otherwise is the process of deciding what’s a good idea and what isn’t?
We lost some great songs for the sake of the ‘whole’ that is the record, but they will surface soon, I am sure. It worked well in terms of all of us contributing. People seemed to know when to go to sleep, or to the pub, or make up a brilliant keyboard part, depending on the circumstances.

What do you learn from working with someone like Robert Wyatt?
A lot about working quickly, and using what you have at your disposal to great effect – but I think I’m still taking it all in from that experience, to be honest. His wife, Alfie, made us great food, as well, while we worked, and it was really amazing to be in their company.