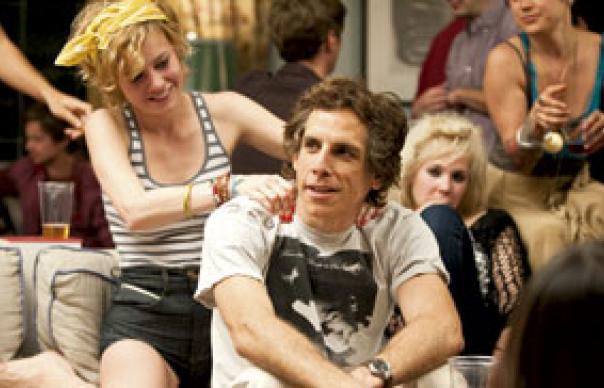 
An air of remorse hangs over Greenberg, Noah Baumbach’s sort of comedy about mid-life Generation Xers trying to grow up in the suburbs of Los Angeles. These, principally, are men and women who’re struggling uncomfortably to come to terms with genuine responsibilities – raising children, full-time jobs – and sinking incrementally into rehab, anxiety and divorce. “Youth is wasted on the young,” says one character, quoting Oscar Wilde. “I’d go further,” says Ben Stiller’s Roger Greenberg in reply. “Life is wasted on… people.”

In his twenties, Roger had been in a rock band, but blew his chance at landing a recording contract. He walked out, abandoning his bandmates, and fled LA for New York, where he became a carpenter. Things have not gone well for him, though. There was an unspecified mental breakdown and a period spent in an institution. As the film opens, he returns to LA for the first time in 15 years to house sit for his successful elder brother – “I think he’s in Vietnam opening a hotel, or something” – and look after the family’s pet German shepherd.

Roger, we soon discover, is sulky, neurotic and self-obsessed. He spends much of his time firing off letters of complaint to, variously, the Hollywood Pet Taxi Company, American Airlines, the Mayor of Los Angeles and Starbucks. But what else has he got to occupy him? “I was a carpenter, you know, for money,” he tells ex-girlfriend Beth (Jennifer Jason Leigh, who also co-wrote the screenplay with her husband, Baumbach). “Right now I’m trying to do nothing,” he explains. “That’s brave at our age,” she observes.

Along the way, Roger tries to reconnect with his old bandmates, Brit ex-pat Ivan (Rhys Ifans) and Eric (Mark Duplass), but he doesn’t register that they’re still bitter that he walked out on them. In turn, Ivan, who becomes a foil to Roger as the film develops, is struggling with his own problems: the chasm between his twenty-something dreams and fortysomething reality. “It’s huge,” Ivan tells Roger. “The life you never planned on.”

With all this swirling around, Roger starts an affair with his brother’s PA, Florence (Greta Gerwig). She’s a college graduate, drifting through her early twenties, no particular destination in mind. She’s just come out of a relationship and is as damaged as Roger.
“I don’t want to go from just having sex to sex to sex,” she says. “Who’s the third ‘sex’?” asks Roger. “You,” she replies.
Roger, though, lashes out at her. “Hurt people hurt people,” Florence comments – which you can take to be the key theme for this movie about dysfunctional characters and their relationships.
This is familiar territory for writer-director Noah Baumbach, whose previous films The Squid And The Whale and Margot At The Wedding similarly centred on wounded, often insufferable protagonists. Baumbach’s great achievement with those films – and which he repeats here – is to engage us with a parade of difficult characters. We stay with Roger perhaps in the hope that, by the movie’s close, he’ll have learned something.

Ben Stiller, of course, has a formidable track record in playing unlikeable characters in comedies, yet he rarely gets the chance to do “proper”, grown-up acting. But as his performances in both Reality Bites (which he also directed) and the little-seen Permanent Midnight suggested, Stiller is capable of more than just delivering the laughs. In fact, Greenberg is a groundbreaking performance for Stiller who’s unafraid, it seems, to risk alienating fans of his more mainstream movies like Meet The Fockers. Certainly, Stiller’s Roger is a credible addition to a list of hard-to-like movie leads – up there with pretty much anyone in a Wes Anderson film (Baumbach co-wrote Anderson’s 2004’s movie The Life Aquatic With Steve Zissou). In one brilliant scene towards the end of the movie, Roger rants to a group of teenagers about the difference between the Twitter and Generation X generation – how blithe they are – while taking all their coke. It’s both tremendously funny and deeply excruciating to watch.

In all this, Greta Gerwig’s Florence offers some kind of hope. You’d imagine her being played by Diane Keaton in another era; she’s airy, light and, despite her own set of problems, is broadly optimistic for the life stretching out in front of her. Rhys Ifans, too, is excellent. Ivan is a good-natured man who’s managed to get his life, and family, back on track after losing it. For the most part, he is prepared to try to help Roger if he can, but even he finally loses patience with his friend: “We never talk about good things,” he yells in a show-stopping final argument.

One last nugget of information for you: the film comes with a fine soundtrack from LCD Soundsystem’s James Murphy. The key, I think, is a beautiful piano ballad, “Photographs”, that seems to find Murphy’s narrator mourning long-gone relationships and happier, more youthful days, captured on film. It’s striking how appropriate this is to Roger’s own situation. Roger’s great tragedy, after all, is his inability to shake off the disappointment of his own wasted youth.
Michael Bonner