Grateful Dead – All The Years Combine

The full extent of the Dead’s official DVD arsenal... 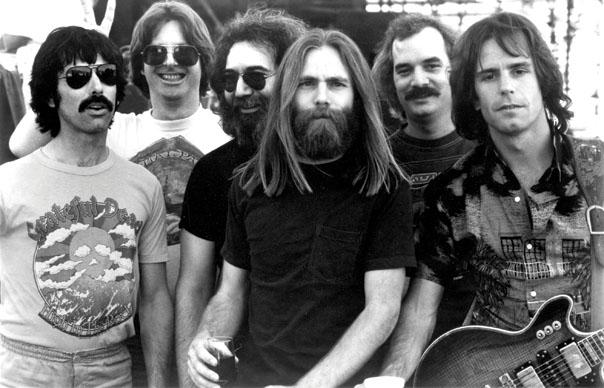 The full extent of the Dead’s official DVD arsenal…

According to the Dead’s chief audiovisual archivist David Lemieux, there are now over 2,500 videotapes in the band’s vault, alongside its renowned stash of 16,000 audio tapes. All The Years Combine may only be scratching the surface, but it’s the most complete Grateful Dead DVD collection to date: 14 discs taking in 10 concerts, ranging from The Grateful Dead Movie, filmed in 1974, to an RFK Stadium show in 1991, featuring what turned out to be the Dead’s final line up. Joining these films are a disappointing 55-minute conceptual film So Far, from 1987. Completing the box is an exclusive bonus disc, the centrepiece of which is Justin Kreutzmann’s beautifully crafted documentary Backstage Pass, which affectionately chronicles every musician to have played in the band between The Acid Tests in 1965 and the Dead’s final concert at Soldier Field, Chicago in July 1995.

The two Seventies concerts are the most elaborate, painstakingly edited films in this collection. For atmosphere and thrills, The Closing Of Winterland, from the Dead’s annual New Year’s Eve concert in 1978, has the edge over the more venerated Grateful Dead Movie. It’s distinguished by a devastating second set that comes to life on a smouldering “Terrapin Station”, ending with a rousing “Not Fade Away” featuring War’s harmonica player Lee Oskar and scything guitar from Quicksilver’s John Cippolina. In contrast, Dead Ahead from Radio City Music Hall in October 1980, celebrates the final tour where the Dead opened each night with an acoustic selection, sitting on stools and picking genially through their own homespun folk anthems “Ripple”, “Bird Song” and “To Lay Me Down”.

Truckin’ Up To Buffalo, a full show from July 4, 1989, is memorable for another inspired second set. The Dead always took a while to hit their stride; emerging after the first break full of smiles and encouraging nods, before unleashing a brutal “All Along The Watchtower”, straight into a scorching “Morning Dew” and followed by another “Not Fade Away”. This version stands out for the unusually animated interplay between a jovial Jerry Garcia and keyboardist Brent Mydland.

The four discs from the more intimate View From The Vault series were compiled from basic videotaped recordings made for the big screens at stadium gigs. Using only the two track sound straight from the PA, they are video equivalent of Dick’s Picks, the Dead’s long-running series of live albums. Two of them date from 1990, another combines a couple of the group’s own sets on the spotty Dylan And The Dead tour in 1987, while the best is an RFK Stadium show from June 1991, filmed a year after Brent Mydland’s death, when keyboard duties had been picked up by Vince Welnick and Bruce Hornby. Once again, its the second set that’s the best, the group vigorously tearing into the grand Blues For Allah song cycle, ”Help On The Way”/”Slipknot!”/”Franklin’s Tower”. It’s followed by a spectral “Dark Star” before Bob Weir, full of gusto, takes on “Turn On Your Lovelight”, traditionally one of former frontman Pigpen’s down-and-dirty showstoppers. The mood intensifies as Garcia steps up to sing “Stella Blue”, then an impassioned “It’s All Over Now Baby Blue” with the fresh-faced Hornsby on accordion. This show is very much a last hurrah for the Dead; arguably, they never really reached such magical heights again. Witnessing their almost evangelical bond with audiences, the recurring image is one of warmth and camaraderie; just a bunch of working stiffs who liked nothing more than playing in the band.