If this is to be Clint's final role, it's a powerful, cussed farewell 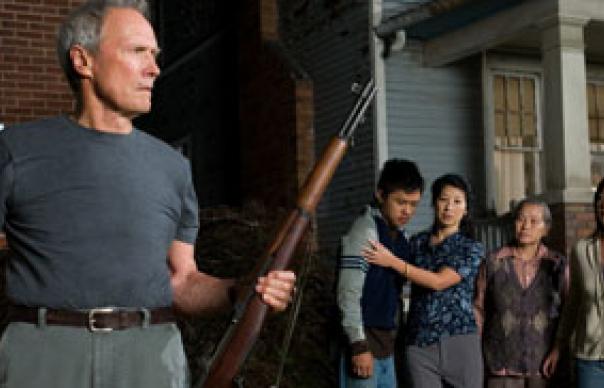 What makes Gran Torino more than the merely watchable, well-meaning, but heavy-handed parable about racism and redemption it may have been in the hands of a lesser film-maker is Clint Eastwood, directing himself in what, at 78, he’s hinted may be his final screen performance.

If this is truly the case, it’s a rousing last hurrah, a snarling salute to the leathery invincibility of every uncompromising, provocative, mean-eyed motherfucker he’s ever played – from the Man With No Name, to Dirty Harry, Josey Wales, William Munny in Unforgiven and even Frankie Dunn, the veteran fight manager in Million Dollar Baby. No one over the years has filled the screen with as much seething pent-up violent menace as Clint, and even pushing 80, you would not fancy your chances if you had to go up against him. “Ever notice how you come across somebody once in a while that you shouldn’t have messed with?” he asks someone here, squinty-eyed and scowling, fury growing within him, his voice a wholly intimidating growl. “That’s me.” Later, after giving one punk a severe beating, he leaves him with a terse warning: “If I have to come back, it’s going to be ugly.” You have no reason to believe this will not, painfully for someone, be the case.

Eastwood in Gran Torino is Walk Kowalski, a retired veteran of Detroit’s once-thriving automobile industry, recently widowed. Walt is bitter and cantankerous, a brutally intolerant racist, a man with a grudge against everything in the world that doesn’t conform to his own crude opinion, including his own sons and their ghastly children. He lives alone, with his dog and his guns, in a neighbourhood that has changed around him in ways he can’t accommodate, a recent influx of Asian immigrants, Hmong refugees, former allies of America in Vietnam, especially inflaming his angry prejudice. About the only thing that lights up what’s left of his life is the 1972 Gran Torino, a car he helped build on the Ford assembly line that now sits in his garage, a gleaming metaphor for what Walt no doubt believes was a better America.

Walt makes you think of the crude and mirthless Archie Bunker, the American incarnation of Alf Garnett, and Peter Boyle as the eponymous homicidal blue-collar bigot of John Avildsen’s 1970 cult classic, Joe (coincidentally just out for the first time on DVD). There’s nothing remotely likable about Walt, he’s an unpleasant furnace of hostility, and Eastwood fearlessly doesn’t attempt to make him to any extent sympathetic.

Walt has elsewhere been described as ‘Dirty Harry in retirement’, and there is merit in this apparent flippancy. You can certainly imagine Walt going to see the original Dirty Harry movie, for instance, and cheering Harry Callahan’s vigilante brutality, thus missing the point of Don Siegel’s ambiguous, provocative challenge to liberal America. By the time his own story is told here, however, you like to think Walt would have seen Harry not so much as Travis Bickle with a badge, but a tragic hero as flawed, dangerous and frighteningly heroic as John Wayne’s Ethan Edwards in The Searchers which Dirty Harry so often resembles (both films crucially involve the search for an abducted girl).

Back in Detroit, meanwhile, Walt finds himself incrementally drawn into the world of his previously-despised Hmong neighbours, specifically the sparky Sue (Ahney Her, wonderful) and her younger brother Thao (Bee Vang), a likable dreamy kid being pressed by his machine-gun toting cousin to run with him and his gangbanger buddies.

When Walt takes the kid’s side in a rowdy confrontation between the gang and Thao’s family, he’s celebrated as their saviour, a hero to Thao, who comes quietly to idolise him. For his part, Walt is touched by the uncomplicated generosity shown towards him by the grateful Hmong, who he finds are altogether more preferable company than his own family. He has for a moment, it seems, found a kind of peace, a truce declared in his ongoing war with everything around him.

Then it all goes bad in a hurry. Humiliated by Walt, the gang take dreadful revenge, recklessly inviting a final showdown. And now we think we know where we are going here, and prepare to be returned to the savage universe of, say, High Plains Drifter, Clint about to become an agent of bloody retribution. We also think inevitably of Unforgiven, and Clint as William Munny, the retired gunfighter who by the film’s end has once again become a formidable killing machine, violence his answer to everything and bodies piled up around him. You may also be reminded of David Cronenberg’s A History Of Violence, in which Viggo Mortensen as Tom Stall, a reformed former mob killer, reverts to murderous type when his peaceful new family life is threatened by pathological types from the past he believed was behind him.

We know already, for instance, that Walt is familiar with violence. He fought in Korea, that appalling forgotten war, where he did things he would prefer to forget. We get a harrowing glimpse of his experience there when Walt confronts one of the Hmong hoodlums terrorising Thao’s family, shoving the barrel of his old army-issue M1 in the punk’s face and telling him in one of the most powerful scenes Eastwood has performed in: “You’re nothing to me. We used to stack fucks like you five feet high in Korea and use you for sandbags.”

The growing intimacy between Walt and Thao by now also inevitably recalls Shane, in which the young Brandon de Wilde is besotted by Alan Ladd’s haloistic gunfighter, and also The Shootist, in which in his own valedictory screen appearance John Wayne as the dying gunman John B Books must similarly resolve a violent conflict without encouraging a young man’s emulation of his gun-toting ways. The Shootist was, of course also the last great film directed by Don Siegel, Eastwood’s most influential movie-making mentor, whose terse, understated, classic visual style informs every crisp frame of Gran Torino.

I’m not sure the way in which Eastwood here resolves an identical dilemma is the unequivocal denial of his violent cinematic past that has been suggested elsewhere. But the way Walt in the end deals with the havoc he has partially unleashed suggests levels of human contact that have not always been evident in his films and in this wholly vintage performance he has perhaps found a new kind of heroism.