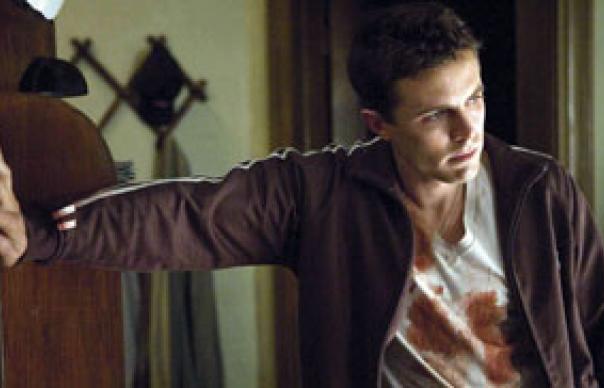 When a four-year-old kid is snatched from a working class single mom, private eyes Patrick and Angie collaborate with the cops to find the child – a tortuous case that will lead to more than one tragic dead end.

Child abduction sometimes seems to have become a national obsession, a collective nightmare that haunts every parent and quite a few who aren’t. So it’s hardly surprising that the release of Ben Affleck‘s directorial debut was delayed last year in deference to the Madeleine McCann case.
Ironically, it’s now virtually impossible to watch the film without thinking of Shannon Matthews. Not that the plot of Dennis Lehane‘s novel mirrors these news stories in specific details, but it does throw up strikingly similar, troubling issues about class and what may or may not constitute “acceptable” parenting.

That said, Gone Baby Gone is a twisty, penetrating mystery thriller, not a social drama. Film fans will know Lehane from Mystic River and Shutter Island (Scorsese’s next movie), but he first hit paydirt with working class boyfriend-girlfriend private investigators Patrick Kenzie and Angie Genarro, one of only three pi couples who come to mind (the others are Nick and Nora Charles in Hammett’s Thin Man series, and TV’s Hart To Hart).
In an inspired (if nepotistic) stroke, Casey Affleck has been cast as Kenzie. The actor is on a roll right now, on the back of The Assassination Of Jesse James… and Lonesome Jim, but he’s still an unlikely leading man: baby-faced, too short and slight and mumbly. Course, his big brother is wise to all this.

It seems like everyone Kenzie meets takes the measure of him in a glance, and they’re hardly trembling in their boots. Mostly, their first impulse is to address his partner, Angie (Michelle Monaghan, from Kiss Kiss Bang Bang), evidently the grown up in the relationship. You can see how this grieves him. In a fierce early scene a verbal pissing contest in a bar starts ugly and quickly degenerates to the point where Kenzie whips his gun out. Cut him down he comes back harder and meaner. More than most, this dick has something to prove.

This case takes him back to the old neighbourhood. A four-year-old girl has been snatched from her apartment while her mother was next door with a friend. Kenzie knows the mom from high school. Helene (Amy Ryan) is a piece of work; a coke head with a foul mouth and a chip on her shoulder, she’s about as maternal as a broken bottle.

A familiar face from HBO’s The Wire (which Lehane has also worked on), Ryan earned an Oscar nomination for this startlingly unsentimental supporting performance. It’s not giving away too much to say that it’s Helene – and her daughter – we’re left to think on after the credits roll. Ben Affleck’s become such a media punching bag there is a temptation to hyperbolize his first directing effort (he also co-wrote the script with Aaron Stockard), but it may be that he’s found his forte. This is more than another “actor’s film”, it’s a compelling piece of storytelling and edgier than you would expect. There’s real authority here.

Probably the smartest thing Affleck did was surround himself with talent. The cast is a given, Ed Harris is on the money as the lead cop on the case; DP John Toll shot The Thin Red Line and Braveheart; editor William Goldenberg cut his teeth on Michael Mann’s movies. Composer Harry Gregson-Williams contributes a lovely, melancholy score.

Eastwood and Scorsese worked hard to bring Boston to life in Mystic River and The Departed, but Affleck was born and bred here, and Gone Baby Gone feels more intimately grounded in the dirty streets and scummy bars; the aggressive pride in the faces of the working poor who live there. “I always believed it was the things you don’t choose that make you who you are: your city, your neighbourhood, your family,” Kenzie philosophises plausibly in the opening voiceover.

The movie draws hard on that authenticity because Lehane’s elaborate plotting works better on the page than on screen, where its cleverness inevitably feels a bit suspect. And while it’s easy to sympathize with Affleck’s impulse to slot Morgan Freeman into what seems like a make-weight role – as the head of the cops’ missing persons unit – it’s his only serious misjudgment. The casting puts the spotlight in the wrong place at the wrong time. Where Affleck sees only a great actor, the audience may be distracted by the presence of the star.

Casey Affleck isn’t a star – not yet anyway – and that helps us to see Kenzie more clearly for what he is, and to question what he does. It’s easy to grant stars a free pass – Ben knows that, too. With Patrick Kenzie, we’re never quite sure. If he shoots someone, he worries about it afterwards. And he keeps on worrying even when he’s got the answers he was looking for. After all, what’s a pi to do if those answers don’t solve anything? What if they only make things worse?

And Angie Genarro? She’s the priest in this movie, on hand to offer benediction, forgiveness, and ultimately penance. Whether her partner deserves better or worse is just one of the troubling question marks this impressive thriller dares to leave hanging in the air.