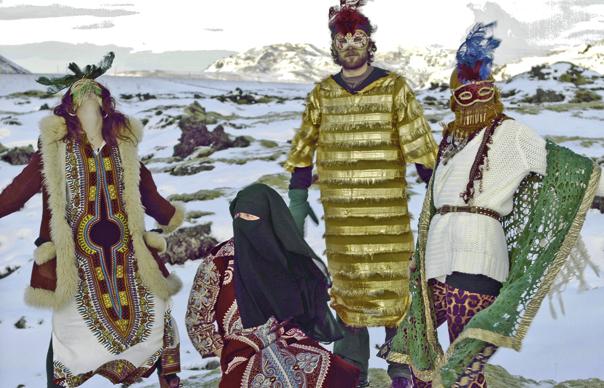 Psychedelic, revolutionary music has often gone hand-in-hand with communal living. Take what seem like Goat’s two main poles of influence: from Nigeria, Fela Kuti and his Kalakuta Republic, out of which the Afrika 70 collective would regularly pump their 15-minute Afrobeat monoliths railing against government corruption and army brutality; and from West Germany, the Amon Düül commune, a group of radicals who indulged in far-out experimentation – politically, pharmaceutically and musically.

Churning out boundary-breaking jams from a cult-like compound isn’t a recipe for success in our era of cultural commodification, though. Still, Goat, reputed commune-dwellers from a village in northern Sweden that they claim has never relinquished its centuries-old pagan beliefs, have done a surprisingly good job of crossing over. After releasing their debut album, World Music, in 2012, the group now draw large crowds at major festivals, are signed to Sub Pop in the US, and headline London’s 1,700-capacity Roundhouse later this year.

That they sport fantastic and outlandish tribal masks and robes straight from some mythical Nubian bazaar, and have managed to retain a haze of mystery – we still don’t know the names of most of their members, or how many they number, a rarity in this age of hyper-connectivity – can only have increased their notoriety. But really, none of this would matter if Goat’s music wasn’t so eminently appealing.

The formula here on Commune, their second full-length, is similar to their debut, where they skilfully took the spiralling, sinuous jams of Kuti or Düül, and recast them in a more accessible mould. Each of the nine songs is highly listenable, streamlined (the longest track is just under seven minutes), and loaded with classic-rock vibes (wah-wah pedals take a real kicking throughout) and simple, chanted hooks from their two vocalists.

At times, the masks slip to reveal not much underneath – while their forebears sang of revolution, liberation and very real political issues, Goat are content to spoon the listener beige, quasi-mystical pronouncements. “There is only one true meaning with life, and that is to be a positive force in the constant creation of evolution,” goes “To Travel The Path Unknown”’s prologue. You can hardly imagine soldiers murderously storming the Swedes’ compound as they did Fela’s, after hearing these lyrics. These missteps serve to make Goat seem like a post-modern, cartoon version of a ritualistic jam band, trawling shallow waters instead of unknown depths.

And yet, forgetting the masks and the mystical gubbins, the songs are such thrilling journeys that it barely matters. As the listener sinks into the grooves, more diverse influences appear – Saharan guitar curlicues are still present throughout, but there’s a taste of Peruvian folk music on “The Light Within”, while a new purchase, a Turkish electric saz, is fed through a wah-wah on the excellent “Hide From The Sun”, perhaps the most compellingly ‘Eastern’ Goat have yet sounded. And in more of a departure, the pulsing, jagged “Words” channels Silver Apples by way of Portishead’s Apples-aping “We Carry On”.

The album peaks near the end of its relatively short, 38-minute run with the heat-freckled drone-rock of “Bondye”, and “Gathering Of Ancient Tribes”, which comes on like Tinariwen armed with Marshall stacks and Big Muffs. It’s an onslaught that suggests if Goat plan to wander further in the future, they could successfully explore the realms of stoner-metal. The album ends, Möbius strip-like, with the same Tibetan singing bowl chimes that open it.
Because we now know the nature of the beast, Commune is less immediately striking than World Music. But if Goat seem unlikely to lead you to liberation or spiritual transcendence, their compact jams, the vivid ingredients cherry-picked from disparate corners of the globe, are still as groovy and downright joyous as they ever were – devotional music for the feet. And they’ll sound just as mighty on those festival stages.
Tom Pinnock

Q&A
“Funkmaster Goat”
Could you tell us a little more about your hometown, Korpilombolo?
It was founded in the 16th Century by Samish travellers. Later they were joined by travellers from Western Africa and together they created a spiritual commune based around openness towards the different cultures and people of the world. Through travelling and collectivism we have always managed to preserve and develop this commune and its beliefs.

What is living in a commune really like?
We all live in various collectives or communes. Society is nothing but a big collective. Your job, your family, your friends are others. So you tell me. What is important is that you recognise this and try to take a positive role in your collectives.

How do you think Commune differs from World Music?
Both albums were mainly created in our own studio, but this time we could use the studio better. So we have experimented more with sounds. We have also brought in a wider range of influences and instruments – some new flutes, a saz and a lot more percussion instruments.
INTERVIEW: TOM PINNOCK