Go-Kart Mozart – On The Hotdog Streets 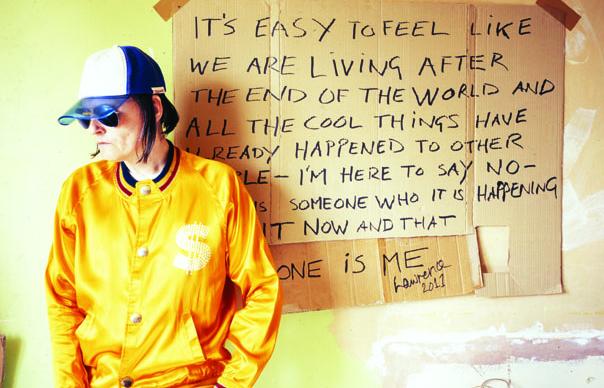 For a man dogged by misfortune for much of his 30-year career, some of it self-inflicted, Lawrence finds himself in an unusually healthy position in 2012. He is the subject of a touching and funny documentary, Paul Kelly’s Lawrence Of Belgravia, which completed a sold-out cinema tour in May and also doubles as a 90-minute plug for On The Hot Dog Streets, his third Go-Kart Mozart album, while in January a French publisher put together a beautiful book on Felt, Lawrence’s first, widely cherished band.

Just last year, US janglers Real Estate covered Felt’s “Sunlight Bathed The Golden Glow”; Girls went one further and released a doe-eyed tribute called “Lawrence”. Love for Lawrence and his groups – Felt in the 1980s, Denim in the ’90s and latterly Go-Kart Mozart – has never been in short supply, but he hasn’t helped himself, nor his idiosyncratic quest for an old-fashioned kind of pop stardom, by releasing a series of eccentric, silly and occasionally brilliant records.

With Denim’s 1997 album Novelty Rock he minted his own peculiar genre of bubblegum synthpop – a high-concept, deeply unfashionable blend of T-Rex and the theme from Sorry – that he’s continued to explore in great detail with Go-Kart Mozart. Their tacky, seemingly tongue-in-cheek ditties like “Wendy James”, “Drinkin’ Um Bongo” or “On A Building Site” sit awkwardly beside Felt’s precious catalogue, but the cult of Lawrence is such that even today, 23 years after the last Felt album, his admirers tend to overlook his Novelty Rock follies in the hope that he’ll one day return to more romantic means of expression. He’ll argue that it’s taken him years to perfect the short pop song; in Felt, he says, he found that difficult.

As it happens, On The Hot Dog Streets is the final instalment in Lawrence’s Novelty Rock phase – naturally, he hopes a new generation of bands will take up the mantle – and it’s also his richest, most enjoyable and conceptually solid record since Denim’s ’92 debut Back In Denim. As always, his lyrics are a joy: a droll mix of intimate autobiography (“I Talk With Robot Voice”), rock-star fantasy (“Lawrence Takes Over”) and social commentary (“White Stilettos In The Sand”), he conjures a grubby cartoon Brummie Britain stuck in his default vision of the ’70s, when the synthesiser was a thrilling new instrument, the charts actually meant something and the whole country would watch Top Of The Pops. “You’re a lollipop cross on a municipal grave / A short set of numbers not even a name”, he sings on the wistful chug of “Retro-Glancing”, and touches on political satire in the nearly-contemporary “Blowin’ In A Secular Breeze”: “We’re chanting down with Westminster sleaze, my boys / If only Blair was secular he could stop the war and reflect on a full-blown 20th century disease” – set to the kind of longhaired pub-rock sing-along that crops up on TOTP2 from time to time.

At 50, Lawrence seems to have a teenage preoccupation with sex, though from his lyrics it’s hard to tell how he really feels about girls. He can amuse – “There’s no one sweeter than my underage cheetah when she’s just drank a litre of wine”, from “Queen Of The Scene”; and bemuse – “I don’t want any girl to hurt me anymore / I’m sick and tired of their abuse / Yet I admit I’m still susceptible to vaginas allure”, from “I Talk With Robot Voice”. But still it’s hard to take him seriously when the music is this incredibly tuneful artificial construction of ’70s French electronic disco, skiffle, glam-rock and cut-price Xenomania cyberpop. One could conclude that the reason bands rip off Felt and not Go-Kart Mozart is because most bands lack imagination.

Sadly, excellent though it is, On The Hot Dog Streets is not the album that will lead to Lawrence travelling by private jet between sold-out stadium shows, but given the momentum behind him and the opportunity presented, no one is going to be disappointed.
Piers Martin

Q&A
Lawrence
Thanks to the film, this album is enjoying the biggest push out of all your records.
I’m really happy because I believe in spending money on promotion. I’ve never spent money on promotion, but I love that aspect of the business where you can spend lots of money and buy adverts and be on billboards, like The Doors’ first album on Sunset Boulevard. I love all things like that and I’ve never had the chance, but luckliy for me we’ve got this big momentum going and we haven’t spent a penny.

Any lyrics you’re particularly happy with?
Lyrically it’s probably my best work, there’s not a bad line on there. Mind you, I say that about every record I make. Hopefully every tune is a pop classic. Every song is like the most pop anything could be – the poppermost.

There’s an entertaining Go-Kart Mozart miscellany on the innersleeve.
I’ve invented a record label of the mind: West Midlands Records is a record label that exists in your head. Everything on the cover is part of this West Midlands world that I’ve invented and I want everyone to join in and be part of it. We can all live in this perfect world where there’s this one label and all the things surrounding it, all the influences and books and records and everything, they’re all in this perfect world, untouched by reality.