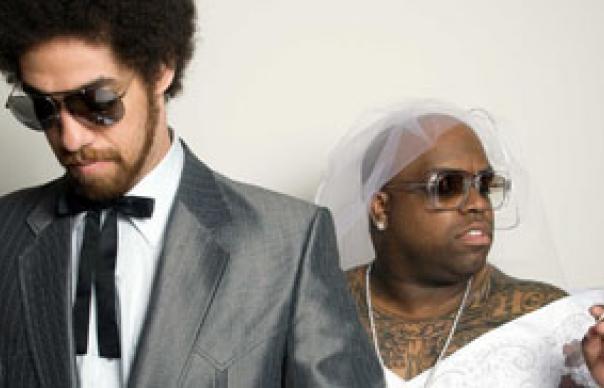 Brian “Danger Mouse” Burton and Thomas “Cee-Lo” Callaway have been promiscuous collaborators since the history-making download chart-topper “Crazy” earned them overnight stardom two years back. Their 2006 debut St Elsewhere was a pretty solid collection, but a little overshadowed by the anthem that went on to become that year’s biggest-selling single. The Odd Couple is a much stronger album, with almost every track sounding like a potential hit.

Gnarls Barkley thrive in the space between Burton’s art-pop futurism and Callaway’s gospel-blues populism. The producer, an Anglophile New Yorker who has mashed up everyone from The Beatles to Gorillaz, fills the sonic canvas with arch references and electro-noise asides. The singer, an Atlanta-raised soul shouter and hip-hopper with a sideline penning polished chart-pop for the likes of Pussycat Dolls, provides soaring emotions and a warm, guttural voice.

The Odd Couple is stacked with tunes that manage to sound like funky church sermons and cool avant-pop experiments simultaneously. Several tracks, from the deceptively jaunty fuzz-pop of “Charity Case” to the bouncy retro-strum of “Surprise”, call to mind OutKast’s knowing, nostalgic “Hey Ya” taken to the next level.

With their penchant for pop hooks and fancy dress, Gnarls never forget their mission is to entertain. But there is darkness here, too, an imploring tone in Calloway’s voice that reaches right back to the blues. The dissonant, oppressive, psycho-voiced slow jam “Would Be Killer” is nocturnal noir; “Who’s Gonna Save My Soul” an exquisite gospel confessional.

Most of these tracks combine a seductive, upbeat surface with unsettling sonic textures beneath. It’s a dream-team formula: imagine Prince jamming with Radiohead. The result is a milestone in modern psychedelic soul.

UNCUT: You were semi-underground when you made St Elsewhere, but you recorded The Odd Couple as pop stars…

DANGER MOUSE: I wouldn’t say we went into it as pop stars, but I know what you mean. We weren’t really that deliberate about St Elsewhere, and it was kind of the same for this record. We just wanted to make sure we really liked it.

There seem to be many more vintage soul influences this time…

Our whole thing is more about the spirit of it, the feeling, than anything else. Psychedelic music, we draw a lot from that – music back then drew from a lot of different places, it just did it really naturally.

Are you the brains and Cee-Lo the heart?

We definitely complement each other. Whether it’s heart or brain or whatever, if he finds something in the music, it will all make sense.