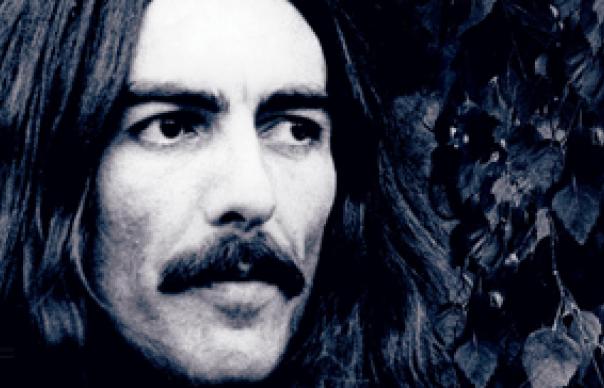 When I was a teenager in the wilds of Devon, running around covered in woad and screaming at cows, I bought the greatest rock book ever written – Roy Carr and Tony Tyler’s The Beatles: An Illustrated Record. It was, and is, a fantastic guide to The Beatles’ recordings together and separately, and its brilliance also lay in its opinionated text. Carr and, particularly, the late Tyler were not only full of praise for the likes of Revolver at a time when Pepper was ramped to a ’ 70s critical high, but they could also be splenetic about Paul McCartney’s early ’70s domestica, John Lennon’s experimental moods, Ringo Starr’s genial anonypop and – particularly “and” – George Harrison’s increasingly duff 1970s output. From enormo triple set to religious finger-pointing to lacklustre sessioneered pop rock, Harrison’s work was so harshly judged by these two (still) journalistic heroes of mine that I spent my teens and my twenties avoiding George’s work in favour of a lot of Wings and Ringo. And I felt smugly justified in this; after all, this is the man who wrote a Christmas song called “Ding Dong”.

Now I am old and both Tony Tyler and George Harrison are gone and there is no-one to guide me but my barnacled conscience. And cautiously I have bought George’s solo records, and found them – well, by no means that bad. From the epic wallop of All Things Must Pass to the Maharishi-a-gogo of Living In The Material World, via some highly variable and (if the late film producer Don Simpson is to be believed) cocaine-fuelled mid-’70s albums, to the calm pop resurgence of Harrison’s 1980s work and his final testament, Brainwashed, George’s work stands up well.

There are certain threads – unlike Lennon, who once claimed “I don’t believe in Buddha/ I don’t believe in Beatles” – Harrison not only had a religious No 1 (the classic Chiffons tune, “My Sweet Lord”) but also back-referenced The Beatles at least four times with “Here Comes The Moon”, “This Guitar Can’t Keep From Crying”, “All Those Years Ago”, and the lovely “When We Was Fab” (and he even back-referenced himself with the bitterly droll “This Song”, a single about the “My Sweet Lord” court case). There are those minor chord melodies, the sardonic vocals, and the later, Beatle- and Wilbury-infecting belief that Jeff Lynne’s drum machine was a universal cure-all, tish boom thud.

And there was a uniquely modest but iron self-confidence. True, he had albums rejected by record companies, he lost court actions, he had to endure being labelled the third-best Beatle, and his last years brought unexpected and awful pain, but Harrison always had both the dry wit and ability to see things with the kind of clarity that the much louder Lennon is always given more credit for. You hear it on this compilation in the unusually upbeat “Blow Away” (memorably pastiched by John in the caustic “Happy Rishikesh Song”), the mordant “Cheer Down”, and in the song The Beatles were fools to turn down, the great “All Things Must Pass”. There are Beatles songs here, but from the Bangla Desh concert, the one that invented Live Aid and that Paul and John forgot to attend.

And there’s that musical thread again: Harrison never had the zest for stylistic reinvention that all three of his exes had (even Ringo could go T.Rex or C&W when he felt like it), but there’s a continuity from the first recordings here right up to Brainwashed tracks like “Marwa Blues” and “Rising Sun”. You can, and possibly will, put this CD on and play it from start to finish and not ever think, blimey, that sounds a bit “of its time”.

This is a very decent compilation. It’s not the Beatley makeweight of his first Best Of, and while it lacks some of my favourite singles (“Faster”, for example, or Harrison’s lovely warble through “True Love”) it also carefully omits some of the duffers of Saint George, like the oh my God-awful cover of “Bye Bye Love” which references Eric Clapton’s getting off with George’s first wife Patti (and anybody wanting, for example, to hear “His Name Is ‘Legs’”, a tribute to “Legs” Larry Smith from the Bonzo Dog Doo Dah Band which features “Legs” Larry Smith on, er, legs, can still hear it, for 99p, on any second-hand shop copy of the ragingly dull Extra Texture).

Let It Roll it is a proper career retrospective (it even collects some good songs recorded for those Buddhist propaganda movies Lethal Weapon II and Porky’s Revenge) and a toe in the water for anyone who, like me all those years ago (sorry) wonders just what George Harrison’s music might sound like. Despite the warnings of Carr and Tyler, I find I like this album and so, I think, will lots of people.