Zach Braff writes, directs and stars in a romantic comedy about an actor who returns home to New Jersey. 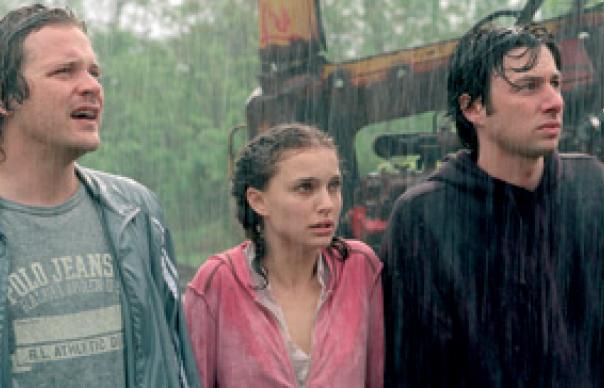 It’s been some time since a supposed romantic comedy invited you to open your heart to “the joy and pain of the infinite abyss that is life”. Garden State is an introspective, melancholy piece of slacker existentialism, which rips apart occasionally to reveal belly laughs and tiny miracles. Its forebears are The Graduate and the late Ted Demme’s Beautiful Girls. Braff, as writer, director and star, takes almost absurd risks both with his persona (you couldn’t conceive of a lead character further away from his JD in the acidic, breakneck hospital sitcom Scrubs) and with his concept: the people in his film start off jaded, and pick it up hesitantly. And the big kiss, the big moment, comes as the lovers stand in a rainstorm by a big wooden ark. It pays off because there are many prior scenes of quietly humorous reserve, where he could bring on the marching band, but doesn’t. It’s clear throughout that he’s learned understatement from the masters. He has it so down that when Simon and Garfunkel’s “The Only Living Boy In New York City” strides in, it sounds like the greatest song you ever heard.

Braff – dazed, spaced out, too numb to be miserable – plays Andrew Largeman, a lithium-guzzler since his domineering father (Holm) prescribed it. His mother’s tragic death sparks a break from the medication, to see what happens. Gradually, slowly, something does. Returning from LA where he’s a F-list actor and part-time waiter (autobiographical much, Zach?), Largeman visits his New Jersey home town for the first time in years. He hangs out, swimming and playing spin-the-bottle with old, stoned friends. “Wanna party? After we bury your mom?” they suggest tactfully. “I get benefits,” says one who’s now a cop, “If I get shot, I’m rich.” Mark (Sarsgaard) is a gravedigger, who hates the fact that his mom is dating a friend of his who’s fluent in Klingon. This friend dresses up as a mediaeval knight as part of his job at a fast food chain. “I’m only 26,” Mark sighs, “I’m not in any rush. What’s your rush for?” For this town, that constitutes a rallying cry.

Then Andrew, or “Large”, meets Sam (Portman), a girl of spontaneity, colour, hope. She has a tendency to tell white lies, some less white than others. She’s epileptic, a former ice-skater. She likes him. She even recognises him from TV. “Are you really retarded? No? Great job – I thought you were.” She urges him to do unique, memorable things, however small. There’s no denying that Portman’s playing practically the same role and serving the same narrative function here as she did in Beautiful Girls, only a few years on. A little tighter around the eyes. Large, though, is more anaesthetised than Timothy Hutton’s character was there: a more suitable case for her treatment. While young love blooms, old family skeletons finally drop from closets as Large and his father confront each other over the past. But not with a blazing King Lear row: that’s not this film’s style. Rather, they communicate, just. Garden State is wonderfully insightful and believable.

It has its themes and motifs. Everyone’s self-medicating in some way, it suggests. Water is everywhere, from dripping taps to floods. Animals play a part: Sam has her own pet cemetery. “Goodbye Jelly,” she says, burying a hamster. “I hope you liked me.” Everyone, beneath surface apathy, is asking questions, whether they’re trivial ones regarding pop culture (Mark’s collecting Desert Storm trading cards, which he figures will provide his pension fund; Sam asserts that a song can change your life) or big ones about death and wasted years. It’s a film which could easily topple into pretentiousness, but Braff and the performers carry it along with just the right lightness of touch. It floats.

Its indie credentials further promoted by accompaniment from The Shins, Thievery Corporation, Nick Drake and others, Garden State is about a lost young man finding, if not exactly paradise, at least a wake-up call he needed but didn’t know he wanted. If not home, at least a heart. It’s a warm, sad smile; it’s subtly, softly, full of earthly delights.