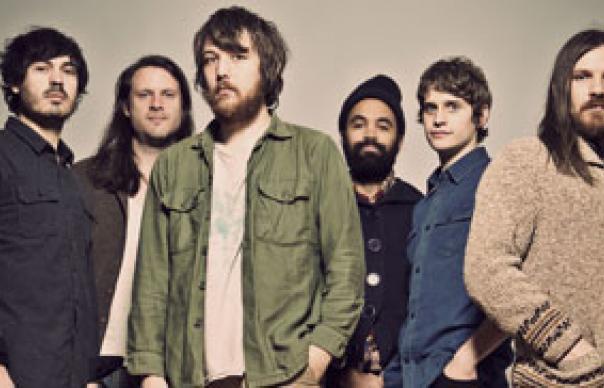 In a note written for journalists, Robin Pecknold includes a useful list of some of the musical influences at play on Fleet Foxes’ second album. Many will be familiar to anyone who appreciated the sunlit harmonies of the group’s 2008 debut: not least SMiLE-era Brian Wilson, The Byrds, Crosby, Stills And Nash, Van Morrison, Bob Dylan and Neil Young. Some are less mainstream, but provide an interesting insight into the breadth of Fleet Foxes’ ambition: so, let’s hear it for Peter, Paul & Mary, folk-song collector and balladeer John Jacob Niles, Judee Sill, Ennio Morricone, The Zombies, The Electric Prunes and Roy Harper.

You can hear them all, sometimes all at once, if you listen closely to Helplessness Blues. The surf-speckled gospel harmonies that introduce “Lorelai” are as sweet and clear as any sung by The Beach Boys. The cinematic scope of the pretty folk instrumental “The Cascades” recalls Morricone, even if Fleet Foxes never quite get into the realm of the Spaghetti Western (it sounds more like alfalfa in the breeze than spurs on desert dirt). Roy Harper’s influence, Pecknold has acknowledged, can be detected in the layered vocals at the start of “The Plains/Bitter Dancer”.

Pecknold doesn’t mention Joy Division, so I will, because Helplessness Blues is as passionately desolate as anything on Closer, the record which documented Ian Curtis’ romantic guilt and existential confusion. Ridiculous? Well, plainly, Joy Division were industrial and gothic in a way that Fleet Foxes are not: like Brian Wilson, the Seattle-band tend to spray ultra-violet light onto dark thoughts – but consider the opener, “Montezuma”, in which Pecknold appears to be mourning the death of the person he used to be, and upbraiding himself for being so self-centred. The song is apparently deeply personal, and its underlying mood is one of profound dislocation and loneliness. It doesn’t sound deathly, of course. It’s glorious, but beneath the tidal swells and eddies which flush around the melody, the tenor is funereal. Or take “Battery Kinzie”, which seems to be a transcription of a nightmare; a kind of blues set to a Simon & Garfunkel harmony “I woke up a dying man/Without a chance,” Pecknold avers at the start, and things don’t brighten after that.

The singer has his reasons, of course. As he told Uncut last month, the three-year gap between Fleet Foxes’ first and second albums was not planned. The group were overwhelmed by their success, and the pace of events meant that work on new material kept getting pushed back. More importantly, Pecknold found his artistic perfectionism interfering with his everyday life, so that the process of dreaming the record, writing it, and doing justice to his ambitions for it, pushed everything else aside. He suffered ill health, sacrificed a relationship, and – this part is half-speculation – found his muse diverted.

Hence, Helplessness Blues; the title is a self-mocking joke, but the album really is dominated by Pecknold’s weighing of his emotional baggage. This is especially true of the title track, which begins like a Simon & Garfunkel pop song before turning stormy. “What’s my name, what’s my station?” Pecknold sings, “Oh just tell me what I should do…” On the page, the words scroll like a break-up song, as the singer admits to his inability to control his life, even when he can sense it is drifting in the wrong direction. “And I don’t know who to believe/I’ll get back to you someday/Soon you will see…” But the singing elevates it to something universal, as he yearns for a cause – any cause, almost – to believe in, if only because it would save him the bother of fixating on his own problems. “My Generation” it isn’t, but you sense that Pecknold would rather eat his own tongue than pen a generational anthem. Fleet Foxes are always described as baroque, which usually means someone’s playing a glockenspiel, but on Helplessness Blues the band really do seem to be intent on expanding the geography of the pop song. Sometimes the tunes are only held together by J Tillman’s ominous tom-toms.

Two songs (“The Plains/Bitter Dancer” and “The Shrine/An Argument”) are acknowledged as collages. On “The Plains/Bitter Dancer” the mood does tip into heavy metal portentousness, with lyrics which seem to suggest a kind of Satanic reckoning. But “The Shrine/An Argument” is an epic beauty, a psychedelic dream which starts out all summery and sweet, before dissolving into doubt and tempestuousness and – something of a shock this – a free jazz wig-out.

There is sweetness, too. Pecknold began the writing process by penning songs he could sing on his own after being invited to support Joanna Newsom. His idea then was to embrace simplicity. Some of that remains. “Blue Spotted Tail” is a sweet folk song, bordering on naivety. It’s just a man with a guitar, humming to himself; a nursery rhyme, almost. And “Lorelai” is a painful romantic piece which starts prettily (“So, guess I got old”) before spiralling into choral harmonies. Nothing stays simple for long.

Where does that leave us? Well in Helplessness Blues, Robin Pecknold is unduly harsh on himself. It is perhaps a problem peculiar to the folk idiom when the anger in your protest songs is directed at the mirror. But there’s something more persistent about the unease Pecknold is exploring here. His initial impulse may have been a rock singer’s gripe about the troubles that arrive when your dreams come true, but he has remoulded this very particular strain of self-absorption into something universal and timeless.

In the coda to the song, “Helplessness Blues”, Pecknold makes a show of putting his troubles aside, as he imagines an ideal life. He’ll work in an orchard, he suggests, and his girl will wait tables. What he doesn’t add is the bit about living happily ever after. Because, for all that he is a romantic, Robin Pecknold is a realist, clinging to a dream – and it is a beautiful dream.
Alastair McKay