The withdrawal years: Slowhand leaves the blues behind on eight vinyl albums in a box 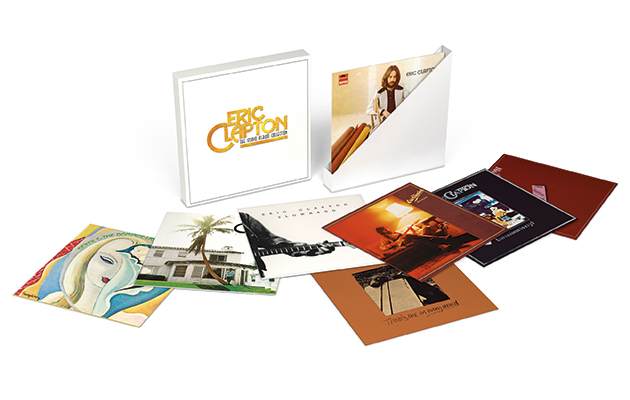 Pick any one of the four sides of Layla & Other Assorted Love Songs, the 1970 double-album by Derek & The Dominos, and you’ll hear a 25-year-old Eric Clapton wracked with anguish, down on his knees and baring his soul. A howl of unrequited love for Pattie Boyd, the wife of his friend George Harrison, Layla remains one of Clapton’s greatest works. It’s a monolith of blues metaphors, real-time agonies and scorching guitar solos. His way of coping with the pain it unleashed was to retreat to Hurtwood Edge, his villa in Surrey, where he took heroin for two years and never left the house.

It’s been suggested that Clapton got so close to the essence of the blues on Layla that it did something terminal to his muse. Certainly, his guitar and voice were much changed – more restrained, not so fearless – when he re-emerged in a Miami studio in 1974. If there’s a word that sums up this boxset (a vinyl-only collection of eight albums from 1970 to 1981), it’s ‘withdrawal’. Withdrawal from heroin. Withdrawal into an alcoholic haze. But withdrawal, too, from the burden and responsibility of being rock’s foremost living guitarist, so that the former Cream hero was seen, by the mid-’70s, to mutate into a quite different beast: a leisurely, laidback, south-of-England facsimile of JJ Cale. Watch the first 20 minutes of Clapton’s 1977 Old Grey Whistle Test special, where he’s strumming an acoustic while his American bandmate George Terry takes all the solos, and witness a man once hailed as God reducing himself to the role of a minor apostle.

All the same, more than one of these eight albums sold millions (for example, Slowhand in 1977), and between them they featured some of Clapton’s biggest international hits, including “Layla”, “I Shot The Sheriff” and “Lay Down Sally”. The producers he worked with (Tom Dowd, Glyn Johns, Rob Fraboni) operated at the top end of AOR sophistication, while the musicians in his band – bassist Carl Radle, keyboardist Dick Sims and drummer Jamie Oldaker – were among the best of the American ‘feel’ players that captivated stars like Rod Stewart, Steve Winwood and The Rolling Stones in the ’70s.

Radle, Sims and Oldaker were masters of a gentle, rolling, country- and blues-influenced style known as the ‘Tulsa sound’. While Rod Stewart’s ’70s albums with Tom Dowd struggled with a blandness problem, Clapton’s had a Tulsa chemistry and a fleet-footed flexibility, allowing them to explore the sleepy grooves of Cale and the new rhythms of reggae. A song called “High” (on There’s One In Every Crowd, 1975) slips and slides exquisitely, its uneven metre so strange and beguiling that it’s both impossible to dance to and impossible to sit still to. Clapton was leaving his British blues roots far behind.

Cale, a little-known Tulsa songwriter, had been surprised and intrigued when Clapton covered “After Midnight” on his first solo album, 1970’s Eric Clapton. Cale’s inspiration as a straight-arrow minimalist was to hover over Clapton’s ’70s output – even on albums like 461 Ocean Boulevard (1974), where none of his songs were actually performed – and grew stronger, if anything, towards the end of the decade. Not only did Clapton start Slowhand with Cale’s “Cocaine” (and sing “I’ll Make Love To You Anytime” on the 1978 follow-up, Backless), but he appropriated Cale’s whispering, chugging sound for his Top 40 singles “Lay Down Sally” and “Promises”. It was a style popular with radio listeners and fellow musicians alike. Among those who emulated Clapton emulating Cale was Mark Knopfler, the singer and leader of the emerging Dire Straits.

Other Clapton followers, however, were frustrated by the absence of drama and risk in his post-Layla music. No Reason To Cry (1976), depending on how one looked at it, was either a stellar symposium of rock socialites – Bob Dylan, Ronnie Wood, Robbie Robertson and The Band – or a study in underachievement by a clique of self-satisfied drunks. Dylan, rhyming “sign language” with “eating a sandwich”, isn’t the only one who sounds keen to get the recording session finished and the party started.

It’s a depressing thought, listening to this boxset, that Clapton was sometimes merely making music that sounded half-decent to him when he was pissed. No Reason To Cry isn’t the sole offender, but as we listen to Clapton bizarrely impersonating The Band’s Richard Manuel on “Black Summer Rain”, we’re bound to wonder if one of Britain’s most illustrious guitarists has drunk so much that he’s forgotten who he is.

The ’70s was a decade when Clapton coveted, mourned and finally wooed the girl. But look what happened as a result. Having immortalised Pattie Boyd in “Layla”, he sentimentalised her in “Wonderful Tonight”. To go from “Hellhound On My Trail” to “The Lady In Red” would not be every bluesman’s idea of musical progression. Then again, unlike Robert Johnson, Clapton survived to tell the tale.

EXTRAS 4/10: All remastered, these LPs come packaged in a box.