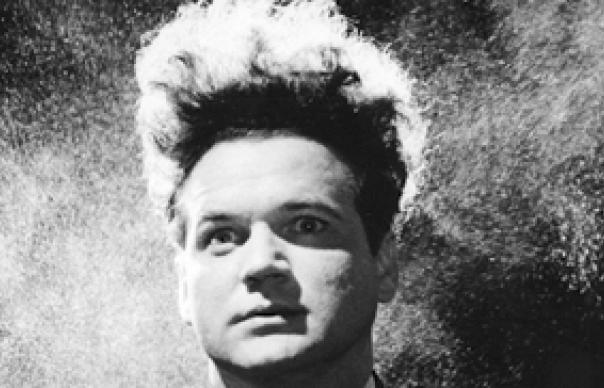 The favourite film of Charles Bukowski, who claimed to hate films; the movie Kubrick screened for cast and crew of The Shining “to put them in the mood”; the film that inspired Tom Waits to pen Frank’s Wild Years –Eraserhead had an almost unholy influence upon the late-20th-century countercultural landscape.

For this DVD release, Lynch himself has painstakingly cleaned, restored and re-mastered the film frame by frame. At the time, it took him five years to make, as a film student work, on no budget. There was one 18-month gap, of which lead Jack Nance said, “I got up and went through the door in one scene, and it was a year and a half before I walked out the other side.” Nance is to be congratulated on keeping his hair so high for so long.
The “story” of Eraserhead is difficult to compress, being a committed exercise in the most virulent strains of surrealism. Narrative (as in Blue Velvet and Mulholland Drive) isn’t as important as the effect on the senses and the subconscious, the pull on the gut and nerves.

Jumpy Henry Spencer (Nance) lives in an urban dystopia of shadows and smoke. Everything bewilders him. In his seedy apartment he dreams of sex and the girl he believes lives in his radiators. When he visits Mary, who may or not be his ex-girlfriend, he endures a frightful family dinner before Mary tells him they have a baby. It’s deformed, hideous, foetus-like. Mary dumps it with Henry, who doesn’t enjoy the subsequent daily responsibility. He’s trapped. In a dream, he sees himself decapitated, his head to be used as an eraser. Waking, he realises he must un-swaddle and kill the wretched baby. “In Heaven,” the Lady In The Radiator reassures him (if not us), “everything is fine.”

It seems reductive to say that Lynch was tussling with becoming a new father, though he has admitted his home life and its clash with his artistic aspirations was a factor. Eraserhead resonates with many more themes: its preoccupation with sex, castration and the birth-death cycle are drawn from Buñuel (especially Un Chien Andalou). The disorientating design and Frederick Elmes’ camera-work owe much to the giants of German Expressionism, these elements enhanced by the hissing, crackling sound-bed, the film’s unique internal logic. And an atmosphere that haunts for longer than is comfortable. Its shadow hangs over every Lynch film since.

Six Lynch shorts are also released (some for the first time on DVD in the UK). Alongside 1988’s French TV episode The Cowboy And The Frenchman and 1995’s Lumière Et Compagnie, his four earliest experiments are gripping, seen either as the juvenilia of a titan or as threads which lead to the ghoulish greatness of Eraserhead and beyond. Six Figures Getting Sick (1967) and The Alphabet (1968) reveal a painter working out how to transfer his gifts as a visual artist to film. By The Grandmother (1970) and The Amputee (1974), the shock-horror and black comedy are seeping ominously through. For the former, Lynch painted the interior of his house black, used neighbours and relatives as actors, and presented a ghastly 34-minute family scenario wherein a boy wets the bed, his father rubs his face in it, his mother tries to seduce him and his grandma – who he witnesses growing from a seed – dies (twice) while his parents laugh at him. When they saw the film, Lynch reported, his own parents “were very upset, as they didn’t know where it came from.”

Its legacy of real-imaginary confusion upon Eraserhead is undeniable, as is that of The Amputee. Only five minutes long, it’s sensationally appalling, as a woman with both legs lopped off at the knees reads a letter aloud (very Beckett). A male nurse “treats” her amid much bloodletting and bandaging. While Lynch’s obsession with physical abnormality can be gruelling, it serves to make you ponder Hollywood’s presentation of physical “perfection” as the norm. “Just beneath the surface,” Lynch has said, “there’s another world. I knew it as a kid. It was just a feeling.” That feeling led to these savage, spine-tingling works, and a cult that continues to slither onward.

EXTRAS: 3* Eraserhead – Lynch interview about Making Of; The Short Films – intro to each by Lynch.