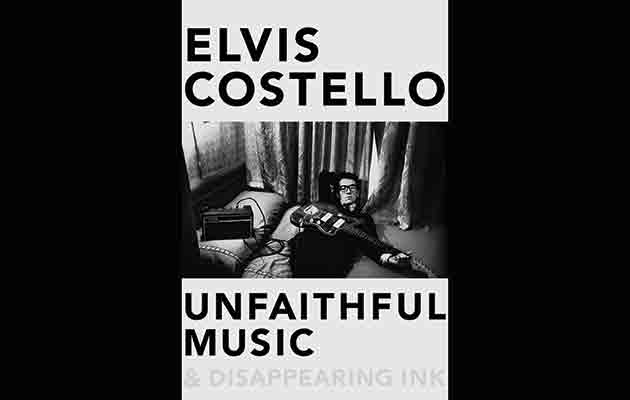 Elvis Costello was always a gas to interview because he had opinions about everything, all of them worth listening to. He’d had an initially spiky relationship with the press, with whom he was often at best terse, and otherwise a lot worse. But by 1989 when I interviewed him in Dublin, just after Spike came out, there was no shutting him up, or any want to. He was a wonderful raconteur. Stories about Bob Dylan, Springsteen, Jerry Lee Lewis, Roy Orbison, Bowie, Paul McCartney, Nick Lowe and more poured out of him as fast as the drinks that fuelled us through those four or five hours kept arriving from the hotel bar.

A lot of them are handsomely repeated in Unfaithful Music & Disappearing Ink, a vast memoir that across 600 pages looks back at his life and career with candour, humour and a welcome lack of rancour. There are moments of pique, mostly to do with his not selling records any more, although this has been the case for years. But mostly the book is generous, and you could heat a village with the warmth of his writing about his family, especially his father, the raffish entertainer Ross MacManus, a ladies’ man in whose philandering Costello sees an anticipation of his own multiple infidelities, which he doesn’t half go on about.

Abandoning linear narrative like a more garrulous version of Dylan’s Chronicles, Unfaithful Music continually intercuts scenes from a childhood in London and Liverpool with The Attractions in the studio. There’s a hilarious account of his time at the Elizabeth Arden factory in Acton, even funnier accounts of his first forays into folk clubs. Then he’s a small boy listening to acetates of Beatles songs with his father, who’d been sent them to learn for later performance with the popular Joe Loss Orchestra. Now he’s struggling to get his music heard, now recalling idyllic Merseyside summers before a series of vivid accounts of nightmarish American tours, a blur of girls, gigs and drugs.

Music holds the disparate narrative strands together, usually his own songs the link. Discussion of “Another King’s Shilling” and “American Without Tears” leads into a fabulous family and history, mostly centred on his grandfather Pat, a bandsman on transatlantic liners between Liverpool and New York. “The Birds Will Still Be Singing”, that gorgeous lament from The Juliet Letters, frames a moving account of his father’s death from Parkinson’s induced dementia. Costello doesn’t flinch from much here. Even Bebe Buell gets a tense mention. Most painful of all, he has to confront again the notorious drunken row in a Midwest motel with Stephen Stills and Bonnie Bramlett (whose name he can’t bring himself to mention) when to provoke them he said such despicable things about Ray Charles and James Brown a vindictive American press branded him a racist, an incident that still haunts him.

You can buy Costello’s tome from Amazon.co.uk by clicking here