Garvey & co’s fifth LP is a work of hymnal beauty... 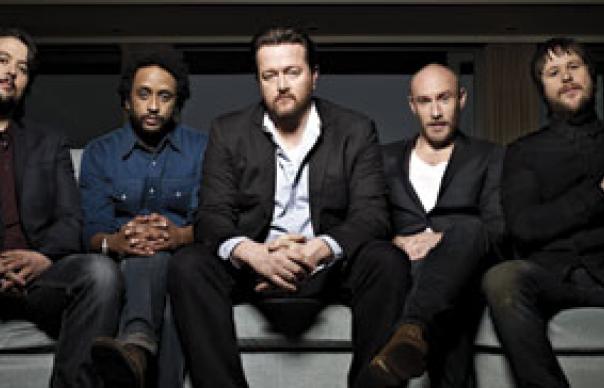 After two decades of making music to mass indifference, as of 2011 Elbow find themselves in a unique position. Their fifth album will be both their highest charting release and their most-eagerly awaited album, and they’ll be touring it in larger venues than they’ve ever played before. A well-deserved Mercury prize triumph in 2008 has elevated them into rock’s premier league, and turned Guy Garvey – keen birdwatcher, unrepentant Yes fan and the band’s affable frontman – into something of a national treasure.

The band haven’t moved from Manchester. Indeed Garvey’s moved back to his hometown of Bury, just north of the city, and these songs see him reflecting on the past, on childhood, friendship, family and suburbia. “Old friends/You are angels and drunks/You are magi”, he sings on “Dear Friends”, the slow-burning closer. It’s the first Elbow album that doesn’t bear any of the usual reference points cited by observers – Blur, Radiohead, Peter Gabriel – and instead taps into a very different influence at the core of their music. Garvey has talked about his lapsed Catholicism and, like several members of the band, was an altar boy in his youth. He often abandons songs as they sound “too much like hymns”, only once relenting when he wrote the full-on secular hymn “Grace Under Pressure”.

What’s immediately striking about this album is that nearly every track resembles a hymn. Each employs simple chord changes and striking melodies; most move the piano to the foreground, relegating the guitar to soft, minimal noises; most reduce the rhythm track to something gentle and pattering. None of the tracks are about romantic love, all view love in the spiritual sense, in terms of community, fellowship and awe of nature.

This spiritual dimension adds an epic feel to these rather parochial ruminations. “Lippy Kids” is a portrait of Manchester’s ASBO kids, one that explores similar territory to The Smiths’ “Rusholme Ruffians”. But, where Morrissey eyes his subjects with an excited disgust, Garvey paints a softer, “hug-a-hoodie” picture. He mourns that he “never perfected that simian stroll” and elevates his benighted subjects to “freshly painted angels/walking on walls/stealing booze and hour-long hungry kisses”. He urges them to “build a rocket, boys”, conferring a dignity upon them by use of a gentle piano and a luscious orchestral accompaniment. Likewise Davey Graham-ish “Jesus Is A Rochdale Girl” takes an unprepossessing young woman – apparently based on a local friend, around whose house a teenage Garvey and his friends would hang out – and paints her home (“she’s got a house that you can smoke in”) as a spiritual refuge.

It’s also an album steeped in civic pride. Crucially, however, it’s a different Manchester to the usual clichés of rain-sodden streets or dark satanic mills. Theirs is not the city of Joy Division, Bernard Manning (or indeed Freddie And The Dreamers), but the Manchester of the Whitworth and Chetham’s, of Harrison Birtwistle and Anthony Burgess, of the grand Central Library and the Hallé. Indeed, the latter play a role on this record. After collaborating with the Hallé Orchestra at last year’s Manchester International Festival, this album features the Hallé Youth Choir, who add a John Tavener-like intensity to tracks like “The River”. There’s still plenty to appeal to Elbow loyalists. “Open Arms” and “With Love” are anthemic crowdpleasers in the vein of “One Day Like This”. “Neat Little Rows” – with a nod to Echo And The Bunnymen – shows that they haven’t lost their knack for punchy post-punk. “The Night Will Always Win” is a fine ballad with a resemblance to Abba’s “Fandango”. Pride of place, however, goes to opener “The Birds”, a lengthy, symphonic, harmony-laden trip hop groove that’s reprised near the end of the LP when sung by an elderly, anonymous actor, who turns it into a spooky Benjamin Britten aria. In short, it’s a quietly beautiful record: anthemic but not bombastic, introspective yet universal, simply drawn but beautifully coloured in.
John Lewis

Q+A Guy Garvey
The record seems very nostalgic…
I found myself writing about home. I suppose everyone feels that, after childhood, adulthood flies by. Of course I’ve got a side to my nature that’s had a really good party for the last 20 years, but then there’s another side to everyone. One that wants to spend more time reflecting on things rather than running headlong at them. I guess I’m there.

Did you discover new things about yourself?
A lot of the record is about not blaming people. And there are references to not looking at young men as potential murderers but as potential life-savers instead – doctors and scientists. If someone’s on a street corner figuring out how to be a man, it doesn’t mean they’re going to rob you. There’s a fashion in the right-wing press to alienate every age group. You’re not allowed to be young… or old.

Is this reflected in the music itself?
We’re giving the listener credit for knowing our music already. We’re not on a first date with anybody that comes to this record; we’ve allowed ourselves subtlety. The songs are long enough to swim in. And that’s partly down to our confidence growing.
INTERVIEW: ROB HUGHES