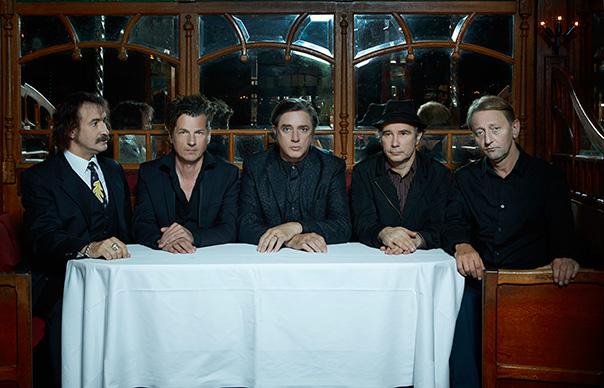 With the introduction of submachine guns, barbed wire jungles, high-explosive shells, massed tank offensives, and chlorine, mustard and phosgene gases, the First World War became the first truly industrial conflict. So as far as musical memorials go, an industrial group seems the perfect outfit to somehow make sense of the mechanised slaughter, not to mention having any hope of matching the sturm und drang of war.

A project commissioned by the Flemish city of Diksmuide, Lament sees Blixa Bargeld and his Berlin cohorts create an eclectic song cycle examining those seismic events from a century ago. The extreme noise quintet have certainly done their research, delving into the archives at Berlin’s Humboldt University to uncover lost songs and texts from the period, imbuing them with all the terrible noise the group customarily conjure up.

The first third of the LP acts as a kind of prelude, with the opening six-minute crescendo, aptly titled “Kriegsmaschinerie”, rising from disturbing creaks to a cacophony of squealing metal. The score used for this piece was a graph, ‘defence budget as a percentage of GDP between 1905 and 1913’ for the countries who would wage the war (here’s a clue: the percentages rise dramatically). Then, after a bastardised version of “God Save The King” performed in English, German and Flemish, we’re down in the trenches. Here, an adaptation of little-known writer Paul Van Den Broeck’s “In De Loopgraaf” with Blixa solemnly intoning the original Flemish words, is accompanied by the hollow knocking of the gruesome ‘barbed-wire harp’, the latest in a long line of percussionist NU Unruh’s infernal, homemade instruments.

The 13-minute “Der 1. Weltkrieg (Percussion Version)” is another early highlight, albeit a mathematical one – every beat counts as one day of the war, with each country represented by a plastic pipe that resonates at a unique note when beaten. Blixa announces each state’s entry into the conflict, setting off a flurry of tuned pipes, while female voices dryly recite the names of notable battles or campaigns. It’s a surprisingly moving piece with its own strange, gripping momentum – “Champagne… Polygon Wood… The Kingdom Of Bulgaria…”

Even without knowledge of Neubauten’s methods, though, Lament is a startling, eclectic listen. Every reverbed, metallic squeal or bone-cracking thud is intensely visual; but rather than, say, an elegant landscape of poppies, Lament brings to mind something rather more like Paul Nash’s wryly titled painting, We Are Making A New World, a barren waste of mud, wire, craters and splintered stumps.

There is still beauty to be found among the destruction, though – the luscious, velvet-dark “How Did I Die” is worth every second of its seven minutes, as Bargeld enigmatically speaks of death in the trenches over melancholic piano, strings and softly ticking percussion. Other tracks utilise the collage techniques and sampling that the group have pursued since at least 1983’s Zeichnungen Des Patienten OT. The third part of the title suite, the string-led “Pater Pecavi”, sees crackling voices, taken from wax-cylinder recordings of German prisoners of war telling the story of The Prodigal Son, fade in and out among a thicket of funereal strings. There are also two covers of songs originally by the band of the 369th Infantry Regiment – better known as the Harlem Hellfighters, the first African-American regiment sent abroad to fight – with fragments of the original recordings interlaced.

Bargeld insists Lament shouldn’t be seen as a proper Neubauten album, and he’s right; it’s admittedly hard to identify when any listener would find occasion to play it often – too uncomfortable to relax to, too disturbing for dinner parties, too dynamically varied for the car, and, at 77 minutes, a little too long. But then, the record is a document of the group’s performance for Diksmuide, after all, more of an art project than anything to do with rock’n’roll. It’s not too much of a stretch to imagine its best bits comprising part of an experimental Radio 4 play. Not everything works – surely, no-one would have missed “Der Beginn Des Weltkrieges 1914”, a six-minute spoken-word piece in German, from 1926, which tells the story of the war complete with animal impressions, or a version of Marlene Dietrich’s cover of Pete Seeger’s “Where Have All The Flowers Gone”, which is interesting but adds little.

At its peak, though, Lament is a fittingly noisy reminder of the brutality and pointlessness of the First World War. Yet it’s also a potent warning, a look at what happens when industrialised states are propelled unwittingly into conflict through some terrible collective inertia. “War is not something that appears and disappears,” Blixa Bargeld told a Danish TV show recently. “War is something that is always there… It sometimes moves.” As the climate today turns ever frostier in Eastern Europe, Lament is a warning well worth heeding.
Tom Pinnock