Low-key Kiwi indie-com, with 'cult' splashed all over it 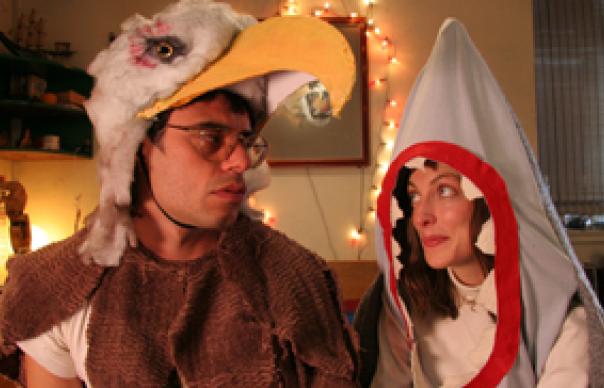 The Kiwi Napoleon Dynamite, anyone? Waititi’s film is a similar celebration of all things geek, focussing on two Wellington misfits: stringy-haired beanpole Lily (Horsley), who works in a Meaty Boy burger store and harbours a crush on Jarrod (Clement), a computer nerd with an insufferably high opinion of himself. She turns up at his birthday party – come as your favourite animal – dressed as a shark. He reckons his eagle outfit trumps hers, but is impressed. They play computer games – he wins. While Lily subsequently pursues a romantic agenda with Jarrod, he engages in a revenge mission against his former high school bully.

While the zaniness zinging around the first two thirds is clearly indebted to Napoleon Dynamite, Eagle Vs Shark becomes far more sympathetic in its treatment of its two leads as it develops, Waititi coaxing some kind of emotional truth out from beneath the self-conscious whackiness. The final third – where Jarrod takes Lily back to his hometown for a showdown with his nemesis – puts Jarrod’s arrogance in some kind of context, but those of you who want your laughs played dumb and fast might find the change of tone a little jarring.