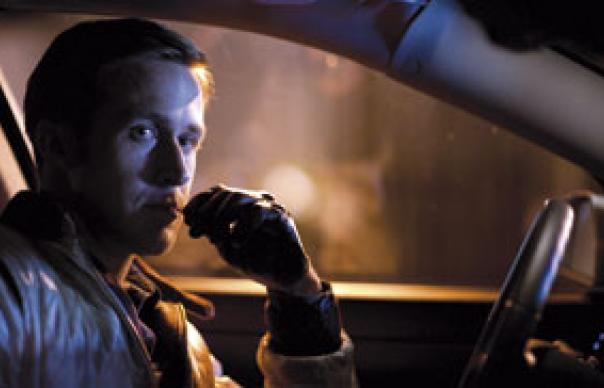 The Driver – no name, just The Driver (Ryan Gosling) – is a Hollywood stuntman who moonlights as a getaway driver, offering to LA criminals a five-minute window of his time, and no more. “I drive. That’s what I do. That’s all I do,” he says. At home, though, The Driver’s solitary existence is tested by the appearance of his pretty new neighbour Irene (Carey Mulligan), whose husband is in jail and whose young son sorely needs a father figure. Matters are complicated, of course, when Irene’s husband, Standard (Oscar Isaac), is given early release from prison. Protection money owed from his time inside is now due, and Standard needs The Driver’s getaway skills for one last job, to pull together the funds needed to pay off the mobsters on his tail and provide for his family. What could possibly go wrong? “Did you have any idea there’d be a second car…?”

Danish director Nicolas Winding Refn came to prominence with the Pusher trilogy, made between 1996 and 2005, and set in Copenhagen’s violent underworld. He visited our own criminal underworld for Bronson – his visceral 2008 biopic of Charles Bronson, Britain’s long-serving prisoner in solitary confinement – and now Winding Refn finds himself immersed in yet another crime milieu. In fact, Drive is a welcome throwback to a sub-genre of stripped-down, existential action movies familiar from the late ’70s and early ’80s. The title alone echoes Walter Hill’s 1978 neo-noir movie, The Driver, which similarly featured a laconic getaway driver as its protagonist. The film’s opening sequence, meanwhile, showing LA at night and soundtracked by a propulsive synth line, places Drive firmly in territory memorably occupied in the past by John Carpenter, or Michael Mann in the earliest days of his career.

Gosling gives the film its cool, starry, Steve McQueen-style centre; his character is pared right back to the essentials, defined solely by his actions (Walter Hill originally wrote The Driver with McQueen in mind). There is a double-cross, naturally, at which point The Driver becomes part hero, part lethal avenger, intent on protecting Irene and her child from harm. There are stabbings, forkings, stompings, a hammering and an explosive car chase. Littering its oily alleyways are great turns from Ron Perlman, Bryan Cranston, Mad Men’s Christina Hendricks and, most brilliant of all, Albert Brooks, as a gangster. Terrific, pulpy stuff.
Damon Wise