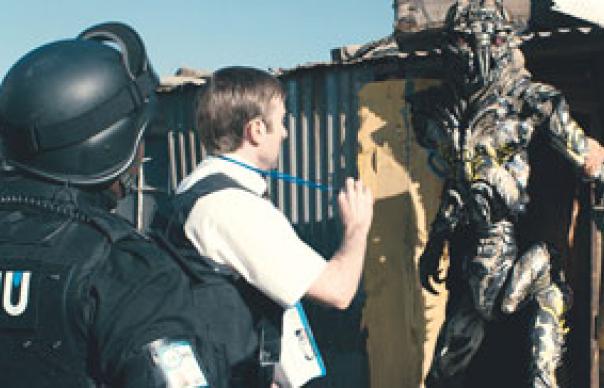 
As Cloverfield acknowledged last year, the aliens-on-Earth movie is in need of a fresh twist. It might be enough, you may think, for co-writer and director to Neill Blomkamp to base District 9 in his native South Africa, away from the traditional Western locations for First Contact.

But in fact, the Johannesburg setting also serves to RAMP UP Blomkamp’s subtext. As the film opens, in the present day, we learn via documentary clips and news footage that aliens came to Earth 20 years ago and have since then been interred in a containment camp.

Blomkamp’s wry satirical parallels to apartheid work pretty well here (as does the idea that not all alien races are hell-bent on the destruction of humankind). Equally smart is his decision to set up leading man Wikus (Sharlto Copley) as the initially unsympathetic agent for a large multi-national charged with relocating the aliens to another site.

But the originality of the first hour is squandered as Blomkamp unmasks corporate villainy and resorts to an increasingly programmatic series of action set-pieces that pit Wikus and a friendly alien against the multi-national’s private army.