Brooklyn brainiacs go back to basics? Not quite... 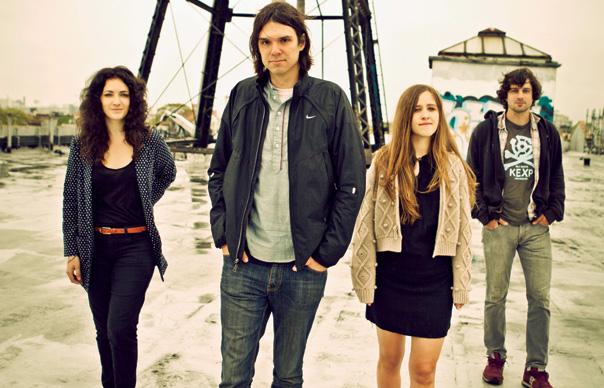 Brooklyn brainiacs go back to basics? Not quite…

For all their grand designs – the glitch operas, the whalesong cycles, the earnest attempts, as bandleader Dave Longstreth puts it, to “construct some sort of dialogue between West African guitar music and American hardcore, or between mid-2000s Timbaland and Mahlerian wind writing” – you always wondered what Dirty Projectors would sound like once they shed the conceptual baggage and went back to basics.

And here’s the answer, kind of. For six months last year, Longstreth sequestered himself away in an abandoned house in rural Delaware County to write the songs for what would become the sixth Dirty Projectors album. Making the time-honoured pilgrimage upstate seems to have mellowed his approach. Previously, his music has rejected, even mocked the idea of heritage rock; on Swing Lo Magellan you can hear whole clumps of Townsend riffage and McCartney melody floating to the surface.

That doesn’t mean it’s an easy listen. The album remains magnificently wordy – “this next one’s a little ditty called ‘Impregnable Question’!” – and Longstreth’s wriggling vocal lines and counter-intuitive, clip-clopping rhythms still require some getting used to. But once you’ve tuned into the DPs’ frequency, you’re rewarded with a relentlessly novel album that’s generous with its wisdom and often exhilarating in its execution.

When those blinding harmonies burst out of nowhere, you’re reminded that this band always set out to excite rather than confound or confuse. “Dance For You” is particularly irresistible, Longstreth singing gaily of boogieing down “gargoyle streets” hoping to “feel the breath of a force I cannot explain”. Amber Coffman’s lead vocal turn on “The Socialities” isn’t quite as arresting as her Aaliyah tribute “Stillness Is The Move”, but the understated arrangement highlights a ravishing melody.

Overall, Swing Lo Magellan is closer in spirit to the choral campfire vibe of David Byrne collaboration “Knotty Pine” than much of predecessor Bitte Orca. Its freshness can be attributed to a ‘first take best take’ recording policy that lends each song a remarkable immediacy. Plenty of bands boast about “leaving in the mistakes”, as if a bit of sloppy guitar work will somehow transform their mediocre din into something raw and vital. But when you hear Dirty Projectors fluff a cue or miss a beat, it genuinely feels as if they’re too wrapped up in the songs to care.

Conversely, the lyrics leave nothing to chance. For the first time, Longstreth’s words offer real value, rather than just verbose decoration – even if his cautionary, quasi-Biblical tales feel like they’re sometimes working at odds with the playful optimism of the music. “Offspring Are Blank” unfolds like a sinister creation myth, in which the “marriage of eagle and snake” leads to “shadows that lengthen from the sky to the ground/ And a silence that can swallow sound”. “Gun Has No Trigger” is a solemn fable about a Philistine getting their comeuppance. Meanwhile, the figure of 16th century circumnavigator Ferdinand Magellan is invoked on the title track as a symbol of our yearning to venture off the map in lives that often feel tediously pre-ordained.

Of course, there’s the ever-present danger that Longstreth’s intellectual swaggering will come across to many as smug and superior. For an album he intended to be more direct and personal, it’s only on the closing track – a gloriously punch-drunk ballad called “Irresponsible Tune” – that he really comes close to opening up. “With our songs, we are outlaws/ With our songs, we’re alone” he notes, glumly acknowledging his outsider status in a “world crooked, fucked up and wrong”. Yet without music, Longstreth concludes, “life is pointless, harsh and long”. For that reason, we should be grateful that he continues to boogie down gargoyle streets to his own strange, alluring, irresponsible tune.
Sam Richards

Q&A
Dave Longstreth
How much did the abandoned house where you wrote and recorded Swing Lo Magellan influence the atmosphere of the record?
I think not terribly much. What was cool about the house is that it was unfinished. Turns out an unfinished room is a pretty nice place to make stuff that doesn’t exist yet. But in general I would not overplay this narrative of the house and the rural upstate. Basically, New York is an amazing place to absorb music and culture and hang out with friends and everything, but I don’t think it’s ever been a good place for writing music – unless it’s a kind of angular, claustrophobic dissonance that you’re after.

Was it quite a new approach for you to start writing individual songs without any kind of grand plan?
It was. When you’re writing a story, like The Getty Address or Mount Wittenberg Orca, the writing is done when the story’s done. This time, it was much more open. It was super-fresh and liberating. It felt like, “I’m going to open this window and just collect these leaves as they blow off the tree.”

Why did you choose not to overdub or redo all the little imperfections?
Perfection is such an over-esteemed virtue right now. I can understand it in the Renaissance or something when it was hard, but lot of music being produced at the moment has got this sort of cheap, digital perfection to it. I felt that showing a little bit of rawness or vulnerability made these songs feel more true to themselves. A lot of the demo elements are part of the finished record. A lot of the vocals are the first time I ever sang these songs.
INTERVIEW: SAN RICHARDS