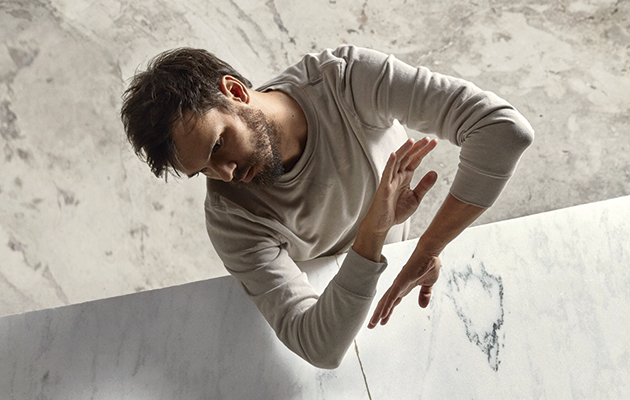 It’s been five years since Swing Lo Magellan, David Longstreth’s experiment in (relative) orthodoxy following a decade as a post-genre polymath, favouring restless conceptual manoeuvres over easy notions of authenticity. Following six albums featuring choral music, half-recalled Black Flag covers, agitated Afro-pop and Bjork collaborations, Swing Lo Magellan came billed simply as “an album of songs”, though in the end it was a little more complicated than that. With Longstreth, things are seldom as they seem.

On the follow-up, he toys with another established singer-songwriter trope. The blurb accompanying the eighth Dirty Projectors LP blares “THIS IS A BREAK-UP ALBUM”, referencing Longstreth’s split with former bandmate Amber Coffman. Yet this is no textbook exercise in backwoods blues, acoustic miserabilism and long shadows. He opts instead to express romantic pain through the medium of mainstream R&B, which should come as no great surprise. Longstreth recently worked with Kanye West and Rihanna, and co-wrote and co-produced chunks of Solange’s A Seat At The Table. Their influence is clear. Among the co-writers and collaborators here are Kanye’s “creative director” Elon Rutberg and Solange herself, who has a hand crafting the lovely, lilting pop skank of “Cool Your Heart”. Timbaland’s right-hand man, Jimmy Douglass, mixed the record. Battles’ Tyondai Braxton is another key cohort.

Some of Longstreth’s more obvious peers have been this way before. At times, Dirty Projectors recalls the polyphonic adventurism of Bon Iver’s 22, A Million and Sufjan Stevens’ The Age Of Adz. Like those records, it takes conventional songs and plants bombs beneath them, but Longstreth’s immersion is more brazen. “Winner Take Nothing” resembles Drake. “Cool Your Heart”, with its echoes of Beyoncé’s “Hold Up”, is tailor-made for daytime radio.

The suspicion inevitably lingers that Longstreth is playing another intellectual game, trying 808s and heartbreak on for size. The disarming opener, “Keep Your Name”, provides evidence both for and against. A woozy electro-ballad, beginning “I don’t know why you abandoned me”, it’s both painfully heartfelt yet entirely mannered. He lays out his sorrow and anger in a chocolatey R&B croon before breaking into a choppy rap which references Naomi Klein and Gene Simmons. And he hasn’t lost his flair for the meta. “Keep Your Name” samples a telling line – “We don’t see eye to eye” – from Swing Lo Magellan’s “Impregnable Question”, a duet with Coffman.

This is smart-arsed sadness, and we’re never quite sure whether Longstreth is speaking his heart or hedging his bets, whether he wants to confess or impress. Occasionally he fails to bridge the gap. “Ascent Through Clouds” hymns rebirth, Longstreth’s heavily treated falsetto set against a sweet drizzle of orchestration, which halfway through builds to a discordant crescendo, like a Millennial “A Day In The Life”. The message gets lost, however, somewhere in the busy cleverness of the medium.

As a rule, the punchier songs detail love’s end game. “Death Spiral” is a crisp, funky rake through a relationship’s final throes, Longstreth’s falsetto riding satisfyingly crunchy beats. “Work Together” is frantically glitchy R&B, a maze of sampled and treated voices, buffeted analogue beats, robotic phrases, piano glissandos and sharp strings. It’s a musical thrill ride, all bumps and jerks, nothing comfortable about it, which is presumably the point.

The seven-minute “Up In Hudson”, on the other hand, winds back to the beginning of the affair. It’s a New York love story, forensically detailed, and Longstreth gives it an appropriately warm setting; a soft breeze of ’70s soul horns, a dollop of doo-wop backing vocals. The second half morphs into a trippy guitar reverie, all feedback, drone and Indian rhythm, while “Little Bubble” glides into sorrow with a sighing string refrain and decaying organ notes. Longstreth wakes up alone – “how did you sleep, what did you dream of?” – and contemplates life outside the self-contained bubble of coupledom. It’s a beautiful, tender ballad, undeniably heartfelt.

As the album progresses, some form of resolution arrives. “I See You” ends on a note of “forgiveness and reconciliation”, the projected perfection of the lover fading away, and “in its place I see you”. Over thick waves of organ and heavy drums, Longstreth unites the romantic and the aesthetic: “I believe that the love we made is the art,” he sings. If art is love, and love is art, then this hyper-stylised, characteristically idiosyncratic break-up album, in the end makes a perfect kind of sense.

Q&A
DAVID LONGSTRETH
It’s been five years since Swing Lo Magellan. Why so long?
It came together slowly, and that was about internalizing the time I spent with Kanye, and Rihanna, and in the Solange camp. There are moments when the biggest stuff out there is also the most daring and the most exciting, and it’s just beautiful, the music that these people have been making. I didn’t know where I wanted to go next, and immersing myself in that environment I learned so much. I’ve always been creatively reckless, the thing that’s most exciting to me is to try new things. I needed that after Swing Lo. I’m really grateful.

The sound and textures are striking, but the album is built on disciplined songwriting.
There’s a tautness in the songs, but it’s layered with this level of arrangement which is pretty new. I was listening to a lot of Duke Ellington, so the arrangements are quite lush and intricate. I couldn’t have made this record without making Swing Lo and Bitte Orca, where I’m thinking about songwriting super hard.

Was writing about your breakup cathartic?
Music has been the way that I have processed life and experience, and it was a natural thing to do. It was the only thing I could do. I think it was cathartic. It’s frontloaded with the shock, horror and sadness, out-and-out despair, processing that experience, and ending up if not in a good place, then at least in a place of acceptance.
INTERVIEW: GRAEME THOMSON