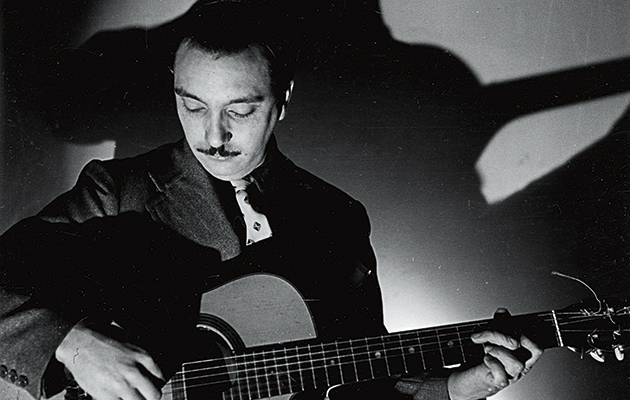 “Django was truly a composer who imagined a composition down to its smallest detail,” said his long-time collaborator, violinist Stéphane Grappelli, reflecting on the many abilities of guitarist Django Reinhardt. Indeed, calling Reinhardt merely a guitarist seems, somehow, to undersell his artistry. During their time together, in Le Quintette Du Hot Club De France, Reinhardt and Grappelli would pioneer ‘gypsy jazz’ and inveigle modernist developments from America – Reinhardt was listening to musicians such as Duke Ellington – into the French jazz scene. He’d also develop a particularly fluid approach to both improvisation and composition, something Diminishing Blackness maps out with great sensitivity and intelligence.

Much of the legend of Reinhardt rests on his triumph over adversity – more specifically, at the age of 18, surviving a caravan fire that left him bedridden for 18 months, and with minimal use of two fingers on his left hand, such that he would only be able to use his index and middle fingers to solo. While his rethinking of the guitar is fundamental to subsequent developments, he also helped shift the possibilities of soloing: his melodic improvisations moved the terrain forward from the tendency, among jazz guitarists, to work within chordal parameters.

You can hear all of that develop through Diminishing Blackness – it’s a lovely set, opening with a clutch of songs from the Hot Club, whose continued reappearances across these three discs acts as a marker, of sorts, of where Reinhardt’s head was at, both compositionally, and while playing with others. Reinhardt’s guitar had astonishing facility and fluidity – he seems to skate or fly between notes, but never at the expense of the melodic logic he’s exploring over the Hot Club’s chord changes. The push-me-pull-you between Reinhardt and Grappelli is great to hear, too – to hear them soloing after one another on the Hot Club recordings from the late ’30s is a joy.

But it’s the improvisations, and the later recordings, that really beguile here. “Improvisation No 3” from 1943 winds circuitously around a clutch of chords, a dazzling tension building between Romany jazz and flamenco-esque trills; “Improvisation 47 (Improvisation No 5)”, from a 1947 radio broadcast, is delicate and devastating, the nuances in the exploration of melody as unexpected as they are compelling.

Some wonderful early-’50s material appears on the third disc, including a definitive take on “Nuages”, Reinhardt’s electric guitar tart and sharp, with decisive cut-offs; it’s an evocative take on the composition, where you can hear the entire arc of the piece within the first few notes. After this, Diminishing Blackness explores contextual material – recordings inspired by Reinhardt, from figures like Barney Wilen,  Chet Atkins and Henri Crolla. It offers a space  to reflect on just how Reinhardt’s singular playing transformed jazz.