Curse Of The Golden Flower 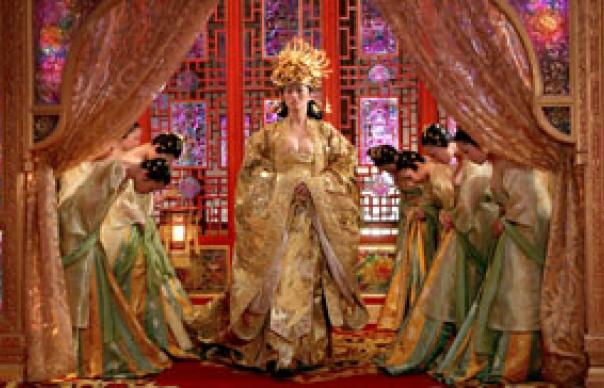 Fear and loathing in the Forbidden City! Emperor Ping (Chow Yun-Fat) returns from the wars to celebrate the Chrysanthemum Festival with the mysteriously ailing Empress Phoenix (Gong Li). Does he suspect she has been carrying on an affair with her stepson, Prince Wan (Liu Ye)? Will Wan elope with his lover, the Imperial physician’s daughter? And why on earth is the Empress stitching thousands of yellow armbands? These questions, and many more, are enjoyably resolved over two hours of domestic intrigue, double-cross and ever more elaborate costume-fittings.

Back when he was making a name for himself in the late 1980s/early 90s, the Chinese dubbed Zhang Yimou ‘the peasant director’ in recognition of earthy fare like Red Sorghum and To Live. More recently he’s been riding the Crouching Tiger wave with action spectaculars like Hero. After this deliriously decadent melodrama they’ll have to call him ‘the mad king’: there’s more gold here than in Fort Knox. The palace is a gaudy bauble of lurid sapphires, opals, and jades while on this evidence the Tang Dynasty dressed for excess (Gong’s corset deserves a best supporting Oscar nomination in its own right).

The series of dramatic last reel reversals would make Hamlet look anti-climactic, but the actors are definitively upstaged by stunningly choreographed, color-coordinated troop maneuvers and Zhang’s own obsessively florid embroidery. Ironically the highlight is virtually monochrome, a nocturnal assault by gravity-defying ninja assassins which feels like it belongs in a different film entirely.