The creation moments of the original power trio 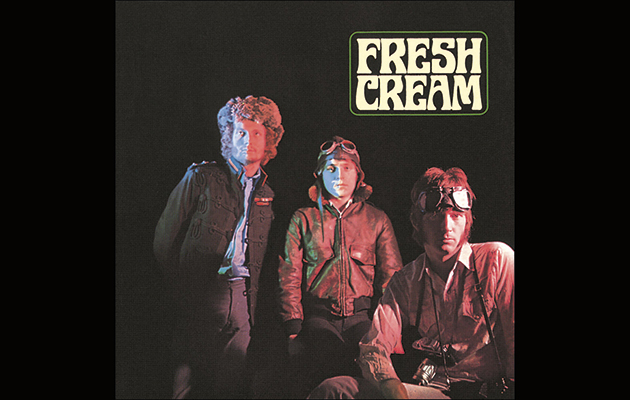 In 1966, Cream were a blues wolf in jazz clothing. An outfit with heavy individual reputations in their former bands (Eric Clapton with the Yardbirds and the Bluesbreakers; Ginger Baker and Jack Bruce with Graham Bond) their preparations for greatness took place under the radar. Prior to their low-key debut at the Windsor Festival, they rehearsed in a South London scout hut. “This is barely a third of the equipment,” they told Melody Maker’s already deafened correspondent.

On record, likewise, there was as yet not much to suggest the freeform heaviosity that the band would develop over the next three years. Their debut single “Wrapping Paper” (a composition by Bruce and lyricist Pete Brown) gave little clue that it was the work of musicians with revered chops. Instead, this was an interesting period curio, a McCartney-style jazz pastiche, in which the band assumed the persona of a barbershop quartet remembering an idyllic summer with a lost love. Mild subversion came from the title (for “wrapping” substitute “rolling”) which suggested this reverie had perhaps been prompted by smoking a joint.

In a short interview for BBC Radio’s Saturday Club, included in this set, host Brian Matthew suggests to a young Eric Clapton that this isn’t the single people have been expecting from them. “We wanted to surprise them,” says Clapton. “We wanted to show them we were more than just a blues band.”

Certainly that was what he was hoping. When Cream first met the press, they were anxious to suggest they were into something new – not blues, not jazz. Clapton, whose talk was of Dada and taxidermied animals, seemed keenest of all to break with his past, and his reputation as a blues hotshot. He wanted to buy a stuffed bear for the band to have onstage with them, and have made a top hat which incorporated a bird cage.

Cream’s 1966 debut Fresh Cream, basically a 50/50 split between their own songs and blues covers, shows how they succeeded and failed in these ambitions. With their airman’s goggles and Davy Crockett hats, Cream were clearly not interested in reverently polishing blues antiques with John Mayall. Their own songs (say, Bruce’s “NSU” or Baker’s “Sweet Wine” – like “Sleepy Time Time” written with Bruce’s wife Janet Godfrey) promoted something a bit more exciting. “I Feel Free” wasn’t a bad way of putting it.

The songs are all about playing in a band and relaxing, the joy of being young, and they walk it like they talk it, being jumping-off points for wonderful spur-of-the moment improvisations. Nonetheless, the band didn’t have an oversupply of this stuff, and so – possibly against his inclinations – Clapton’s blues portfolio (covers of Willie Dixon’s “Spoonful” and Robert Johnson’s “Four Until Late”; Muddy Waters’ “Rollin’ And Tumblin’” and “I’m So Glad” by Skip James) was opened to fill out their repertoire.

Night after night on a circuit where they filled bookings intended for Graham Bond, Cream offered a set which extended and departed from its raw materials. This, with its discs of mono and stereo mixes, contemporary singles, and a third with outtakes, alternates and radio sessions does much the same. It’s a thorough document, but also by its nature helps illustrate how from the off, the band could never quite find the format (single, album, double album) to demonstrate their uniquely exploratory and contradictory nature (blues/psych; pop/counterculture; composed/improvised) and show their full powers.

Still, as primitive, and occasionally bloody awful as is the original stereo mix (especially on headphones, where it makes you feel like you’ve got flu), the dissonance between harmony vocals or guitar solo (left channel) and full band (right) found the band and engineer John Timperley creating a fabulously savage juxtaposition, with something like the power of a live performance.

It’s a mighty thing. On “Sleepy Time Time” and “Spoonful” you can hear the roots of Sabbath and Zeppelin’s hammer swing, the amps humming in the room. Even during their cover of “Rollin’ And Tumblin’”, where Jack Bruce sounds more Peter Sellers than Muddy Waters, his unfortunate minstrel show is rescued by the ferocious performance.

Clapton’s blues chops gifted the group Skip James’ “I’m So Glad” and the riffs for “Toad”, otherwise a (admittedly very good) three-minute drum solo for Ginger Baker. If it doesn’t sound especially appetizing in principle, it does however give a good idea what Cream’s airman’s uniforms might have been about. The origins of their music was in the earth, but their transformative power was in revealing how it might take flight.

EXTRAS 6/10: The third disc of extra material isn’t quite the Early Floyd-like trove you might hope for on a deluxe project like this. There’s clearly been no discovery of the band’s October 21st ’66 session, and the third disc otherwise stripmines 2003’s The BBC Sessions for contemporary material, with the odd previously unavailable track added. Sometimes perversely, it must be said. It’s interesting that they did “Sitting On Top Of The World” on November 28th ’66 but wouldn’t record it until Wheels Of Fire – but it’s excluded here. Otherwise, the new mixes are welcome, and the (few) bonus tracks like “The Coffee Song” and “Beauty Queen” good to have. The collation of EP material in one place is good housekeeping, if not exactly incentivizing.