Courtney Barnett – Tell Me How You Really Feel

Boldly affecting return from the hardest-working slacker in showbiz 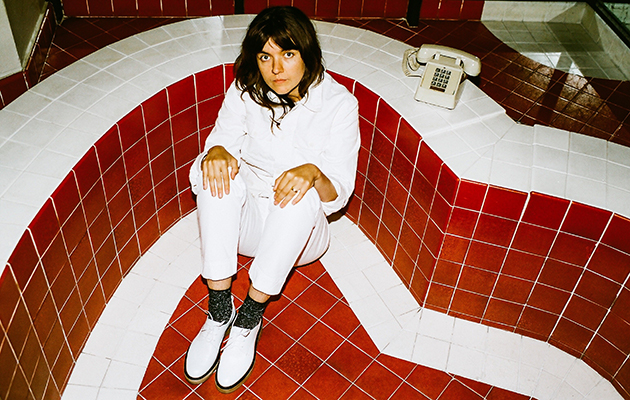 “Sprawl”, according to the country’s unofficial laureate Les Murray, is that quintessential Australian quality of cheerfully casual excess. It’s “the fifteenth to twenty-first lines in a sonnet”, “full-gloss murals on a council-house wall” and “the rococo of being your own still centre”. Across a couple of EPs, her 2015 debut album and last year’s collaboration with Kurt Vile, it’s why we’ve grown to love Courtney Melba Barnett – the goofily exuberant loose magic with which she has re-enchanted grungey ’90s garage rock.

It’s there still on the comeback single “Nameless, Faceless”, where, in her zen insouciance, she even finds it in her heart to sympathise with comment box trolls. “I could eat a can of Alphabet Soup and spit out better words than you”, her detractor claims, but it’s part of her great charm that Barnett gives the impression of managing exactly that: effortlessly transmuting the quotidian details of Melbourne life – swimming, gardening, looking at a new flat – into casually profound, delirious pop art.

But it’s the album’s second advance track “Need A Little Time”, that really indicates where she’s heading on Tell Me How You Really Feel, this difficult second album. It’s a slow, patient number, led by a humdrum strum and unfussy Hammond organ, that builds patiently and very deliberately refrains from wisecracks or wordplay. “Shave your head to see how it feels,” she sings with tender weariness. “Emotionally it’s not that different/But to the hand it’s beautiful”. It feels like a key line on an album that endeavours to pare back unnecessary extravagance, to speak boldly and baldly. The song is most eloquent in the way Barnett’s sprained voice cracks into falsetto on the simple words “me… and you”, and the ragged, sad glory of her guitar solo.

The album begins with “Hopefulessness” – a typically happy/sad Barnettish coinage – and a riff that’s a kissing cousin of Nirvana’s “All Apologies”. “You know what they say: no-one’s born with hate”, she sings. “We learn it somewhere along the way.” Putting such a dejected, downbeat number at the start of the record could lead you to think that TMHYRF might be Barnett’s In Utero – an album about the soul-destroying, dementing consequences of sudden international fame, at a time when anonymous misogyny is emboldened as never before. But in fact this is the album’s jumping-off point rather than its conclusion. The track ends with the sound of a kettle boiling, and the album that follows is the sound of someone trying to readjust and reconnect to the marvels of the mundane after months stoking the star-making machinery behind popular song.

It’s hard not to hear these songs in the context of Jen Cloher’s self-titled album from last summer where she pitilessly described the pain of watching Barnett – her partner, fellow label boss, and sometime guitarist – be swept away on waves of global acclaim (on “Forgot Myself”, Cloher magnificently appropriated Jagger: “You’re riding around the world/You’re doing this and signing that… I’m driving in my car/Your song comes on the radio/And I remember what I always forget: loneliness.”)

It’s not a comparison that necessarily flatters Barnett. “Friends treat you like a stranger/And strangers treat you like their best friend” she sings on “City Looks Pretty”, one of a couple of songs here that tries to rock without its heart really being in it. “Sometimes I get sad,” she sings a little bathetically, “it’s not all that bad”. At her worst, Barnett’s lyrics can feel like ironic motivational posters for slackers – the album is full of entreaties to “pull yourself together and calm down” and reminders that “darkness depends on where you’re standing”. Admittedly, Kurt Cobain might still be with us if he’d sat down with a cuppa and looked on the bright side, but they can feel a little trite without the usual shaggy dog wit or vim.

The album really comes into its own in the second half, after the much needed spleen of “I’m Not Your Mother, I’m Not Your Bitch” (“I try to be patient but I can only put up with so much shit”). “Walkin’ On Eggshells” is a frazzled bittersweet Neil Young ballad that might have found a home on the Kurt Vile collaboration, but the closing “Sunday Roast” takes the record, and Barnett’s art, to a new dimension. It starts out as a shuffling, dreamy REM reverie of reconciliation. But then the key changes and it’s like the sun coming out at the end of a dismal week. “Keep on keepin’ on/You know you’re not alone/I know all your stories but I listen to them again”. Barnett is hopefully never going to mature into a straightforwardly po-faced confessional singer-songwriter, but It feels like she now trusts the power of her music to imbue even cliché with emotional power. The hardest working woman in slacker rock doesn’t look like slowing down any time soon.

Q&A
Courtney Barnett
You fretted about the running order of your first album for months. Was it more straightforward this time? “Hopefulness” is a bold choice for an opening track…
For so long it was going to be the last song. The tracklisting always gets me stuck – it such an important part of an album, I reckon. It can really make or break the listening process, which is such a pity when you’ve put so much effort in. At the end of the Kurt Vile tour Jen [Cloher] and I did this road trip across America and we listened to the album in 10 or 15 different orders until it felt right. So that was really handy having her ear. Putting that song at the start seemed to make sense. It gave me the feeling of the orchestra tuning up and everything slowly falling into place. A real easy staggered start. And it sets the tone for what follows.

This feels like a much more direct album – there are fewer gags or puns. Are you becoming a grown-up singer songwriter?
I dunno – it’s hard to tell from my position. I feel like I definitely faced up to a lot more emotions and tried not to fall back on easy humour to mask things as much. I think a lot of that is still in there – it’s a bit tongue in cheek, there’s a bit of silliness. It’s always good to have a balance. Any time I’ve used humour before was to really cover up a much darker feeling. It’s probably a more vulnerable representation of it now.

For someone characterised as a slacker you are incredibly productive. Do you feel on top of your game right now?
I don’t know. I feel there’s always something you can be doing better. But yeah, I feel lucky to be able to create all this stuff with people I love.
INTERVIEW: STEPHEN TROUSSÉ