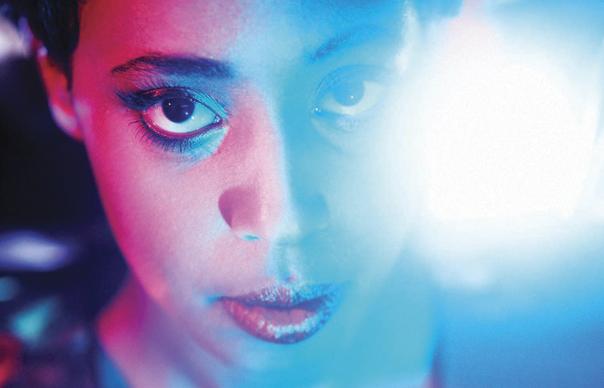 “Neuroplasticity” is a term which relates to the brain’s ability to evolve when faced with new behaviour, environments, stimuli or trauma. According to Al Spx, the 26-year-old Canadian singer and songwriter who broods, bristles and snarls behind the soubriquet Cold Specks, she chose it as the title of her second album to honour “a creative rewiring process. It implies an aesthetic change.”

Which, after prolonged immersion in this rather remarkable record, seems about right. Neuroplasticity is the follow-up to Cold Specks’ 2012 debut, I Predict A Graceful Expulsion, and bears the same relation to that album as an abstract oil painting does to an accomplished sketch. …Expulsion placed Spx’s core sources – old spirituals, delta blues, southern soul, Alan Lomax field recordings – into an overly-polite gothic-folk setting of carefully plucked guitars, soft piano, keening violins and primal rhythm. It’s a lovely record, but it could have offered more bite and daring.

Past songs like “When The City Lights Dim” suggested that Spx could turn her hand to vaguely anthemic radio-friendly fare, but in the event she has travelled to the other extreme. While I Predict A Graceful Expulsion was recorded in less than a fortnight, Neuroplasticity was stitched together over a period of six months. That time was clearly not spent applying commercial polish, but instead building a bigger, bolder musical framework to give full vent to her extraordinary voice – two parts Patti Smith, one part Tom Waits, one part Macy Gray – and unbendingly bleak world view.

The dark, churning soundscapes on Neuroplasticity frequently approach the kind of fever-pitch of confrontational intensity which bears comparison with Nick Cave and PJ Harvey, combined with the tribal kick of 80s Kate Bush. “A Quiet Chill” has the same irresistible pulse as “The Big Sky”, while “A Formal Invitation”, with its bat-shit rhythm and layered, multi-octave backing vocals, has the edge-of-madness feel familiar from The Dreaming.

At other times Spx feels like a kindred spirit to notorious margin-hangers like Diamanda Galas and Swans. It seems entirely fitting that Michael Gira guests on two songs, his light-swallowing rasp intoning “hung, drawn, quartered” on “Exit Plan”, and adding an added layer of lupine menace to the album’s pitch-black highlight, “Season Of Doubt”. Even here, Spx out-glooms her co-vocalist, signing off with the promise that she possesses “an unrelenting desire to fall apart.”

The results suggest a spectral Odetta covering late Talk Talk, a bewitching tapestry made up of uncomfortable silence, broken piano chords and forlorn trumpet, the latter courtesy of young American jazzer Ambrose Akinmusire, whose contributions prove to be one of the album’s most engaging new textures. His squealing horn lines skid all over opener “A Broken Memory”, as well as “Old Knives”, which pledges kinship to The Cure’s Faith, with its slow-hanging guitar arpeggios and funereal drum tattoo.

Spx’s use of traditional black American sources is less overt but remains in evidence. Avant-garde jazz notwithstanding, “A Broken Memory” is a bleached machine-gospel stomp. “Absisto” is built on a blues drone, stretched and distorted over a bass-heavy rhythm, beautiful and sinister at the same time. “Living Signs” is clipped gothic funk, with a lyric – “I did not intend to raise the dead” – which evokes images of vine-covered New Orleans graveyards. There are other connective threads to Spx’s past work. “Change Of Command”, a lithe construction of fluid guitar lines and an almost-pop melody, recalls “Hector” from her debut. The gentle, undulating “Exit Plan” also returns to the calmer waters of …Expulsion, at least until the peace is, somewhat inevitably, shattered by eruptions of sonic turbulence.

Spx, who now lives in London, wrote much of this record in a remote cottage during a winter escape to the West Country, and the penetrating chill is tangible. Neuroplasticity is an unrelenting ride, but there’s something heroic about its unwavering commitment to its nightmare visions. On “A Quiet Chill” Spx growls “I remain unshakeable”. Every note of this compelling album backs her up.
Graeme Thomson

Q&A
AL SPX, COLD SPECKS
What changed between …Expulsion and Neuroplasticity?
My first album was a deeply personal folk record, and it became difficult performing those songs over two years. I felt like a bad actress and I wanted to change that. I made a conscious decision to make a more playful album with a much more expansive sound.

“Playful” isn’t necessarily the first word I’d use!
Sonically it’s playful. Lyrically and thematically it’s still incredibly dark. I don’t know how to write in other ways, I’ve come to accept it.

Why did you go to the West Country to write?
It was winter in London, miserable, and a friend had a cottage available for a few weeks. I had a couple of flat mates in London I just needed to get rid of! I definitely need to be alone to be comfortable with fully exploring sound. I don’t like to make errors in front of people, so I isolate myself.

How did Michael Gira come on board?
I couldn’t sing as low as he does! Luckily for me he was a fan and agreed to do it. He was kind and gracious throughout the entire process. I’m a very big fan of his, so it was a great pleasure.
INTERVIEW: GRAEME THOMSON