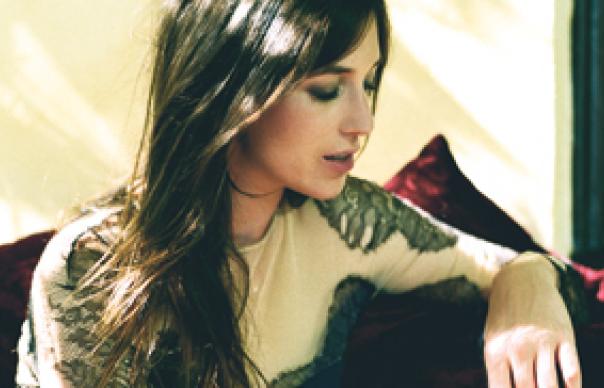 In the last year, cinema audiences will have seen Charlotte Gainsbourg starring in Lars Von Trier‘s Antichrist, playing a woman who loses her child, tortures her husband, rampages around a German forest and then mutilates herself with a pair of scissors. But despite numerous awards and huge critical acclaim as an actress, she is still primarily remembered for two earlier screen appearances, both made with her father Serge Gainsbourg. One is home-movie footage of her aged about eight, playing a complicated exercise on the piano while her beaming father hums along in encouragement. The other is a rather less benign promotional video for her father’s worst single, “Lemon Incest“, in which the 13-year-old duets with the king of sleazy listening, lying beside him on a bed, wearing only a blouse and knickers.

Perhaps mindful of the latter image, Charlotte Gainsbourg has been reluctant to pursue a career in music. It took around two decades before she got around to recording her first album as an adult, 2006’s well-received 5:55, in which she was assisted by celebrity Serge-ophiles such as Air, Jarvis Cocker and Neil Hannon. Yet still she seemed awed by her father’s shadow. “I might think in French, but I cannot sing in French,” she said. “It’s too heavy for me, because of my father.”

This follow-up is her most explicit embrace of her father’s musical legacy. It pairs her with another Serge-ophile, Beck, whose 2002 album Sea Change saw him borrowing from Serge’s seminal album, Histoire De Melody Nelson. Here Beck plays Serge to Charlotte’s Jane Birkin, co-writing and producing the entire album and attempting to stamp it with his scruffy brand of futurist Americana. He even shares vocals on the lead single “Heaven Can Wait”, a thing of ramshackle beauty that should, by rights, be Beck’s biggest hit in more than a decade.

Charlotte’s whispery, well-enunciated, jolly-hockey-sticks voice is an obvious echo of her mother’s, although there is a deadpan, newsreader-ish quality. It’s immediately apparent that Charlotte Gainsbourg is no blank canvas, in the way that her father’s ingenues (Birkin, Brigitte Bardot, France Gall, Franoise Hardy, Michle Arnaud) might have been. She had a pivotal role in the album’s writing, particularly the title track, “IRM”, the French translation of an MRI scan (that’s Imagerie par Resonance Magnitique). Charlotte apparently had 20 such scans after suffering a brain haemorrhage in 2007. The lyrics serve as a poetic reportage of the incident (“leave my head unmagnetised/tell me where the trauma lies”), but the pulsating backing track – a barrage of pounding tom toms and jarring sound effects – genuinely sounds like an MRI scan, albeit one in which these orientating electronic noises have been processed into a thrilling slice of junkyard punk in the style of The Flying Lizards.

Her other lyrics are nothing like the pun-heavy, ultra-literate couplets her father wrote, but the album certainly sees her and Beck explore Serge-ish musical textures. “Le Chat Du Cafe Des Artistes”, a cover version of a 1970 song by Quebecois songwriter Jean-Pierre Ferland, sees Beck couch the melody in creepy minor-key strings that certainly recall Jean-Claude Vannier’s arrangements for …Melody Nelson. The eerie verse/jolly chorus of the lovely “Time Of The Assassins” recalls Serge’s dreamy “69 AnnŽe ƒrotique”, while the Bolan boogie of “Dandelion” has a touch of “Rock Around The Bunker” to it. “Voyage”, with its mix of African drums and American trash-culture references, is a nod to Serge’s early 1960s world music flirtations like “New York USA”. Even the hints of Bjork-ish post-punk, like “IRM” and “Trick Pony” often recall Serge’s more minimal experiments, such as “Requiem Por Un Con”.

Ever since her father’s death in 1991, Charlotte has kept Serge’s house on the Rue du Verneil as he left it, and has sought permission from authorities to turn it into a museum. In a way, this album serves as a fitting sonic museum to Serge, one that plunders from his past while maintaining his relentlessly forward-looking, hybridised pop vision.