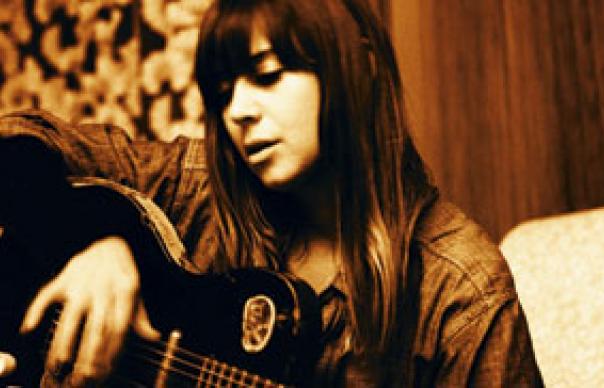 Wong Kar-Wai, who cast Chan Marshall opposite Jude Law in his American movie, My Blueberry Nights, had a line about the singer’s appeal: “If Charles Bukowski and Jane Birkin had a child, it would be Cat Power“. Which is to say that she flits between sleaze and innocence, and that the two qualities bleed into each other to the point where they are indistinguishable.

A shrinking violet who has modelled for Karl Lagerfeld, inhabits a contradiction. In essence, this exhibitionist with stage fright is a soul singer. There are wisps of gospel in her work, and rhythm’n’blues, but you’d wait an age before hearing her do anything that might easily be described as “funky”. Even on 2006’s sultry The Greatest – with the Hi Records band behind her – her performance was restrained. Here, with her new band, Dirty Delta Blues (Dirty Three‘s Jim White, Jon Spencer Blues Explosion‘s Judah Bauer, Delta 72‘s Gregg Foreman, Lizard Music‘s Erik Paparozzi) the music does get swampy and dark, but the atavistic urgings of the group are held in check by the gentle clarity of Marshall‘s voice.

Usually, “soul” implies exultation and effort, but Marshall rarely engages with either concept. As soul divas go, she is closer to Julee Cruise than to Aretha Franklin. She sings airily, and often in a way that sounds disengaged, sometimes to the point where the listener may wonder whether she is singing at all, or merely dreaming her way through the lyrics. She has a habit of deliberately squeezing into ill-fitting shoes – here, the fuck-me pumps of Liza Minnelli or, more likely, Frank Sinatra – on the theme from New York, New York, which is robbed off its Broadway swagger, and becomes instead a geographically-incorrect sliver of swampy Southern soul.

Jukebox is a sequel to 2000’s The Covers Record; Marshall‘s fifth album, but the first on which her talent was fully realised. Covers saluted the artists who inspired her (Lou Reed‘s I Found A Reason, Wild Is The Wind via Nina Simone) but these weren’t the kind of lazy jams a band might prepare for a b-side. They were full-scale reconstructions. The record was an act of reinvention for Marshall, too. The voice had always been there, as had the habit of floating it over a tune in which the melody had drained away, but from the first tentative bars of (I Can’t Get No) Satisfaction, it was clear that something structural had snapped into place. Marshall approached it slowly – a porch swing would have generated more electricity. For Jagger, Satisfaction was a cocky strut; Marshall castrated the song, turning it into an oozing river of sensuality.

If anything, Jukebox is bolder than Covers, not least because two of the more obvious songs have been dropped from the original intended tracklisting. Dark End Of The Street and Creedence‘s Fortunate Son have gone, and in comes Jesse Mae Hemphill‘s blistering spiritual Lord, Help The Poor And Needy. Hemphill beat the hell out of a tambourine. Marshall does it as a low blues, less rabble-rousing, but with more menace, as she sings: “Lord, help the human race, ’cause when we all die together and we face the morning sun…”

She is helped immeasurably by the versatility of the band, as evidenced by a crisp reworking of her own Metal Heart (from Moon Pix). But on the covers, the perversity of the arrangements is, you imagine, all Chan‘s.

Hank Williams‘ Ramblin’ Man has his gender changed – no small thing in a song about a man whose sense of commitment is tested every time that old Southern train comes over the hill – and the visceral bluntness of the tune is replaced by an airy, easy blues. It sounds like a postcard from outer space.

Her good taste is exemplified by the presence of George Jackson‘s Aretha, Sing One For Me. Jackson‘s best-known song is the Jackson 5’s One Bad Apple, but Aretha is a plaintive soul ballad about a man who is begging Ms Franklin to sing something to persuade his baby to return. With the genders switched, Marshall‘s version sounds as if it has been gatecrashed by Keith Richards.

This irreverence runs throughout Jukebox. Joni Mitchell‘s Blue is quite startling, with the vocal arched over a church organ, while on James Brown‘s Need Someone, Marshall surgically removes the religion from the vocal, leaving the song to subsist on a diet of sex and longing. Spooner Oldham and Dan Penn‘s A Woman Left Lonely has none of Janis Joplin‘s histrionics, while Billie Holiday‘s Don’t Explain is left sounding more spooky than bruised.

Her obsession with Dylan is represented by two songs: a gritty, unfocused attempt at I Believe in You, and Song For Bobby, a musical fan letter which recounts a meeting with her hero. It’s appealing enough, but embarrassingly literal on an album that is notable for its sleight-of-hand.

Marshall doesn’t cover songs. She uncovers them. And obviously, the worst song on the record is also the best. When the Highwaymen sang Lee Clayton‘s Silver Stallion it sounded like the last exhausted attempts of Waylon, Willie, Cash and Kristofferson to summon the rebel spirit. Marshall views it as a sexy lullaby. She is about to hit the open road in search of a reckless man with “just a touch of sadness in his fingers/thunder and lightning in his thighs.” And, she sings – sweetly, filthily – “we’re gonna ride.”