Big names, spies and laughter in the dark from the Coen Brothers 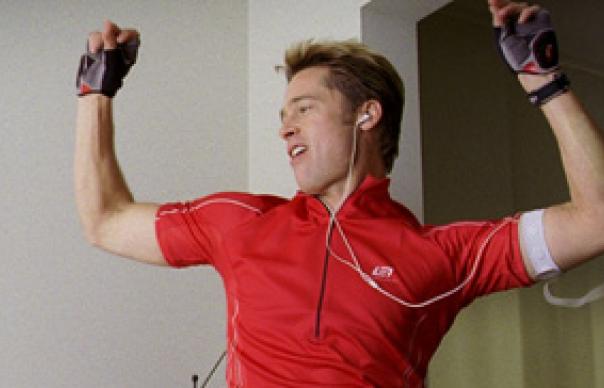 Kicked out of the CIA, Balkans expert Osbourne Cox (John Malkovich) decides to write his memoirs, detailing his distinguished career with the agency, but accidentally leaves his drunken ramblings on a computer disc in the Hardbodies gym. They are picked up by fitness workers Chad Feldheimer (Brad Pitt) and Linda Litzke (France McDormand), who mistake them for government secrets and hatch a plan to blackmail him. But Cox is an angry man, and not an easy target.

When Joel and Ethan Coen collected their Best Director and Best Picture awards last Oscar night for No Country For Old Men, you might have wondered what they were planning next. After all, one of the Coens’ most familiar traits is their ability to swerve from screwball comedy to deadpan noir, often within the space of the same film. So, after their dry, lean adaptation of Cormac McCarthy’s novel, it should come as no surprise that Burn After Reading is, broadly speaking, a very funny comedy, one we might put along side The Hudsucker Proxy, The Big Lebowski and, more controversially, Intolerable Cruelty and The Ladykillers. It [ital]could[ital] even be called screwball; it certainly moves at the kind of quickfire pace familiar from Hawks’ pictures like Bringing Up Baby or His Girl Friday. But, in fact, Burn After Reading is quite possibly one of the least attractive films the Coens have ever made, to the extent that its populated by some of the most grizzly, greedy and ugly characters they’ve ever created.

Nobody here is likeable. Everyone has an ill-conceived hare-brained scheme. It’s like Fargo without Marge Gunderson, the good-hearted police detective of Brainerd, Minnesota. Except that the actress who [ital]played[ital] Marge is in it, and she’s the worst of the bunch. Life’s unfair, and she’s the proof. Overleaf, the Coens tell us that Burn After Reading started out as an experiment, with each part, except the character played by Tilda Swinton, tailored to a specific actor. And certainly there’s plenty of entertainment to be found watching George Clooney (in his third Coens film), Brad Pitt and John Malkovitch play such awful, unredeemable people.

Though Clooney and Pitt are the movie’s marquee sells, the film’s anchor is Malkovich’s Osbourne Cox – an angry, sulky CIA agent who gets fired within minutes of the film starting. Cox thinks he’s a big-time agent, but he’s not even the master of his own home: his frosty wife Katie (Swinton) is having an affair with Harry Pfarrer (Clooney), a federal Marshall who is also married, miserably, to a famous children’s author. Pfarrer regularly cheats on her, making assignations through internet dating sites, which is how he meets fitness trainer Linda Litzke (McDormand). Clooney does his best work for ages here, as a grinning, sleazy dork who thinks he’s charming but in truth comes across as rather needy and pathetic. Harry has a secret life as a DIY man, and his pride and joy is an X-rated rocking chair with a pink dildo attached and whose special features Harry guides an excited Linda through with equal enthusiasm.

Though this might appear to have the makings of a zippy, madcap comedy, as ever with the Coens, there’s darkness here. Cox has a violent temper as well as a serious drink problem; Katie, his wife, is avaricious and calculating; Harry Pfarrer is a paranoid sex addict; Linda Litzke is out for all she can get, desperate for the cosmetic surgeries that her health insurance won’t pay for. Meanwhile, the would-be “player”, Pitt’s Chad Feldheimer is splendidly gormless. The only character with any morality is Ted Treffon (Richard Jenkins), the manager of the Hardbodies gym who has a thing for Linda, but whose heart, you figure without too much trouble, is bound to get broken along the way.

With all these big names jostling for screen time, it’s perhaps surprising that the standout is Pitt, who rarely does straight comedy these days. Chad’s gurning, goofy antics offer by far the most obvious laughs here, while another plus is that his preposterously styled hair is at least as memorable as Javier Bardem’s baroque fringe in No Country For Old Men. Chad is the focus of the film’s first hour, and it’s one of Burn…’s many achievements that you find yourself rooting for this witless idiot, particularly when he comes up against the rancorous Cox.

In trying to identify what all this means, it’s tempting to suggest that Burn After Reading is about how, as much as we try to organise our lives, things rarely ever go to plan, particularly where money is concerned. That, in itself, has been the spark for many Coens films – from Jerry’s kidnap plot in Fargo through the confusions over the correct Mr Lebowski all the way back to the first double cross that precipitates the grim unspooling of events in Blood Simple. The Coens explain how Burn After Reading partly harks back to the political conspiracy thrillers of the Seventies, and it’s just possible to see this as an allegory for America’s post-9/11 paranoia. Certainly, it says something about the impossibility of intelligence-gathering when human beings are themselves so unintelligent, a reality faced by the superb JK Simmons in a role that saves the film from being just too depressingly acerbic. With CIA “secrets” on the market, and two gym bunnies brokering the deal, he can only look and wonder, instructing his equally disbelieving staff in the only way he can fathom.

“Watch them, see what they do,” he suggests, awkwardly. “And let me know when it all makes sense.” As for the Coens, and their career so far… Oscar or no Oscar, this puts it rather perfectly.