Pop genius tinkers with The Great American Songbook. Not bad, but not great... 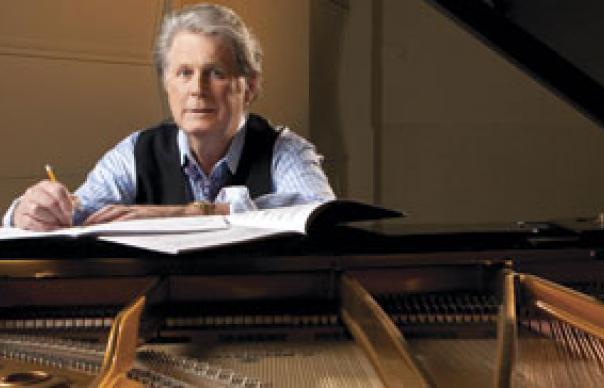 Brian Wilson, a little befuddled and slightly deaf, is talking to Uncut about his love of George Gershwin. “You know that riff in ‘Rhapsody In Blue’?” he says, suddenly animated. He sings out the swaggering horn motif that occurs about 40 seconds into the piece. “Now that is the very embodiment of rock’n’roll! It’s like a heavy metal riff!”

It’s an interesting observation, and one that few people seem to have noticed. While other masters behind The Great American Songbook – Irving Berlin, Cole Porter, Richard Rodgers – wrote songs that found a home in the rock era (“White Christmas”, “Don’t Fence Me In”, “Blue Moon”), George and Ira Gershwin’s oeuvre – “Summertime” aside – has found itself signally resistant to rock’n’roll and all that followed.

On a few tracks on this album, Wilson tries gamely to drag some of Gershwin’s melodies into a rock context. “They Can’t Take That Away From me” is turned into a Showaddywaddy-style shuffle (complete with “woop-woop” backing vocals); “I’ve Got A Crush on You” sounds like a parody from the Grease soundtrack; while “I Got Rhythm” is a rockabilly tune, all honking saxes and jabbering pianos.

Unfortunately, none of these efforts work. Gershwin’s compositions – elegant Art Deco structures, all rounded corners and filigree stained-glass windows – look out of place among rock’n’roll’s concrete brutalism. Wilson is in much safer territory when he attempts to rebuild Gershwin on ground that they share – fusing the sophisticated chamber pop of SMiLE with the witty Romanticism of the Gershwin songbook – and around half of the album does this pretty well.

The overture from “Rhapsody In Blue”, which bookends the album, is rendered as a gorgeous Beach Boys-style a cappella by Wilson and his choir of Wondermints. Wilson resists the temptation to turn “Summertime” into a chundering Janis Joplin/ blues howler, instead it’s anchored around a Duane Eddy guitar riff and a beautifully constructed arrangement for vibes and strings.

“’S Wonderful” is radically recast as a bossa nova, while the one instrumental, “I Got Plenty Of Nothin’”, is turned into a jolly farmyard romp, using the same bass harmonica and tack piano that you hear on Pet Sounds’ “I Know There’s An Answer”. There’s also a nod to Pet Sounds on “It Ain’t Necessarily So”, which uses the same timpani and vibes as “Let’s Go Away For A While”, while “Someone To Watch Over Me” uses a “Caroline, No” harpsichord. Meanwhile, “I Loves You Porgy” shows that Wilson is not a bad jazz crooner; like Willie Nelson, he can take liberties with pace, phrase well and improvise in all the right places.

Most interesting are the two Wilson/Gershwin “co-writes”, based around a clutch of George G’s unfinished songs. “The Like In I Love You” is soppy, mawkish and utterly lovely, drenched in strings and based around a complicated Gershwin chord cycle. “Nothing But Love” sounds more like an early Beach Boys song, but with one killer Gershwin chord change that Wilson navigates well.

There are moments where the strings and backing vocals lurch into sickly sweet (the positively diabetic “Our Love Is Here To Stay” wouldn’t sound out of place on a Ray Conniff LP). But at least half of this album successfully unites two of America’s greatest songwriters.
John Lewis

Q+A – BRIAN WILSON
When can you first remember hearing Gershwin’s music?
One of my earliest memories is hearing “Rhapsody In Blue”, aged two. My mom played it to me lots. Much later, when I was about 28 years old, I learned to play it at the piano from Leonard Bernstein’s record. I’d play a bar of the record, take the needle off and then try and copy it on the piano. It took me weeks! But eventually I had it all memorised.

Van Dyke Parks once said you had more in common with Gershwin and Porter than you do Lennon & McCartney. Is that true?
Yes, that is very true. That’s the world I come from, much more than rock music. I’m comfortable in that American Songbook era.

How did the George Gershwin “co-writes” come about?
Gershwin’s estate sent me CDs with 104 of his unfinished songs. They’re recordings of him playing the piano. We narrowed it down to two songs, used some of the chord changes and put our own tune and words over the top. We’re writing from the heart. Guided by George, hah!

Any truth in the rumours that you’re re-joining The Beach Boys to tour next year?
No, there’s not. They might do some cover versions of our songs, but The Beach Boys are not going to work together.
INTERVIEW: JOHN LEWIS