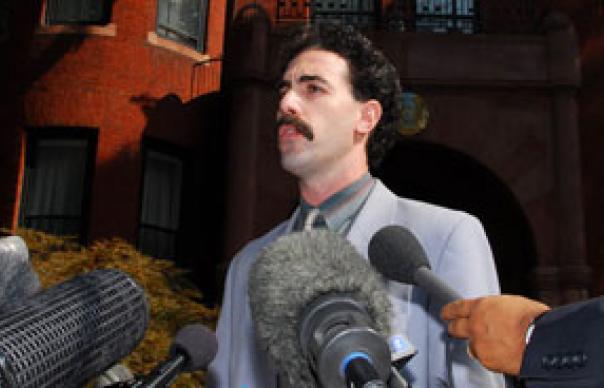 WITH the exception of Snakes On A Plane, no recent film has faced such a struggle against the weight of pre-release hype. The cinematic debut of Sacha Baron-Cohen’s hapless Kazakh reporter caused an uproarious diplomatic bunfight. Kazakhstan’s government threatened legal action against Baron-Cohen. A trip to America by Kazakhstan’s president was surely the first state visit undertaken to limit damage by a satire. To be half as amusing as its effect in the wider world, Borat would have to be very funny indeed in the cinema.

It is, but not for the reasons Borat’s apologists ingenuously suggest. A conventional wisdom has coalesced around Borat, and is deployed frequently to placate Kazakh outrage. They’re understandably annoyed that the only thing anyone now knows about their vast country is that it is the putative homeland of an oafish, sexist, racist, anti-semitic, homophobic dimwit.

This standard view holds that those who laugh at Borat aren’t really laughing at him – or, by extension, at other foreigners with cretinous beliefs and repulsive habits – but at the reaction of others to him. That the joke is really on we smug, insular, ignorant citizens of the first world.
This is nonsense. The reason that Borat is such a liberating hoot is Baron-Cohen’s understanding that nothing is funnier than what we’re not supposed to laugh at – and, in the early 21st century, the pressure upon us not to laugh at the backwardness and stupidity of foreigners has been considerable. We are expected to take seriously people who want to execute cartoonists for drawing, and stone women for having sex – neither of which, as ideas, are dafter than the Kazakh custom, described by Borat, of compelling gay people to wear blue hats. Our laughter at Borat is the same as our laughter at Molvania, the glorious travel guide to a fictional Balkan hellhole. It’s the laughter of those of us basking on the sunlit uplands of sense and civilisation at those thrashing wretchedly in a swamp of wrongness.

Certainly, Borat is not a satirical assault on America. If that was Baron-Cohen’s intent, he fails. What astonishes about every American he encounters is not their naivete, but their politeness, hospitality, and the extraordinary degree to which Borat has to inflame situations to provoke reaction. Had he attempted these antics in many other countries – bringing a hooker to dinner, desecrating the national anthem in front of a rodeo audience – he’d have conducted the publicity campaign in traction.
All of which may be reading too much into what is, before it is anything else, a tour-de-force by a brilliant comic actor. Baron-Cohen clearly aspires to be judged alongside the greats – Borat’s look and demeanour is equal parts Groucho Marx and Peter Sellers’ Jacques Clouseau. As evinced by the most memorable naked wrestling scene since Women In Love, he is commendably prepared to descend to any depth in pursuit of applause. And, between his innate abilities and apparently limitless pluck, he has ushered a magnificent, doubtless enduring, comic creation into the pantheon. So, laugh at Borat by all means – just don’t kid yourself about why.

PLOT SUMMARY
Kazakh TV reporter and idiot Borat Sagdiyev is commissioned by his homeland’s Ministry of Information to make a documentary about the US. Upon arrival in New York, he is derailed by an overwhelming crush on Pamela Anderson, glimpsed on a hotel television. In order to meet her, he drives across America in a used ice-cream van with his grumpy producer, leaving a wake of bewildered natives.