The more things change, the more he stays the same… 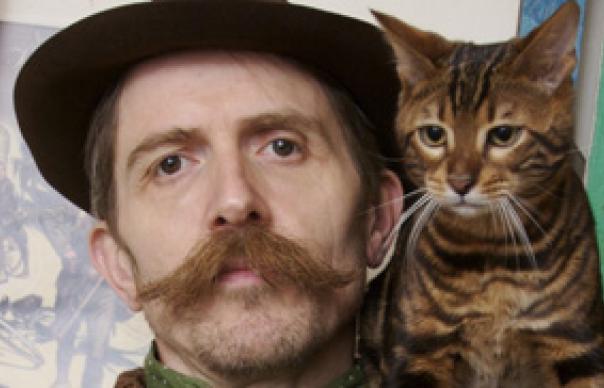 It used to be 1979. It’s now 2009. Billy Childish – author, poet, painter, musician, influence on everyone from Tracey Emin to The White Stripes – will be 50 in December. In that time – the time that U2 have only been U2 – Billy Childish has been The Pop Rivets, Thee Milkshakes, Thee Mighty Caesars, Thee Headcoats, The Buff Medways, The Del Monas, Jack Ketch & The Crewmen, The Musicians Of The British Empire and, of course, Billy Childish. And in that time, the time that music has convulsed and shapeshifted like Morrissey getting a lawyer’s bill, Billy Childish’s musical vision has remained extraordinarily similar.

I remember hearing him on John Peel in the late ’70s, except then his band were called The Pop Rivets and I wouldn’t have known who he was. The song (not included here) was called “Beatle Boots” and, even at the time, even on a radio show where most of the songs were not over-produced, or over-tuneful, or excessively musicianly, “Beatle Boots” sounded like a compressed, one-take, rough headache of a sub-demo.

It was great. And it marked, really, the end of Childish’s brief parallelness with New Wave music. Like Swell Maps’ Nikki Sudden, who began his career fitting in perfectly with post-punk and then veered off into his own world of Stones and Thunders, Billy Childish’s view of things has always been a highly personal one. People stroll into shot on occasion – Jack White, say, or Kurt Cobain (who seems to have fulfilled a Stephen King-like “I am the recommender” role to rough guitar music of the early 1980s) – and sometimes the big world lets Childish onboard for a while (his poetry and painting are now considered “proper” by art and literature types), but none of this seems to affect Childish, who is still entirely concerned with mapping out his own life and mind.

One aspect of that life and mind only is collected here, and in brilliant quantity; a representative selection of the music Childish has made in the past 30 years. He’s run all those bands with the too-many “e”s in their names, and musically they are all variants on the same thing; Childish’s view of the world, seen through two kinds of punk, garage punk and, er, punk punk. It is in a way a sort of pop life in reverse compared to that of the bands he’s clearly in love with. Those bands, ’60s bands as not-that-disparate as The Kinks and The Kingsmen, if they developed, went forwards in time, but Billy Childish’s bands have gone backwards in time.

It’d be slightly inaccurate (but tempting) to say that as Childish’s punk and post-punk contemporaries got into – looking just at the 1980s – funk, brass sections, Scott Walker, country rock, electro, David Bowie, hip hop and Chicago house and “developed”, they lost whatever it was they had, the primal wobbling thing that made them exciting in the first place, while each year Billy Childish and his bands got closer to the primal wobbling thing.

And this is the thing that draws the admirers to him – he records with old mics! He sounds a bit like The Sonics! He sort of references bands six people love like The Beatstalkers! These songs, like Childish himself, do tend to shore up that viewpoint. There’s 51 of them on this double CD, and with the odd exception – the ulto-indiepop of The Musicians Of The British Empire’s “He’s Making A Tape” (“and it’s not for me!” sings The MBE’s Nurse Julie disconsolately), or the slightly Fall-ish “Mass Ignorance Culture” by Jack Ketch & The Crewmen – Archive From 1959 is a couple of hours of rough-arsed, broken-tongued garage rock which, once you stop playing Name That Riff and you set aside the idiosyncratic titles (“Punk Rock Ist Nicht Tot” by Thee Headcoats, “The Day I Beat My Father Up” by the same band), could be from any rough-arsed, broken-tongued garage band of the ’60s.

Of course (well, of course-ish), that’s not really true. Music, as The Who once said, must change. Admittedly, they said it in a terrible song at a point in their career when they’d gone from being the greatest garage band in the world to being a weird, brandy-sodden, neurotic disco-rock band, but they were right. A pop world where everyone recorded at Toe Rag Studios and thought stereo was a channel too far would be a horrible place, just as a world where Elton John samples over a drum beat constitute a “mash-up” is not that good either. But as a personal vision of music, as a vehicle for a unique attitude, and as a compilation of 51 rough-arsed, broken-tongued garage songs, Archive From 1959 is great.