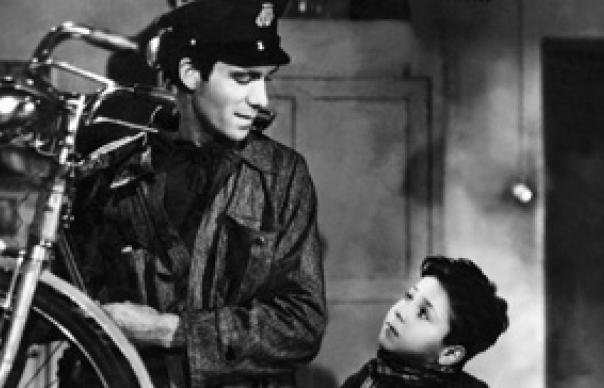 By the time World War 2 ended, serious film-making seems to have become the providence of the Italians. Understandably keen to distance themselves from two decades of Mussolini, they dragged their cameras and equipment onto the city streets with commendable egalitarianism, eager to record working class families, struggling to get by in the aftermath of the War.

Vittorio De Sica’s Oscar winner, Bicycle Thieves, is one of the best Italian Neo-Realist films. The bicycle was the utilitarian symbol of the working class, and here – no spoilers necessary – one is stolen from its owner, long-term unemployed Antonio, on his first day in a new job. In the company of his nine-year-old son, Bruno, he sets off on a desperate hunt round Rome looking for it.

This being an Italian film, there are scenes in both a brothel and a church. The grainy black and white images reinforce the idea that is a social document of sorts, but De Sica never lets socio-realism get into the way of drama: a final sequence, where Antonio stands outside a football stadium looking longingly at rows of parked bicycles – and what he does next – is heartbreaking.

As re-releases go, a better bet than White Christmas.